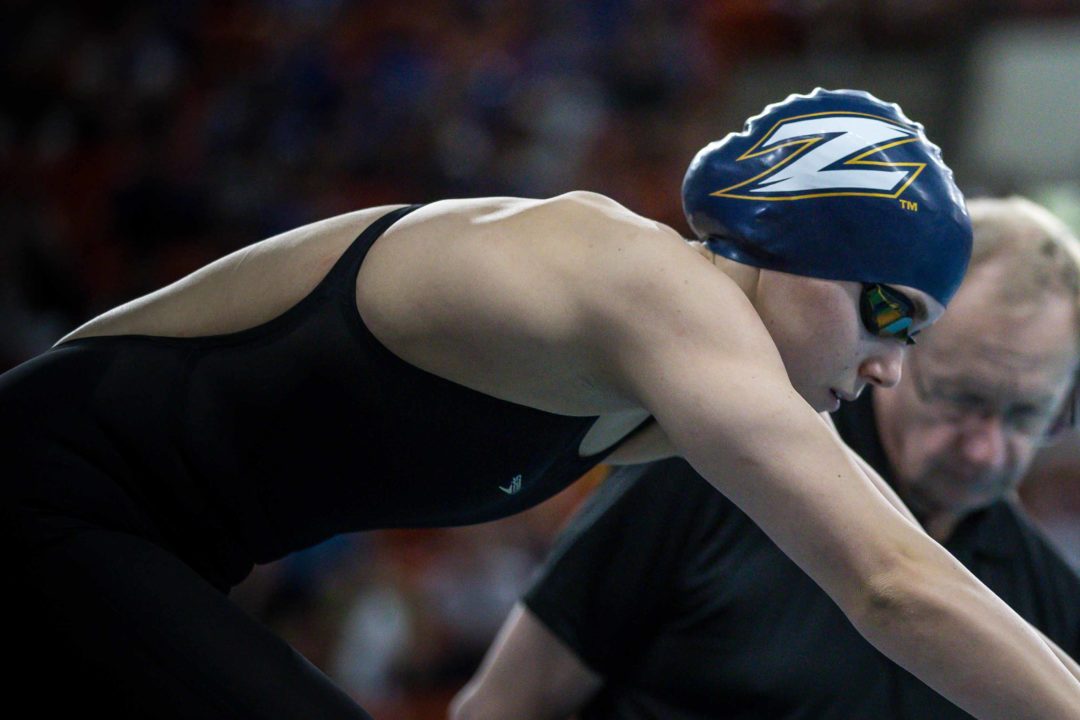 Watson posted a 1:56.42 to win the MAC title in the 200 IM for a 3rd-straight year, and pick up Akron's 5th-straight title in the event. Stock photo via Jack Spitser/Spitser Photography

The 2021 Women’s MAC Championships kicked off today at Eastern Michigan University. The first day of competition resulted in 7-time defending champions Akron trailing Buffalo by 4 points. Today’s results could signify a even tighter team battle than last year, where Akron ultimately won the MAC title by 73 points over Buffalo. As was the case last year, it appears Akron and Buffalo will be battling for the MAC crown, while a tough fight for 3rd takes place.

Buffalo kicked off the meet with a stunner over Akron, winning the 200 free relay in a very close race. Akron established an early lead, with Sarah Watson going first in 22.38, while Buffalo was led off by Jillian Lawton in 22.97. The Zips’ lead, incredibly, was completely evaporated on the 2nd leg, where Buffalo star Toni Naccarella threw down a sizzling 21.61, which was far and away the fastest split in the field. Akron had Rachel Schiffli swimming 2nd (22.47), resulting in a 44.85 split at the 100 mark, while Buffalo was leading in 44.58. The 3rd legs were nearly identical, as Buffalo’s Jenna Krull split 22.52 to Lauren Cooper‘s 22.56 for Akron, resulting in a very slight expansion of Buffalo’s lead. Buffalo anchor Ellie Duley got it done, splitting 22.57 to hold off Akron anchor Victoria Kaufman (22.45), putting Buffalo on the wall with a final time of 1:29.67, and Akron right behind in 1:29.86. Buffalo broke their school record and the EMU pool record with the time. The win by Buffalo snapped a 3-year streak in the event by Akron. Fittingly, the last non-Akron team to win the relay was Buffalo, back in 2017.

The 400 medley relay, which was the final event of the session, started out as another fierce battle between Akron and Buffalo, but Sarah Watson ended up taking the race over on the fly leg to give Akron an insurmountable lead. Madelyn Gatrall (53.84) and Paula Garcia (1:00.35) got Akron started with a 1:54.19 on the first 200, while Nicole Rotenberg (53.27) and Katie Pollock (1:00.75) got Buffalo out to a 1:54.02 on the first 200. Watson then dove in for Akron, blowing the race wide open with a 51.08 fly split, well ahead of Buffalo flyer Clarice Fisher‘s 53.31. Rachel Schiffli brought Akron home in 49.58, a touch off Buffalo anchor Jillian Lawton‘s 49.25. Akron finished with a final time of 3:34.85, with Buffalo touching 2nd in 3:36.58. Another notable split came from Miami anchor Nicole Maier, who led the freestylers with a 48.87. Bowling Green backstroker Daisy Platts led the field with a 52.42. The win marks Akron’s 5th-straight title in the event.

The individual racing of the day was kicked off with a record-shattering performance by Nicole Maier (Miami) in the 500 free. Maier opened up an absolutely gigantic lead on the field, tearing to a 4:39.96 to win by well over 8 seconds. The swim broke virtually every available record, downing her personal best, the EMU pool record, the Miami school record, and both the MAC Championship record and the MAC conference record. Really, she obliterated the records, taking well over 2 seconds off the previous MAC record of 4:42.42, which was also the Miami Record, as it was held by alum Ella Moynihan. The race was beautifully swum from a splits perspective. Maier kept all of her 50s under 29 seconds, and posted 100 splits of 52.39/56.51/57.82/57.77/55.47 respectively. Perhaps most notably, the swim would have put Maier 4th in prelims of this year’s NCAAs, and 7th in finals.

Buffalo’s Toni Naccarella won the 50 free by a huge margin, speeding to a 22.37. Naccarella defended her title in the event, besting her 2020 winning time of 22.48. The 50 free has been one of Buffalo’s best in recent years. Naccarella’s title tonight marked Buffalo’s 8th MAC 50 free title in the past 10 years. Buffalo also holds the conference record in the event with alum Megan Burns‘ 22.04.

Eastern Michigan picked up a title on day 1, with Bethany Berger winning 1 meter diving. Berger got it done by a margin of 10.85 points, tallying up a final score of 303.90.

Why is that? Akron has won the last 7-8 years. Seems like Akron has the better coaching staff. Brian inherited a team that finished last the previous year. In his first year they won going worst to first and have won every year since then.

How many coaches went worst to first in their first year? None I can think of.

Fly and IM were really good, too. Always cool to see a true mid-major conference do well.

Yes, love to see it!