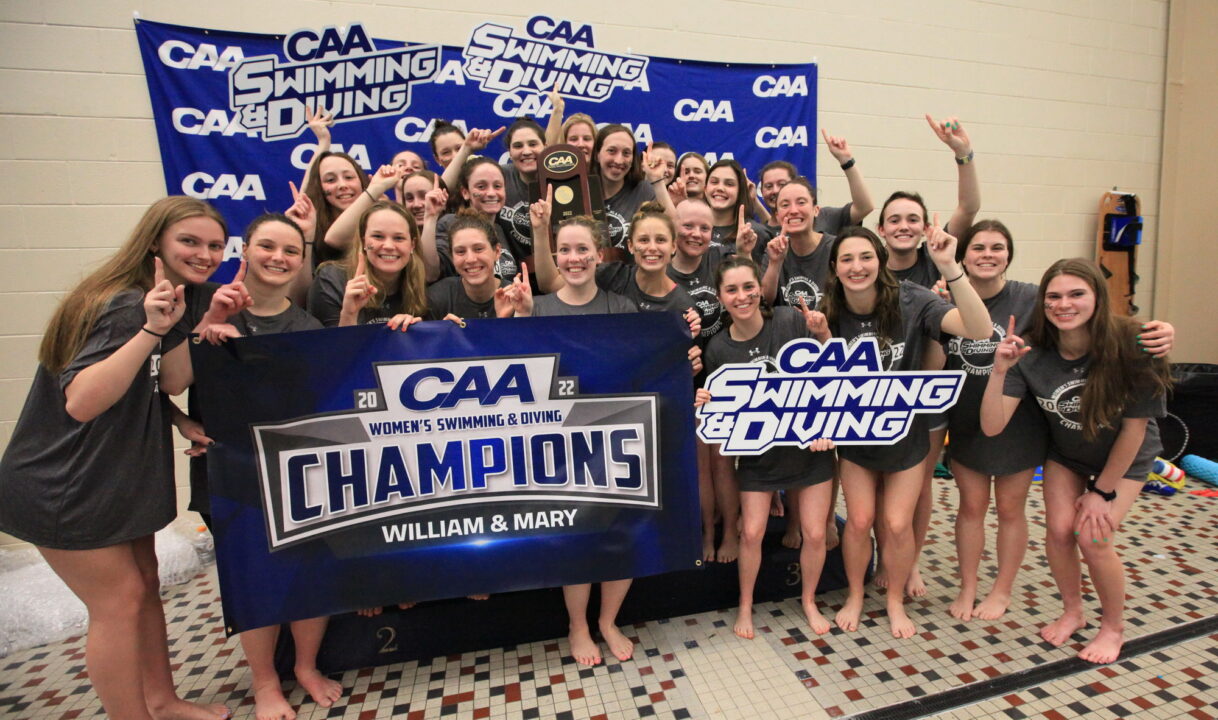 William & Mary took its third-ever title over the weekend, and UNCW took its first title since its 13-year winning streak lasting until 2014. Current photo via Jon Fleming

William & Mary and UNC Wilmington took the CAA titles on the final day of the conference championships, marking W&M’s first title since 2017 and UNCW’s first since 2014.

W&M took back-to-back titles in 2016 and 2017 before going through a championship drought. After leading his team to the title in 2022, coach Nate Kellogg received the CAA Women’s Coach of the Year for the second-straight season.

UNCW’s 14th title is the most of the league so far, and it marks the end of a dry spell after the team won 13 straight titles from 2002-2014. The team’s coach, Bobby Guntoro, won the CAA Men’s Swimming Coach of the Year honor.

Drexel’s Kacper Karnik broke the sole record of Day 4, clinching the CAA meet record in the 200 breaststroke with his time of 1:54.69. Karnik broke his own record, previously 1:56.22. Towson’s Brian Benzig would also have broken the meet record with his 2nd-place time of 1:55.33 if not for Karnik’s swim.

Karnik won the men’s Most Outstanding Swimmer of the Meet in conjunction with UNCW’s Henderson Louviere.

In the women’s 200 breaststroke, W&M’s Annie Tuttle defended her reigning CAA title to take 1st in the event with a time of 2:14.44.

In the mile, sophomore Brooke Knisley won the first UNCW win in the event in 15 years. Knisley swam the event in 16:14.31, an NCAA B cut. There was a much tighter race between 2nd and 3rd place, with Drexel’s Maddie Riley taking silver in 16:46.61 and Towson’s Karlee Carminati taking bronze in 16:48.62. Riley was three or so seconds ahead of Carminati until the last 100, when Carminati was able to narrow the gap.

UNCW also took the men’s title in the 1650. Sam O’Brien’s winning race (15:27.16) marked the first time since 2003 that UNCW won that event. It was a tight race between O’Brien and his teammate Silas Crosby, and the two touched almost at the same time on every 50, though Crosby eventually finished in 15:28.09.

Drexel freshman Federica Nocera cemented Drexel dominance in the women’s 200 back, winning in 1:56.56 and marking the fifth time in the last six years a Drexel athlete has won the event. She was able to beat the No. 1 seed from prelims, Bailey Smith, who took 2nd with a time of 1:58.08.

W&M took another victory in the women’s 100 free thanks to Katie Stevenson (49.89), but the more exciting race came for 2nd, when Drexel’s Chelsea Gravereaux and Lera Nasedkina tied in 50.18. Nasedkina turned at the first 50 first, but Gavereaux made a comeback in the last 50.

Towson defended its 100 free title, though a different athlete from the team won the event–Ryan Baldino. Baldino defeated last year’s winner of the event, Michael Fazio, with his time of 43.98 compared to Fazio’s 2nd-place time of 44.23.

Mira Selling earned her third gold medal of the meet when she won the 200 fly in 2:00.00. She is the second-ever Delaware swimmer to win the event. Her performance at the meet overall won her the women’s Most Outstanding Swimmer of the Meet award.

The diving portion of the meet ended Saturday with Courtney Klausen of UNCW defending her title in the 1-meter to a tune of 276.40 points. She swept both the 1-meter and 3-meter, and her performance earned her the women’s Most Outstanding Diver of the Meet. The men’s winner of the award was Nicholas Newis for his performance earlier in the meet, and UNCW coach Beau Bunn won Women’s and Men’s Diving Coach of the Year.

Congratulations Tribe women. From a cut team to CAA champions💪🏊‍♀️

Or any team excited to watch UNCW bring in freshmen that win events immediately, adds a lot of value to the conference, really makes it exciting!

Big things coming for Delaware! Young team that went from 5th to 2nd in 1 year!

Big jump. You love to see it.

Congratulations to the Tribe! Nate Kellogg first title as head coach with the women’s team.

Congrats to UNCW! Guntoro’s first title as head coach. What a quick turnaround!! A more impressive turn around for the women’s team imo. A fun team to watch. This is great for our local swimming community here in Wilmington

When W&M was unilaterally cancelled by the now fired AD, Nate called a family member who was headed to W&M to let them know before it was public.

Kudos to him then, and now with his W