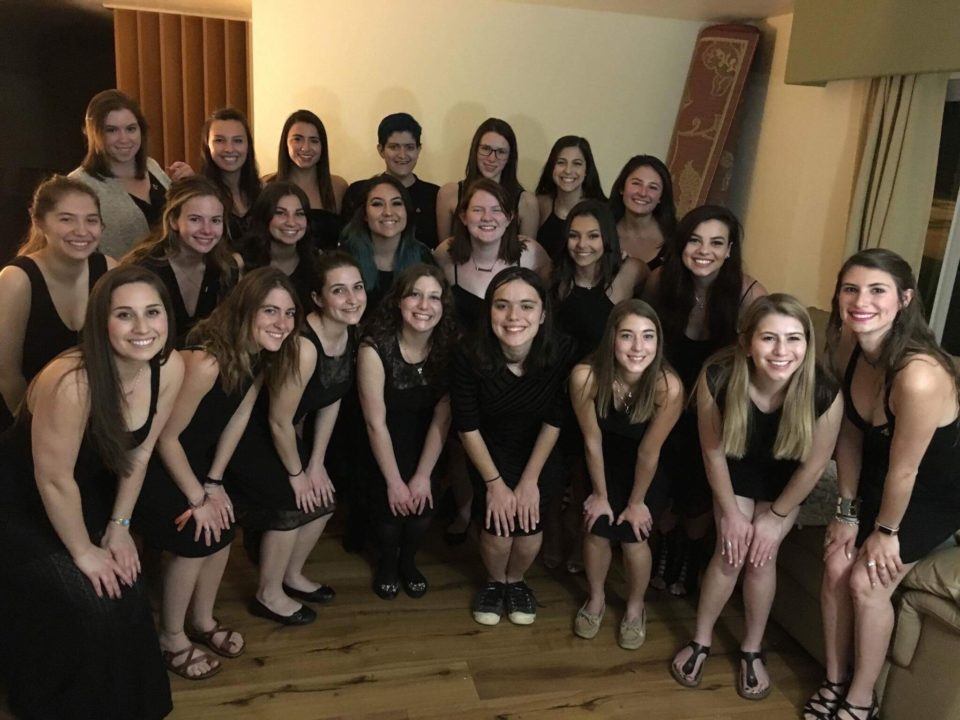 The first time Flori Witenstein visited Colorado State was during the fall of 2014. The standout diver from Sunnyslope High School in Phoenix was in town, trying to determine if whether or not Fort Collins should be her home for the next several years.

When it came to determining where she would dive collegiately, Witenstein had options. She was a star at Sunnyslope and for the Arizona Marlins Diving Club, winning four district championships (2012-15).

As a Jewish family, one of the biggest factors for the Witenstein clan was making sure there was a Jewish community in Fort Collins and at CSU. During that first visit, the family was able to take time to visit CSU’s Hillel house off of Laurel.

Colorado State Hillel “helps to build a community where Jewish values enrich the lives of students during their college years and beyond”, and helped reassure Flori and her family that CSU was a good place for her.

“Being able to actually come here and experience it was great, instead of just driving by,” Witenstein said. “I actually got to go and feel welcomed. That was a huge thing, making sure there was a Jewish community here. Even though it’s smaller here, Fort Collins has a very inviting and happy community.”

At that time, Witenstein had no idea just how impactful she’d eventually be with the Jewish community on campus.

THE BEGINNING OF A SISTERHOOD
Witenstein had always been an active member in her community. Growing up, she participated in a Jewish youth group that participated in many community service projects, including volunteering with Relay For Life. She anticipated being similarly productive during her time at CSU, but did not foresee just how active she’d become.

“I was anticipating being involved with Hillel to meet new people and feel more at home while doing community activities with them,” Witenstein said. “I knew of other schools having a Jewish sorority and I wished our school did, but honestly didn’t even think I’d have time while being a student-athlete.”

It was on a significant Jewish holiday during her sophomore year that Witenstein was presented with an opportunity to do more than just meet other like-minded students.

“It was at a Passover Seder, and the Rabbi said that these two girls wanted to make a club of Jewish women [at CSU],” Witenstein explained. “I met the girls (Sara Sladek and Carley DeRosa, who recently graduated from CSU) and it made me really happy people wanted to form a Jewish club on campus. I was interested in being more involved with the Jewish community here and meet more people, so this news got me even more excited in continuing my journey at CSU.”

The club was termed Achayut, meaning “sisterhood” in Hebrew. The club wouldn’t be “just a club” for long, however.

LEARNING ABOUT GREEK LIFE
Witenstein came to CSU to compete on the diving boards at a high level and express herself freely.

She did not anticipate being in a sorority.

But the Achayut club hadgotten off the ground successfully in 2016, and grabbed the attention of Sigma Alpha Epsilon Pi (ΣΑΕΠ), a prominent national Jewish interest sorority.

It didn’t take long for Witenstein and the other eight founding members to realize the benefits of formally associating with the national organization.

“We decided as a group we wanted to become a national sorority in order to gain the resources and recognition we need to reach as many Jewish people as possible,” Witenstein said. “In addition, it gives us a way to make connections across the country. We have the comfort of going to other states knowing we can hang out with or stay with other Sigma ladies. These connections could lead to other opportunities, as well.”

Chayla Furlong, the executive director of SAEPi, visited CSU and the club that Witenstein helped form, and deemed it worthy of colonization into the SAEPi network of chapters. The process began in September of 2016.

SAEPi was founded in 1998 by a group of Jewish women at the University of California, Davis. There are now 19 chapters, with CSU being the most recent confirmation as of Aug. 18 of this year, with Witenstein serving as its first secretary on the executive board.

Her job includes conducting meeting minutes and helping communicate with the rest of the sorority (currently 16 members strong heading into its third-ever rush), as well as serve as the administrator of the group’s Facebook page.

Meanwhile, Witenstein was developing as a diver on the both springboards on the pool deck at Moby Pool.

BECOMING A TEAM LEADER
As the 2017-18 season is about to begin, Witenstein is the most experienced diver on the CSU roster. Entering her junior season, Witenstein is a team captain for the first time, joining swimmers Ida Donohue and Gianna Salanitro.

Her responsibilities include acting as the communication liaison at times between the coaches and the athletes, organizing team outings, helping create and enforce team rules and rallying the team.

Her experiences and the skills she’s gained as a leader and founder of the SAEPi chapter have translated to how she handles her new team role. The SAEPi sorority is “devoted to friendship, motivation, opportunity, leadership, and well-being” – all of which are attributes that Witenstein has carried over to her diving.

“Having the experience of leading the sorority and getting that off the ground has actually really helped her with her diving,” Rams diving coach Chelsea Popplewell said. “She has a little bit more confidence in standing up for what she thinks, and she’s been able to branch out and get other people on board with her, which is something that I think came directly from having to recruit girls into her sorority.”

Being a captain of a major collegiate diving program is a hefty responsibility, but also one that Witenstein has hoped to earn.

“I’ve always wanted to be a team captain in college,” Witenstein said. “It’s pushed me to be a leader. I’ve taken on a lot of leadership roles, but I am shy in certain situations. It’s pushed me out of my comfort zone, and taught me new leadership skills.”

SAEPi is also welcoming to all individuals, whether they are Jewish or not (although an interest in Jewish culture and Judaism is preferred). This attitude has also proven to be valuable for Witenstein as a team captain.

“As the dive captain, it can be hard to integrate the divers with the rest of the team, just because we are a much smaller part of the team,” Popplewell explained. “She really wants this to be one, all-inclusive team. She has been proactive about it; getting out in front of the entire team and getting everyone included.

BUILDING RELATIONSHIPS AND LEAVING A LEGACY
Witenstein, a psychology major, has engaged and interacted with a diverse group of different people on campus than the average CSU junior. That has been one of the more gratifying aspects of what she’s done on campus – both in and out of the pool.

“I remember in high school there was the swim team, and then there were the divers,” Witenstein said. “In college I was looking for a swim and dive team. I’m friends with swimmers and divers. My roommate in the dorms freshman year was a swimmer (Nina Stitt). I’m really close with the swimmers and divers. We are one team, which is really good.”

She has developed significant bonds with her sorority sisters, as well.

“The group of girls that have worked together to make this organization happen and be recognized at CSU, the struggles we’ve been through to make that happen has brought us closer,” Witenstein stated. “It’s not just hanging out; it’s because we’re working together, and that makes the relationships more meaningful.”

Flori knows she hasn’t accomplished everything alone. A copy of this season’s CSU swim & dive roster can serve as a list of some of her biggest supporters and fans.

“I was nervous about being the only Jewish person on the team,” she said. “There’s a smaller community of Jewish people in Colorado and people have less knowledge of the traditions and my culture. I educated a lot of my teammates, which I totally enjoyed doing. Everyone has been very supportive. When I go to the Shabbat dinner, a couple times some teammates or other friends have come with me just because they’re interested.”

In a little more than two years, Witenstein has accomplished a lot. What means the most to her, however, is the people she’s made connections with and the way she’s been able to express herself while competing in the sport she loves.

“Since I have been working with this organization and playing a big role in it, it’s made this school feel more like home,” Witenstein said. “We’re making history. We have the first-ever Jewish sorority at CSU. We are leaving a legacy, and it’s been very rewarding.”

Ultimately, however, Flori came to CSU because of the diving program, the team and the city of Fort Collins. Her experience has not been disappointing.

“After meeting with the girls and coaching staff and exploring Fort Collins, I knew being a Ram right for me,” she said. “Finding a Jewish community was definitely a huge pro in choosing this school, but being a student-athlete and joining the CSU swim & dive team was what brought me here in the first place. I began my college journey with one amazing swim & dive family and now I have another CSU family. I love being able to compete with and support my teammates, and I love seeing my Sigma sisters in the stands supporting me at home competitions. It’s great to have another group of friends to fill the stands and support my team.”

So proud of this girl! Go Flo!