WISCA Polls: Middleton Back On Top For Week Eight

After falling from the top spot for the first time this season, Middleton is now the top ranked team again... Current photo via WISCA

After falling from the top spot for the first time this season, Middleton is now the top ranked team again in Division 1. Madison Egewood still sits on top of the division 2 rankings after plenty of movement within their division.

After both Waukesha South-Mukwonago and Arrowhead passed Middleton last week to move up to first and second respectively, Middleton is now back on top with a comfortable 49-point lead. Last week was the first time this season that Middleton did not receive the top rankings in division 1. Waukesha and Arrowhead only dropped one placing each, now sitting in second and third.

Like Middleton Stevens Point also made a large jump, pushing themselves into the top 10 by moving up five places from 12th to seventh. With 291 points they’re comfortably in the top 10 for the first time this season.

Brookfield East dropped from seventh to eighth and Germantown fell from eighth to 10th. Sun Praire, Cedarburg, Madison West, and Verona Area-Mount Horeb all retained their placings from last week. Menomonee Falls-Hamilton dropped out of the top 10 rankings after being ranked 10th last week. 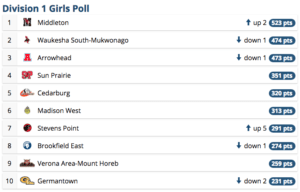 Whitnall moved up from seventh to third, Merrill moved from 10th to eighth, and two new teams moved into the top 10. Greendale rocketed up the rankings to finish fourth this week with 390 points after settling for 18th the week before. Monroe/New Glarus jumped up two placings from 12th to 10th.

The addition of two new teams in the top 10 caused several teams rankings to drop. Baraboo fell from third to fifth, Whitefish Bay from fourth to sixth, Tomahawk from fifth to seventh, and Shorewood from sixth to ninth. 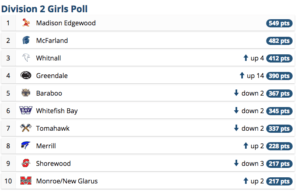