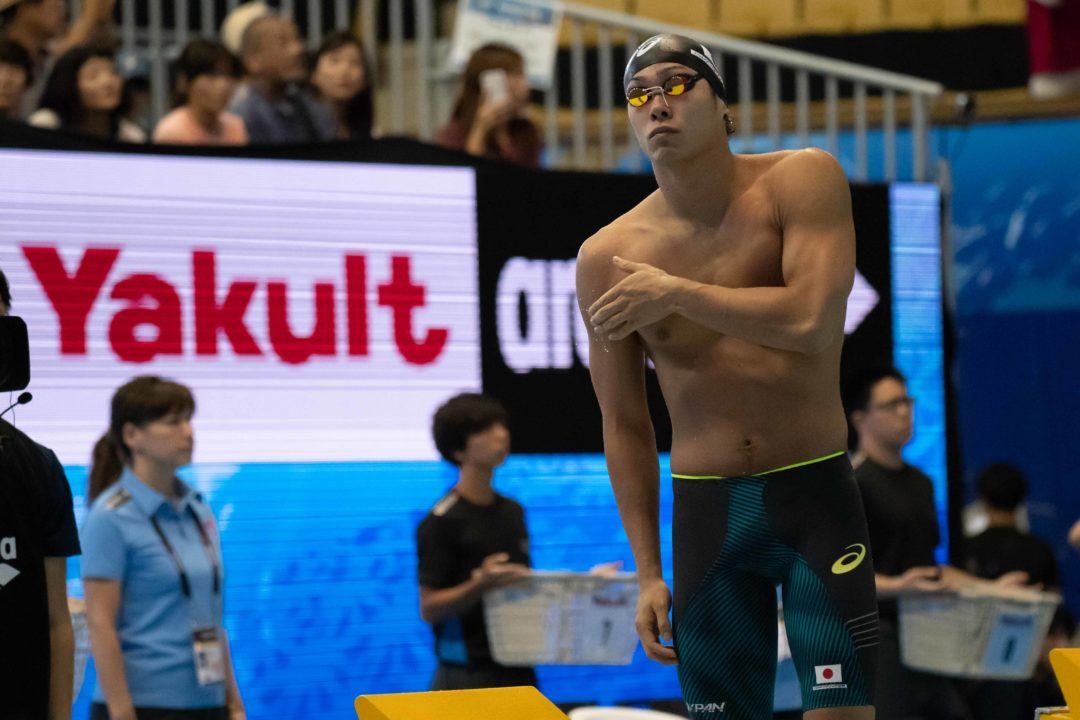 Sprinter Katsumi Nakamura is just one of the Japanese swimmers who cracked the world's top 5 tonight in Tokyo. Archive photo via Mike Lewis/Ola Vista Photography

Day 1 saw breaststroking ace Yasuhiro Koseki nail a new Japanese national record in the men’s 100m breast and the Pan Pacs champ was back at it on the final day of his nation’s World Championships Selection Meet.

Sprinting his way to the wall first in the men’s 50m breaststroke sprint, Koseki collected a winning time of 26.02, beating the previous Japanese National Record in the event by .04. He won the race by almost half a second and cemented himself as the premier Japanese breaststroker to watch in Hangzhou this December.

Also in the race was Taku Taniguchi, the teen who finished 5th in 26.82 to establish a new Japanese National High School Record.

For Koseki, the 26-year-old Miki House athlete now ranks #2 behind in the world in this sprint breast event.

Koseki also got the job done in the 200m distance to sweep the breaststroke events here in Tokyo. In that longer race Koseki snagged a winning effort of 2:02.65 to slide in the world rankings in the #3 spot behind two Russians in Kirill Prigoda and Anton Chupkov.

Another man made his presence known with a second national record in the form of Takeshi Kawamoto. Yesterday Kawamoto matched the Japanese national standard in the 50m fly for gold, but tonight he took things up a notch to surpass the 100m national record outright.

Backstroking mainstay Ryosuke Irie was back in the pool tonight as well, sealing up his win in the 100m sprint. Irie won the race by almost a full second, notching a gold medal-garnering effort of 50.20, just .55 off of the Japanese national record of 49.65. Ever the consistent race, Irie’s time tonight was almost identical to the 50.22 he posted at the World Cup in Eindhoven that rests as #2 in the world this season.

The women’s 50m breaststroke saw Miho Teramura crush a winning time of 30.37 to fall just .14 shy of the national record.

Katsumi Nakamura, who took the men’s 50m free yesterday, doubled up with a monster 100m free here tonight. His winning time of 46.56 touched just .02 outside of the 46.54 national record he set last year at the World Cup in Tokyo.

Nakamura’s time tonight checks-in as the 5th fastest mark in the world this season.