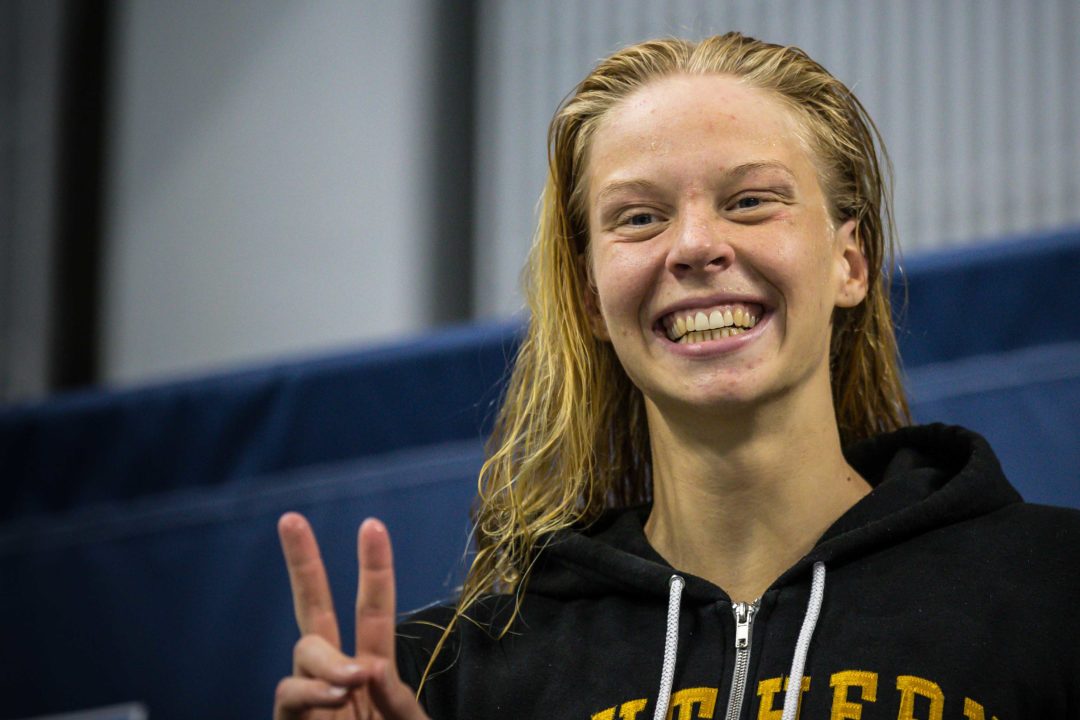 Sweden’s Louise Hansson threw down a personal best time of 57.35 in the women’s 100m fly at Canada Trials, qualifying first overall for finals (although she’ll swim in the consolation final because she’s a foreign swimmer).

Hansson has been on fire in Toronto, putting forward a 55.17 100m freestyle in prelims and a 1:00.35 100m backstroke to win the consolation final. With three solid 100m swims, Hansson is almost guaranteed to have a huge impact on the Swedish relays at the World Championships this summer. With 100m butterfly and 100m freestyle world record holder Sarah Sjostrom on the relays as well, it does beg the question of who would swim what leg of the medley relay.

It makes the most sense to put Hansson on the backstroke leg after her 1:00.35. She was just shy of Sjostrom’s Swedish national record of 59.98 that she set in Eindhoven in 2015. When it comes to the 100m fly, she’s just under two-seconds shy of Sjostrom’s record. In the 100m freestlye she’s even further back, shy of the record by approximately three-and-a-half seconds. With top Swedish swimmers like Michelle Coleman in the 100m freestyle, it makes the most sense that Hansson would swim backstroke. Jennie Johansson would swim the breaststroke as usual with a PB of 1:06.30.

If you take Johansson, Sjostrom, and Coleman’s relay times from the 2o17 Championships along with Hansson’s backstroke time, they would have finished with a time of 3:53.93, which would have ranked them third behind the United States and Russia, but ahead of Australia in 2017.

Note that breaststroker Jennie Johansson announced her retirement a year ago, so Sweden will also be looking for a replacement on that leg. Louise’s younger sister Sophie, who is a freshman at NC State and is not competing at this meet, is the likely challenger for that throne. Her best is a 1:07.5, but she made huge strides during this NCAA season as well.

Hansson’s rise to prowess in backstroke makes Sweden an absolute medal threat in the medley relay. Prior to competing at Canadian Trials Hansson had a very strong NCAA season with USC, breaking Kelsi Dahlia’s 100 yard butterfly NCAA record of 49.43 with a 49.34 in the prelims at Pac12s and lowering it further to a 49.26 in the NCAA final. She also won the 200 yard fly at NCAAs in 1:50.28.

thanks for the analysis, was just asking about this. Sweden is looking good! Expect Sophie to also throw down fast LCM times

Looking at the swimmers’ best times from 2017-18 and 2018-19, Sweden is actually only ranked 10th in the medley relay. Coleman has been struggling with injuries, so it’s still a long way to medal contention. It’s possible that the teams listed below can be tweaked somewhat, but this is roughly where the countries stand today. I also excluded Ikee from the japanese team, due to her ongoing cancer treatment.

Yes in your right, but however I don’t think you should be basing your predictions off this until after trials from each country! Coleman always swims fast in relays and I can see her going 52 high, Louise obviously doesn’t do a lot of back but a bit of training and she can easily go under a minute . Sophie will definitely improve after a year in the NCAA system and I think we all know that Sjostrom is a lot faster than 56.1 and could probably split a 55.3? However this can happen for every team and it will be easier to predict close rock summer

Jennie Johansson has quit… still the medley looks good with Sophie Hansson in there. And come worlds Coleman might do the back

Pretty sure Jennie retired quite some time ago. Sophie Hansson will swim breast.

It’s in the article

Yep, I believe it was added after the article was published.