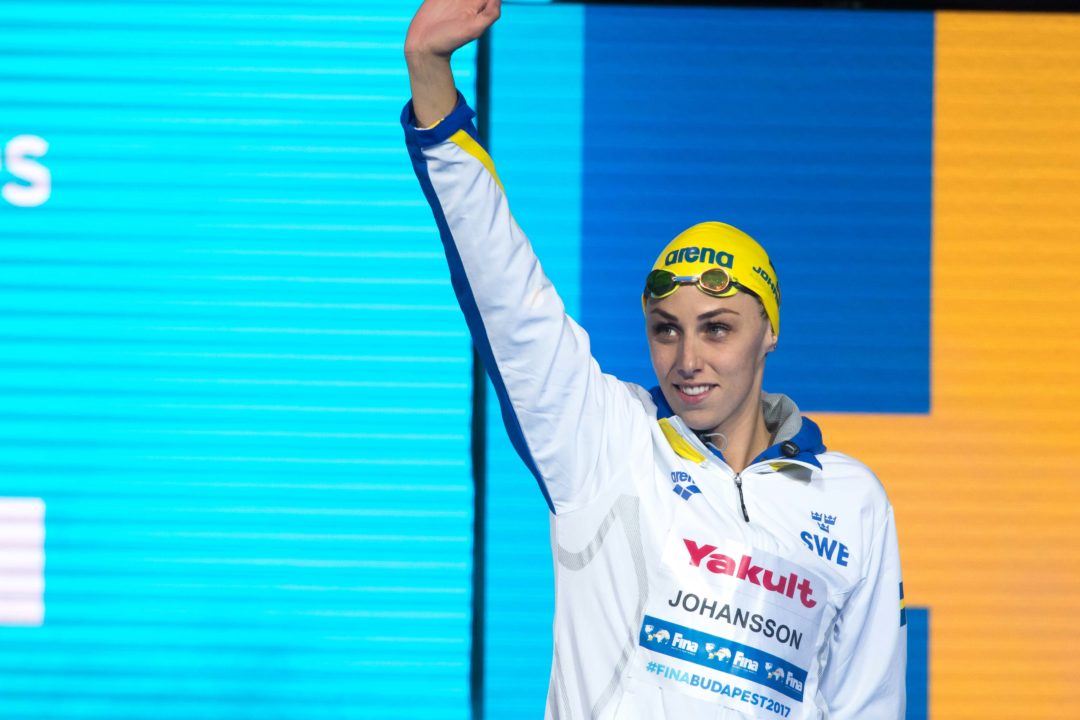 Two-time Swedish Olympian Jennie Johansson has announced her retirement, saying in an Instagram post on Tuesday that the decision has grown... Archive photo via Mike Lewis/Ola Vista Photography

Felix Auboeck took down his own Austrian national record during the prelims heats of the men’s 400 free on Day 1 of 2020 Tokyo Olympics.

Sarah Sjostrom, the World Record holder in the 100 meter butterfly, swam her best time since 2017 in prelims of the 100 fly 6 months after breaking her elbow.

Lewis Clareburt improved upon his record during heat 3 but Brendon Smith quickly took it for himself during the next heat.

Two-time Swedish Olympian Jennie Johansson has announced her retirement, saying in an Instagram post on Tuesday that the decision has grown over time. The 29-year old Johansson was the 2015 World Champion in the 50 breaststroke and also swam on Sweden’s silver-medal winning medley relay.

She never won an Olympic medal, but besides the 2 World Championship medals also won 11 European Championship medals – including the 2016 long course title again in the 50 breaststroke. The retirement comes as Johansson was swimming some of the best times of her career. In 2017, she swam a 1:06.30 in the 100 breaststroke to break the Swedish National Record.

The Swedish women’s 400 medley relay finished 5th at the 2017 World Championships with Johansson swimming the breaststroke leg and splitting 1:05.76. That was the 3rd-fastest split in the finals field, behind only American Lilly King and Russian Yulia Efimova. She missed the final in the individual 100, however, swimming a 1:07.93 for 16th place in the semis.

Sweden’s new top breaststroker is 20-year old Sophie Hansson, who swam on Sweden’s prelims medley relay last year as well. Her flat-start best is 1:07.59, and like Johansson, she’s a better 50/100 breaststroker than 200 breaststroker.

“I have come to the decision to finish my swimming career. A decision that has grown over time and it brings a mix of emotions. It is very difficult to leave behind something that has been a huge part of my life for so long. At the same time, it’s a choice that I feel satisfied making and I am very grateful to leave my swimming career behind me, knowing that swimming has formed me to the person that I am today.
–
As I reflect on my 20-year long swimming career that started in a small country town, I feel privileged to have been able to achieve dreams that I had since I was a kid. To stand atop the medal dais is a feeling that I cannot even begin to describe. Yet for me it is not the medals themselves or the records that I broke that make me the most proud. It is the entire journey in itself.
–
This journey would never have been possible without all the wonderful people that I’ve met along the way. Training partners, coaches, clubs, support staff, sponsors, competitors, fans and supporters: THANK YOU for supporting me in both good times and in hard times and for making all the hours and energy I put into this sport worthwhile. Thank you for being part of my journey!
–
To my family, friends and most of all my parents: THANK YOU for making all of this possible. I am so grateful that you will continue to be there as my strongest supporters now that the next chapter begins.
–
Every journey has its time and it is time for me to leave it to the next generation of swimmers in the pool as I embrace new and exciting pathways.
–
Once again, thank you! ❤️”

congrats on a stellar career and best of luck!