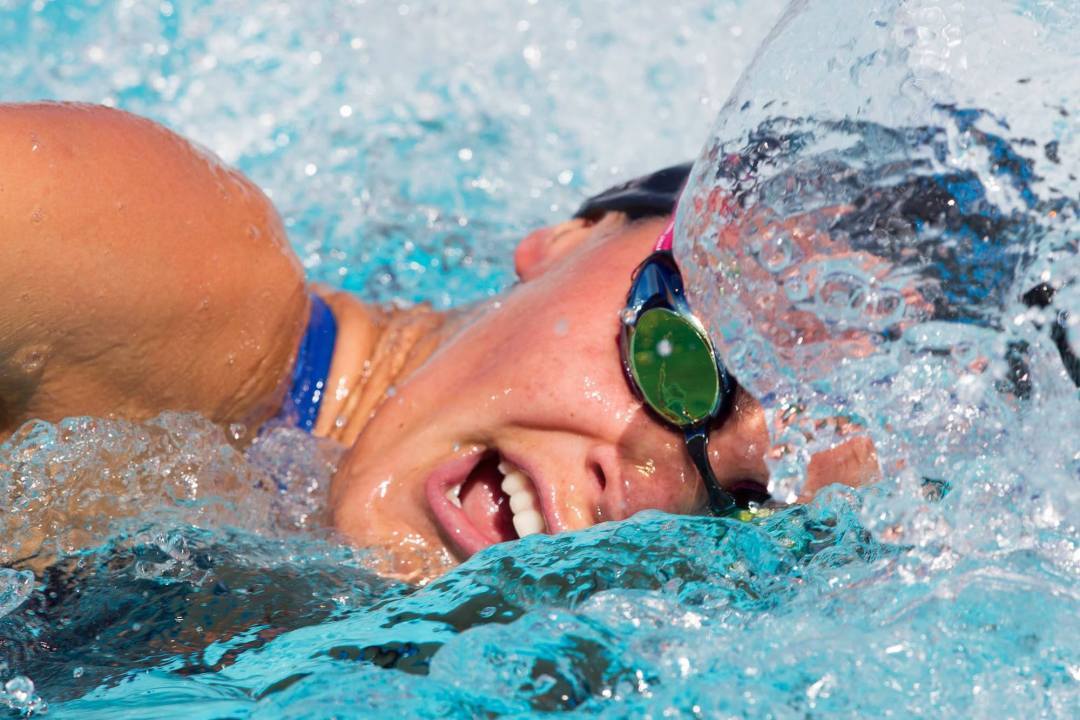 Linnea Mack had a hand in three wins for the UCLA Bruins on Friday afternoon Archive photo via Tim Binning/TheSwimPictures.com

Boise State vs. UCLA vs. Kansas

Madison White was a double-winner up in the 100 and 200 backstrokes, and sprint star Linnea Mack won the 100 free and two relays for the UCLA Bruins on Friday afternoon to top visiting the Boise State Broncos and the Kansas Jayhawks.  After Mack posted a quick 24.89 leadoff leg to the win the 200 medley relay, White took the reins for the individual backstrokes, posting times of 54.78 and 1:58.90 to easily better the field in each event.

LOS ANGELES, Calif. – In the first meet of the New Year, the UCLA swimming and diving teams dominated Kansas and Boise State on Friday afternoon.  The Bruins downed the Jayhawks 202-92, while defeating the Broncos 164-130.  Out of 16 events, UCLA posted 10 first-place finishes between the lane lines and on the boards.

200 Medley Relay
The Bruin A squad kicked things off with a win in the 200 Medley Relay.  Linnea Mack, Sarah Kaunitz, Katie Grover, and Caroline McTaggart posted the top time of 1:42.12, which was also a new meet record against both the Broncos and the Jayhawks.  The Bruin B team—Madison White, Isabella Goldsmith, Amy Okada, and Maisie Jameson—placed third behind the Boise State A squad with a 1:44.38.

100 Breaststroke
The Bruins swept the top three spots in the 100 Breast.  Sarah Kaunitz nabbed the top time of 1:04.36 to post a new meet record against the Broncos.  Winkler and Goldsmith finished second and third, respectively.

200 Butterfly
Continuing her dominance in the butterfly, Okada swam the top time in the 200 Fly (2:02.30) to set a new meet record against the Broncos.  The freshman out-touched fellow Bruin Katie Grover by .06 seconds.  Delisle swam the fourth-best time of the event (2:05.27).

100 Freestyle
Three Bruins finished in the top five in the 100 Free, led by Mack with a top time of 49.77.  The mark was a new meet record against both opponents as well as an NCAA B Qualifying time.  McTaggart and Sarah Kaunitz placed third and fourth, respectively.

400 Individual Medley
In the final individual event of the day, Goldsmith dominated the field with an exhibition time of 4:22.19 in the 400 IM.  Also swimming exhibition swims, Lisa Kaunitz and Sandra Soe clocked in at 4:28.13 and 4:34.49, respectively.

400 Freestyle Relay
In an exhibition swim, the Bruin quartet of McTaggart, Mack, Sarah Kaunitz, and White posted the top time of 3:22.08 in the 400 Free Relay.  Also swimming exhibition swims, the B team—Jameson, Steffen, Okada, and Raukar—clocked in at 3:29.59, the C team—Amberg, Winkler, Reid, and Lisa Kaunitz—posted a 3:31.31, and the D squad—Kwok, Burnham, Campbell, and Goldsmith—checked in at 3:34.91.

The Bruins are back in action next week when they host Utah on Friday at 1:30 p.m. as well as the Bruin Diving Invitational, which runs Friday through Sunday.

The Broncos captured four of the 14 swimming events, led by two victories apiece from senior Brittany Aoyama and junior Emma Chard. Aoyama captured the 50 free along with her signature event, the 100 fly, and Chard swept the 200 and 500 frees. Boise State did earn the maximum points in the meet-closing event, the 400 free relay, due to UCLA exhibitioning its teams, although the Bronco A team of Aoyama, Chard, Katelyn Martin and Felicity Cann finished second to the UCLA A quartet by just 0.27 of a second, and the Bronco B team of Cody Evans, Emmie Jennings, Abbey Sorensen and Ally Kleinsorgen took third in 3:29.19 to edge UCLA’s B team by 0.40 of a second.

“The team was truly a mixed bag today. We had some really good in-season times while it also looked like we had a few victims to a long training camp, but we’re happy with the performance,” said Boise State head coach Jeremy Kipp. “We would have liked to win more races but both UCLA and Kansas offered some excellent competition.”

“Brittany continues to have an excellent senior year,” Kipp said. “I was surprised, to be honest, because she had worked really hard over the camp, but she just keeps getting faster. It’s been really fun to watch her take it to a new level.”

After the 3-meter diving competition, Aoyama and Mack engaged in another duel, this time in the 100 free. Mack would get the edge this time, clocking a 49.77, just 0.12 of a second ahead of Aoyama. The Broncos would get their final two victories in back-to-back events later in the meet, as Chard and Aoyama took the 500 free and 100 fly consecutively. Chard and Cann once again went 1-2 for the Broncos, with Chard’s winning time of 4:53.11 over three seconds ahead of Cann’s 4:56.88 and nearly four seconds ahead of UCLA’s Michaela Merlihan in third. Aoyama followed in the next event, the 100 fly, by clocking a 53.39 to beat UCLA’s pair of Amy Okada and Katie Grover by 2.30 seconds and 2.88 seconds, respectively.

“Emma sweeping a very good field in both freestyle events was good. She looked like she raced well and was really feeling the stroke,” Kipp said. “Again, coming off of a camp with her we were not sure where she would be but she rose to the challenge.”

Boise State turned in other top-three finishes in various events, beginning with the meet opener, the 200 medley relay, in which the foursome of Ally Kleinsorgen, Robin Pinger, Katelyn Martin and Cody Evans clocked a 1:44.38 to finish second behind UCLA’s winning time of 1:42.12. Sorensen turned in a pair of top-three finishes in each of the backstroke events, taking second in the 200 (2:01.62) and third in the 100 (56.24), while Kleinsorgen took fourth in the 100 with a time of 56.34. Junior Emily Mathis was third in the 200 breast (2:20.93) while freshman Robin Pinger finished fourth in both breaststroke events.

LOS ANGELES – Madison Straight brought in the new year by touching first in the 400-yard individual medley at Spieker Aquatics Center in Los Angeles on Friday afternoon. The Kansas junior edged fellow Jayhawk Libby Walker by 11-hundredths of a second to take the win, and Haley Downey gave the Jayhawks the top-three times in the event by finishing seconds behind Straight and Walker.

Straight’s victory marks the second this season in the 400 IM for the Fort Worth, Texas native. Finishing in 4:29.23, the junior posted her second-fastest time of the season in the event. Her time of 4:22.43 at the Kansas Classic in November stands as her fastest time this season.

“With the 400 IM being my last race of the day, I really focused on finishing the meet strong,” Straight said. “I used Coach Campbell’s advice on building each 100 of each stroke and then giving it all I had in the freestyle. I saw Libby down a few lanes right with me so it motivated me to really race until the end.”

Walker’s second place finish added to a solid day for the Columbia, Missouri native, after picking up third place finishes in the 1,000-yard freestyle and 200-yard butterfly earlier in the afternoon. The sophomore just missed a second-place time in the 1,000 free, touching at 10:12.54, four-hundredths of a second behind UCLA’s Sandra Soe.

“Haley and Katy (Schlies) did very well and gave it their all in the next heat as well,” Straight added. “Our IMers have worked very hard this year in each and every practice, and I think that showed a little bit today. I’m excited to see what we can do at conference.”

The Jayhawks’ day ended with third and fourth place finishes in the 400-yard freestyle relay. Haley Bishop paced the Kansas A team with a 52.70 split, followed by a 52.79 split from Carly Straight. Nusbaum completed the third leg in 52.63, before Yulduz Kuchkarova brought it home with a 52.17 split for a team time of 3:30.29. The B team of Breonna Barker, Leah Pfitzer, Hannah Driscoll and Taylor Sieperda finished in 3:35.22.

In diving action, Nadia Khechfe finished seventh on the one-meter board and Amanda Maser took eighth on the three-meter board.

“It was an extremely fast meet from the start,” head coach Clark Campbell said. “We ended the day very strong, and it will give us some momentum going into the USD shootout tomorrow”

The Jayhawks have little time to recover, as they travel over 100 miles down the coast of California to San Diego for the University of San Diego shootout on Saturday. The meet is slated to begin at Noon CT, and will feature Colorado State, North Texas and the host Toreros.