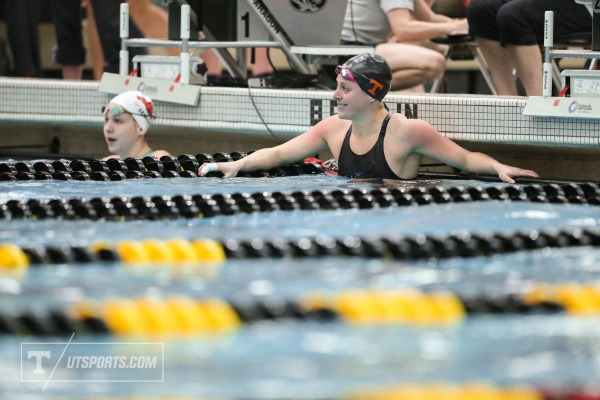 The Tennessee men and women each picked up a dual meet victory against South Carolina today, with the women's meet coming down to the wire. Current photo via Craig Bisacre

The Tennessee men and women each picked up a dual meet victory against South Carolina today, with the women’s meet coming down to the wire. It came down to the final event, as the Vols went 1-2 in the women’s 200 free relay to win the meet by 13 points.

COLUMBIA, S.C. — The Tennessee men cruised and the women rallied in the final event to sweep South Carolina on Friday to open the spring swimming and diving schedule at Carolina Natatorium.

The women’s meet came down to the final event. Trailing by a point heading into the 200 freestyle relay to end the meet, the UT team of Madeline Banic, Alex Cleveland, Kira Toussaint and Erika Brown won the race in 1 minute, 32.21 seconds to deliver a 155-143 Tennessee victory.

“We wanted to put people in different events to practice racing, and South Carolina was really tough today,” Tennessee head coach Matt Kredich said. “They made us race. We’ve been out of competition for seven weeks now, so it was a good wakeup from hibernation.”

Additional Tennessee winners included: sophomore Joey Reilman in the 200 backstroke (1:48.87) and junior Peter John Stevens in the 100 breaststroke (53.27). The Vols won both relays.

The men also benefitted from a springboard sweep by junior Liam Stone; diving preliminary scores on 1-meter and 3-meter carried over to scoring against South Carolina.

The Vols’ next meet with be the home regular-season finale against Georgia at Jan. 21, beginning at noon at Allan Jones Intercollegiate Aquatic Center.

Comments from Tennessee head coach Matt Kredich: “Sam McHugh had a great meet. His freestyle’s been good this year, so we put him in the mile and he swam a great race. He and Taylor Abbott had the 200 fly not long after that, and they did really well in a difficult double. Kyle DeCoursey’s 200 free gave the team a big lift. All three of our men’s backstrokers — Joey Reilman, Nathan Murray and Matthew Garcia — each put together at least one good race today. Peter John Stevens continues to progress in the 100 breaststroke and tonight was one of the best tactical races he’s put together.

“For the women, it was a really exciting meet. We put together a lineup that would be competitive with South Carolina. Colleen Callahan was in some different races today. Meghan Small continued to make some progress. With her twin brother [Jeremiah] swimming for South Carolina, it was a little bit of a homecoming for Micah Bohon, and she put together a good meet. Some people stepped into leadership positions, like Christina Paspalas. Meg Wiggins is evolving into one of our go-to swimmers. Same with Alex Cleveland, who touched the wall in some close races.”

LUMBIA, S.C. — The University of South Carolina Swimming & Diving team dropped its spring season opener Friday evening to Tennessee. The Carolina men fell 160-102, while the women dropped a 147-115 decision at the Carolina Natatorium.

For the men, Jonathan Boland picked up a win in the 100-yard backstroke, Nils Wich-Glasen finished first in the 200-yard breaststroke and Fynn Minuth earned a victory in the 500-yard freestyle.

Jordan Gotro earned two podium finishes on the boards, taking third in the 1-meter with a score of 288.80 and second on the 3-meter after posting a mark of 319.65.

The Gamecock men finished second in the 400-yard medley relay, followed by a third-place finish in the 1650-yard freestyle by Akram Mahmoud with a time of 15:17.29 to earn a B cut.

Newcomer Itay Goldfaden placed the highest for the Gamecocks in the 50-yard freestyle when he finished second after a time of 21.02.

Jonathan Boland led Carolina in the 100-yard freestyle as he placed second with a time of 45.88, followed by Patrick McCrillis in fourth after swimming a time of 47.23.

Boland picked up a second place finished in the 100-yard butterfly after swimming a time of 49.51, followed by Caleb Tosh in third with a time of 49.90.

The last race of the day was the 200-yard freestyle relay. Kentucky took the top spot, while Carolina’s top team placed second.

After taking the third spot in the 400-yard medley relay, the Gamecocks took second in the 1650-yard freestyle after Sarah Smith swam the race in 17:03.95. Elizabeth Maltby placed third with a time of 17:13.35 and Megan Carlson took fourth after finishing in 17:19.64.

Heather Merritt led the Gamecocks in the 200-yard freestyle, finishing second in a time of 1:50.62, while Edith Lingmann took fourth following a time of 1:51.67.

Edith Lingmann posted the highest finish for the Gamecocks in the 100-yard freestyle with a time of 51.25, good for third place.

Emily Cornell swam into second place in the 200-yard backstroke with a time of 2:01.24, and Heather Merritt came in third after swimming a time of 2:02.97.

Carolina swept the 200-yard breaststroke with Barksdale in the lead, with a time of 2:15.91 to earn first place and a B cut. Dirrane took second with a time of 2:18.07 and Brittany Oxley came in third after finishing in 2:19.77.

South Carolina finished third and fourth in the 200-yard freestyle relay to round out the evening.

This looks like Tennessee women were swimming some off events and underestimated South Carolina. At least it made for a exciting meet!