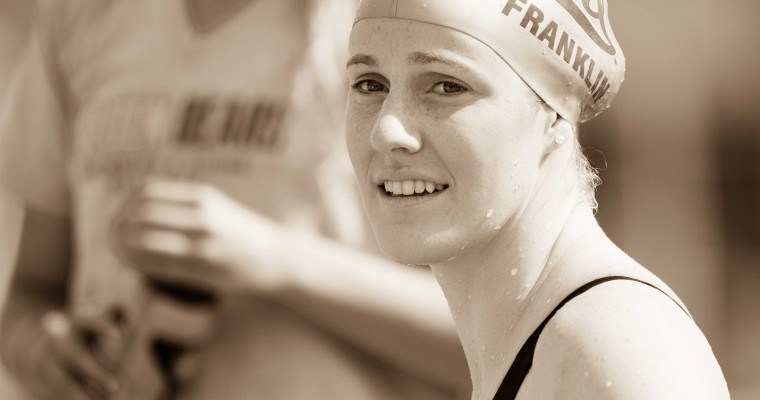 The stars will be out in Los Angeles, with Missy Franklin, Nathan Adrian, and Natalie Coughlin among the headliners for the 2014 LA Invitational Archive photo via Mike Lewis/Ola Vista Photography

Carmel Swim Club’s Shackell dropped nearly three tenths off her personal best time to qualify third into the final at the Summer Championships in Greensboro.

After the excitement of last weekend’s Bulldog Grand Slam meet in Georgia, it’s time for the West Coast’s elite swimmers to get in one final tune-up before the 2014 U.S. National Championships in early August with the Los Angeles Invitational, hosted by the Trojan Swim Club.

Adding in a little flare and flavor will be a group of Australian Nationals who will have a significant role in determining the podiums here; it’s effectively Australia’s best team that isn’t in Manchester, England for final Commonwealth Games preparations. Those names include:

The stars of the American lineup in list form:

In terms of depth, there are few meets in the country this year outside of Grand Prixs and National Championships that can match what the LA Invite will provide. What’s more, it will be a fantastic showcase of the brand-new Uytengsu Aquatic Center, which most of the country hasn’t yet seen on a significant stage.

Is she going? On her instagram she said she was sick..

Missy said she wasn’t feeling well. She had a picture with chicken noodle soup saying thanks to Kristen Verdeveld for being the best roommate when I’m sick.

🙁
Hopefully she will be there.
She needs to swim backstroke before US nationals.

I think she’ll be fine. She’s swam enough backstroke in her life that she won’t forget how to do it.

with all the exprience she allready has at a high level ( + all the medals of great wins + Us team experience ) , she will be fine . Few weeks left before Nationals , and at Cal , i beleive they know how to prepare big meets pretty well .

Women’s 100 free. Missy (if she’s ok) vs Coughlin vs Kukla vs Geer vs Neal vs Weitzeil vs Hardy
Men’s 100 free. Adrian vs himself. But also Ervin and Lobintsev. I’ll also keep an eye on Messerschmidt for the future.
Women’s 100 back. Missy (if she’s ok) vs Pelton vs Bootsma
I don’t still understand why, again, Bootsma, who is a backstroker, swims the 200 fly, and why, again, Stewart who is a butterflyer, swims the 200 back.
Women’s 200 IM. Leverenz vs Li vs DiRado vs Eastin vs Pelton. We’ll see if Miss Pelton continues to improve her breaststroke….or not.
Men’s breaststroke. Cordes vs Kitajima!
Men’s 100 fly. Shields vs himself.

i’m a diehard Pelton fan. but it appears she needs to decide if she’s serious about the IM. during the NCAA season it felt clear she really only cared about backstroke.

I dream she works breaststroke 24/7 all year but unfortunately, it doesn’t seem to happen. 😥
It’s too bad because she has 3 other very strong strokes.
For a few years now I write that her future is the 200 IM.

Bootsma and Stewart are well aware of what their best international events are, but they have to balance that against what their college teams need from them so they swim off events too.

Pelton has a better balance. Cal needs her in the 200 IM, but she still gets to swim 200 back and 200 free, which along with 100 back are her best international events.

Speaking of showdowns, how about that France vs Germany World Cup quarterfinal? Agree there are alot of very good swimmers and matchups in the women’s and men’s 100 free. Don’t forget Messerschmidt’s Cal team-mate Stubblefield.

Let’s see what Shields can put on before August ! He will probably be in the battle for second place behind Michael at Nationals .