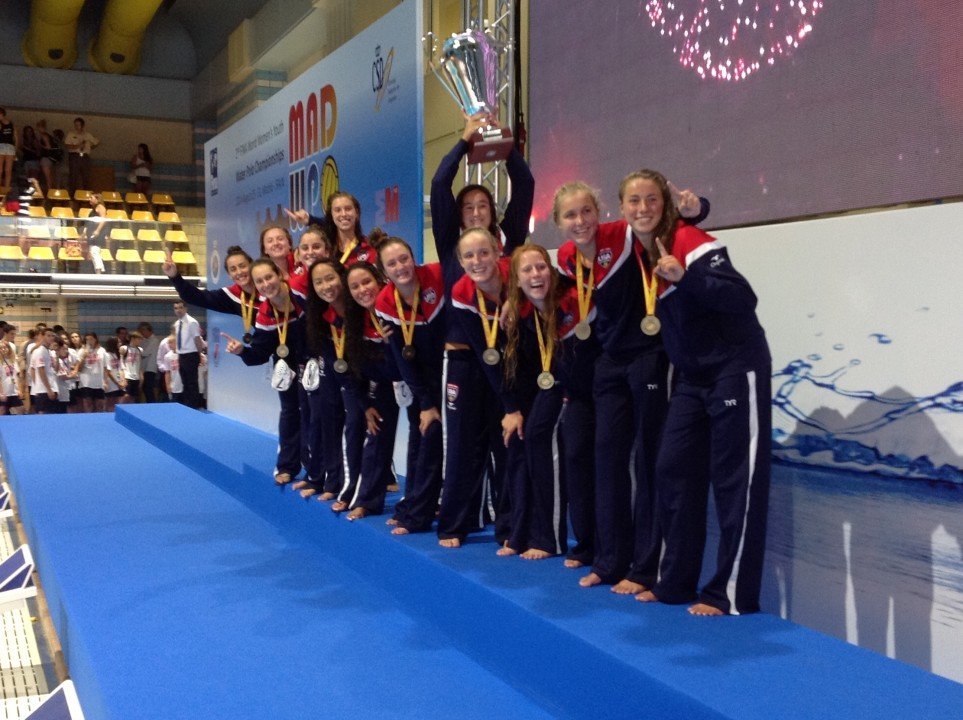 The gold medal caps an undefeated week for Team USA. Aria Fischer scored four goals to lead the offense while Carlee Kapana was named the top goalkeeper of the tournament.

The USA Youth Women’s National Team won their first ever FINA Youth World Championship title following a 5-4 win over Canada. The gold medal caps an undefeated week for Team USA. Aria Fischer scored four goals to lead the offense while Carlee Kapana was named the top goalkeeper of the tournament. Every match from the tournament was webcast and is available on-demand. To see the complete streaming playlist featuring action from each day of competition click here, the list is available on the right side of the screen. To visit the official tournament website, click here. For complete USA results and recaps, click here.

Team USA got off to a great start in the first period opening up a 2-0 lead after the first eight minutes thanks to two goals from Aria Fischer. Canada struck first in the second period to draw within one at 2-1 but Makenzie Fischer answered with a goal for a 3-1 lead. Canada managed one more goal in the second period and the United States held a 3-2 lead at halftime. Aria Fischer scored her third goal to open play in the third but Canada responded with a goal later in the period to leave the United States still ahead just one goal at 4-3 going to the fourth. Canada tied the game in the fourth on a goal from Kelly Matthews but Team USA went back to Aria Fischer who delivered her fourth and final goal to take a 5-4 lead. From there the USA defense did the job and kept Canada off the board on the way to the victory.

Both teams struggled on the power play with Team USA going 1/8 and Canada going 1/5. Neither team attempted a penalty shot. The United States went 6-0 during the FINA Youth World Championship earning victories over Hungary, South Africa, Germany, the Netherlands, Greece and Canada. The gold medal marks the second major championship of the summer for the Women’s Youth National Team as they earned gold at the UANA Junior Pan American Championship this past July in Riverside, CA. This was just the second ever FINA Youth World Championship, the USA Women took fourth place at the first edition back in December of 2012 in Perth, Australia.