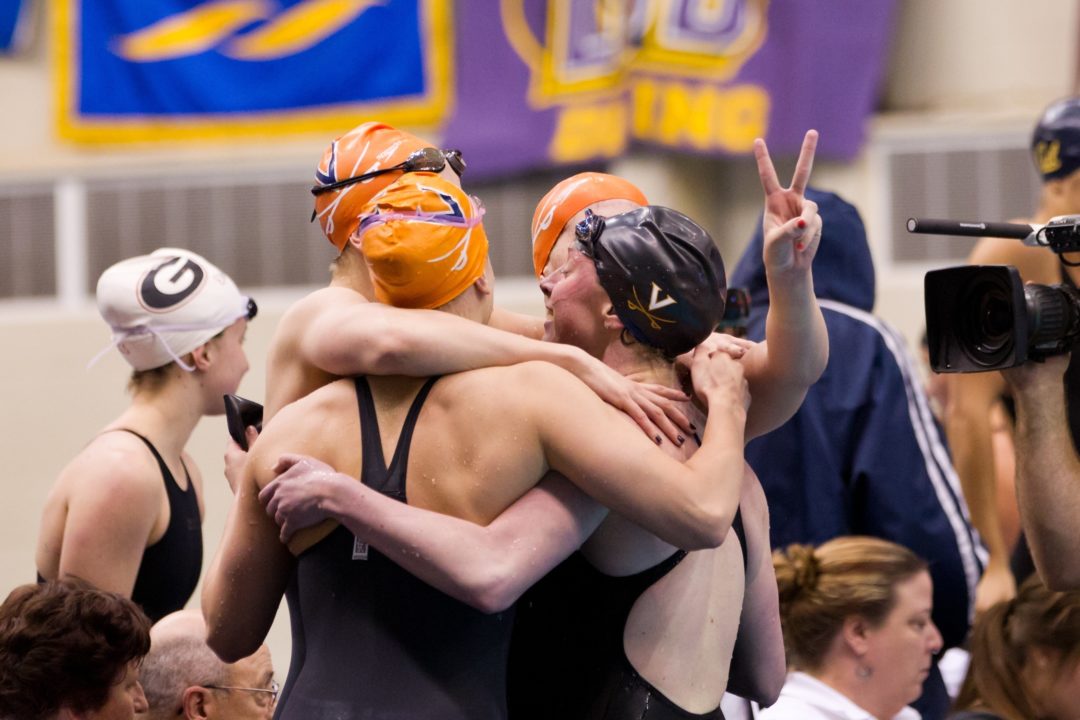 The meet, which will be UVa’s first under first-year head coach Augie Busch, will be contested in 25 meters, as opposed to the 25 yards that will be seen in the rest of the Cavaliers’ meets this season. Live results will be available and linked through VirginiaSports.com. Current photo via Tim Binning/TheSwimPictures.com

The Virginia men’s and women’s swimming and diving programs open the 2013-14 season Friday afternoon (Oct. 25) at Navy in Annapolis, Md. The Cavalier women will also face Yale in addition to the Mids in a double-dual meet. Start time for the meet is 3 p.m.

Due to security restrictions in place, only vehicles with a Department of Defense sticker on them will be allowed to drive onto the grounds of the U.S. Naval Academy. All visitors are required to either park downtown and walk in through the Visitors Center and its security checkpoint at Gate One (located at the corner of King George St. and Randall St. in downtown Annapolis; for GPS purposes use 52 King George St., Annapolis, MD 21402), or else park at Navy-Marine Corps Memorial Stadium ($5 per vehicle) and ride the free shuttle bus to and from The Yard.

The meet, which will be UVa’s first under first-year head coach Augie Busch, will be contested in 25 meters, as opposed to the 25 yards that will be seen in the rest of the Cavaliers’ meets this season. Live results will be available and linked through VirginiaSports.com.

In last year’s meeting with Navy, Virginia posted the top marks in all 32 events contested. On the women’s side, the Cavaliers finished at least 1-2-3-4 in 11 events, while the men had at least the top three finishers in six events.

Navy opened the season last weekend at UMBC, with the men defeating the Retrievers, 154.5-145.5, while the women were victorius, 163-137. Yale’s women had a scrimmage last weekend at Connecticut.

Up next, the Cavaliers will host Penn State, Texas and West Virginia in a quad meet at the Aquatic and Fitness CenterNov. 8-9. The two swimming sessions will begin Nov. 8 at 6 p.m. and Nov. 9 at 10 a.m., while all of the diving will start at2 p.m. on Nov. 8.

This release was provided to SwimSwam courtesy of Virginia Swimming and Diving.

though source (UVA twitter feed) warns that scores have not been corrected to remove exhibition swims, needless to say, UVA won over both Navy (M&W) and Yale (W).