Virginia Moving to One Day, Prelims-Finals for State Championship 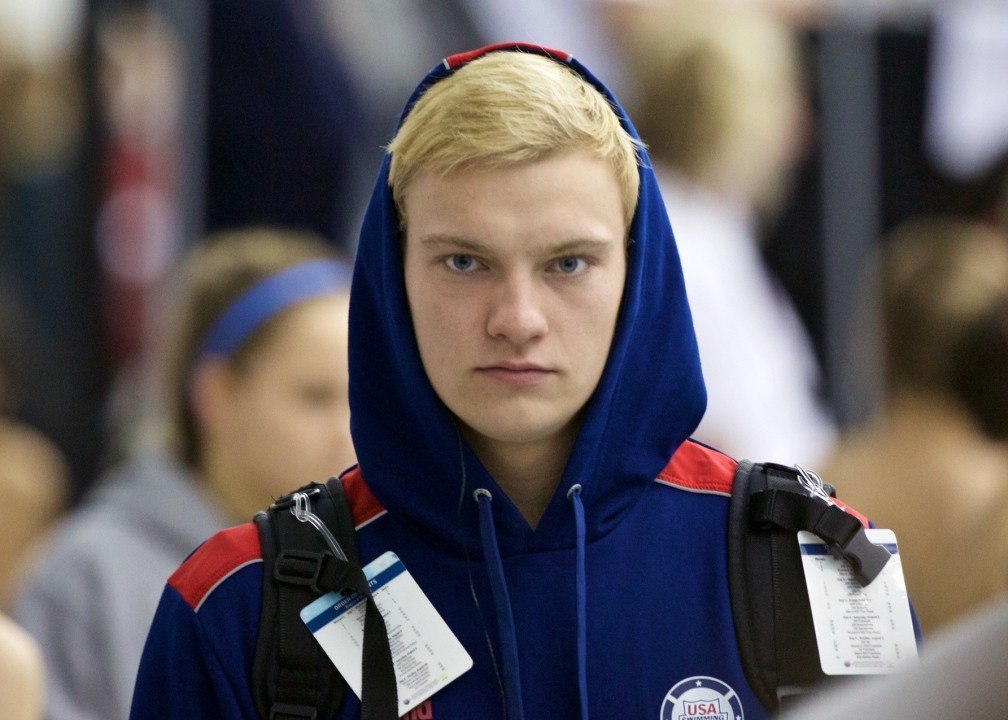 Andrew Seliskar, who swims in Virginia 5A Classification, is one of the many athletes who will have to adapt to a new format on one month's notice. Archive photo via Rafael Domeyko, rafaeldomeyko.com

The Virginia High School League is moving to a same-day prelims/finals format for its 2015 High School State Championship meets, Bryan Flaherty of Reach for the Wall reports.

This is the latest in a run of changes by the governing body for most of Virginia’s high school athletics that has been met with displeasure from the local swimming community. Beginning in the 2013-2014 season, Virginia started recognizing 6 state champions in most sports, though swimming only has 5 across 6 classes (the two smallest classes are combined). That almost doubled the number of state championships awarded, and in some swimming classes resulted in events at the state meet that couldn’t even fill all of their lanes.

Some of the state qualification rules have been changed, with 10 swimmers from each region in each classification advancing to the state meet, meaning that the issue of empty lanes should be resolved.

According to RFTW, the moves are all involving attempts by the league to reduce the cost burdens upon teams for participation in state championships while still “preserving the quality of the event.”

Flaherty quotes Shawn Knight, VHSL’s assistant director in charge of swimming and diving, as saying that this was the solution to reduce those cost burdens while still maintaining a prelims-finals format, which Knight says was very important to coaches they spoke to.

The new dates for the meets:

Flaherty captured the reactions of several coaches around the state, including those upset by both the change in general as well as specifically changing the format 30 days out.. Click here to read those.

It is so sad that someone can place in the state meet without even having a state qualifying time. Standards use to be higher.

It would nice if they have coaches a heads up as soon as they make this kind of decision. It definitely feels like swimming is being pushed to the side (even more) as unimportant.

The meet announcement was posted on Thursday night, 1/23. It was most likely pushed out a little quicker due to Bryan’s article on RFTW referenced above.

It’s also quite clear that this will not be a cost saving measure as there will still be a need for a 2-night hotel stay for any traveling teams since warm-ups are at 7AM and finals are slated to end at 9PM. Either that or there is nowhere for the teams to go between prelims in finals having checked out of their hotel rooms that morning.

I wouldn’t say that they are dampening the meet at all. With all new reclassification/structure within a league, there is going to be a feeling out period to find out what works best for the new structure. The notification of a last minute change is in poor form by the VHSL, but it shouldn’t make the quality of the meets any worse.

I agree that the VHSL should listen to the coaches who are offering to help out. Maybe have a town hall session where thoughts/ideas can be shared to figure out the right path forward. If coaches are willing to help then they should be allowed to.

I agree with you that the reclassification could have been a good thing for competition, however, they have not taken advantage of any of it. Last year the time standards were still the same for 5A and 6A. On top of that they kept the 6 automatic qualifiers from Regions to States when they cut the Regions down from 3 to 2. So there were only 12 automatic qualifiers from both regions. Not one single event at last year’s 5A State Championships had a full 16 swimmers, yet they still ran a prelims/finals format even though we requested to go timed finals if they would not allow more qualifiers so as not to make teams go down for three days… Read more »

Is this confirmed? It would be nice if they informed the coaches as soon as they made this type of decision.

With quite a few other coaches we put together a fully fleshed-out proposal last Spring after we were told that there could be no changes made close to the meet. There was never any response given to that email which had 25 coaches from 5A undersigned. There is a clear sign that swimming is merely a pain for VHSL and they would rather not have to administrate it. The problem is there are plenty of coaches that would gladly do all of the leg work.

I still have not been told who the “interested parties” and decision makers are that are used after many different ways of asking that same question to Shawn Knight. It really is a shame… Read more »

With the 4A meet held on Thursday and many teams having to travel 4-6 hours because of location of pool there is no cost savings of having on same day for most teams. Travel down Wednesday and come home on Friday because meets ends around 8pm. VHSL needs to analyze where schools are at in relation to pool before they make changes. In addition, some of these kids are missing 3 days of school versus 2 days like it was in past.

Last year’s combined 2A/3A meet was a nightmare. Also: prelims and finals took place the same day. Combining the prelims sessions made sense to fill the lanes, and that worked out great. Combining the finals session meant FOUR heats of each event (Consols and Championship finals for each 2A and 3A). The finals session lasted literally as long as prelims (about 5 hours). I, for one, am grateful that they at least separated each division into it’s own meet!

I bet Richmond hotel owners are happy that they collected all those 2-night, prepaid hotel room charges – what a windfall!!

Moving the program in line with most other championship formats. Finally.