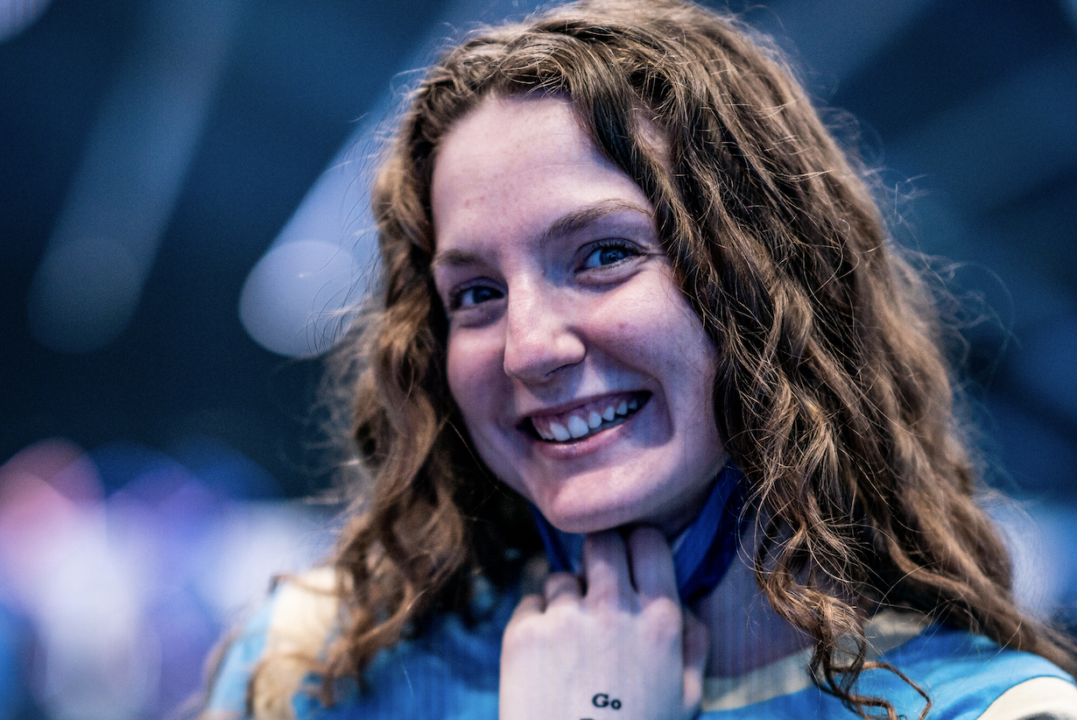 Veronica Burchill won the 2020 SEC title in the 200 free as a senior. As she prepares to graduate from Georgia, she has begun training at Tennessee. Archive photo via Mine Kasapoglu

Pro swimmer Veronica Burchill is joining the professional training group based out of the University of Tennessee.

The female-heavy group includes another newcomer Ali DeLoof, who joined the group earlier this year, as well as Molly Hannis, Erika Brown, and Maddy Banic, who are all former varsity Volunteers.

Burchill says that as she prepares to graduate from Georgia and with the ‘crazy year’ that it’s been, she felt like now was a good time to make a change.

“I have a great friendship with Erica Brown, Ali DeLoof and the other girls in the group,” Burchill said. “I thought it would be a great opportunity to train with the Tennessee coaching staff and this incredible group of ladies. Tennessee is also closer to my family in Indiana but it still allows me to be within driving distance of my sister Sammie, a senior at UGA.”

Knoxville, Tennessee and Athens, Georgia are about 4 hours apart by car.

“It was not easy for me to leave Athens as the coaching staff and swimmers mean the world to me, but for my own growth as a person and swimmer, this was the right thing for me to do and I’m really excited to be here,” Burchill continued.

She started training in Knoxville on Monday, November 30.

For now, Burchill says that her plan is to continue training past the upcoming Olympic Trials and Olympic Games and swimming professionally.

“My experience with the ISL this season and my love for the sport continues to keep me excited about swimming and I know I have more left to accomplish.”

Burchill arrived at Georgia from the famed Carmel, Indiana high school program where she was a 15-time state champion. As a freshman, she finished 13th individually in the 100 fly and scored All-America honors as part of all of Georgia’s free relays.

She continued to build her career from there, earning 20 total All-America citations in her Georgia career. As a senior in 2020, she was the SEC Champion in the 200 free, though the NCAA Championships that season were ultimately canceled because of the oncoming coronavirus pandemic.

She swam in the 2020 ISL season for the champion Cali Condors, where she earned individual prize money of $100 just once, but likely added another $30,000 or so in team bonuses. While she didn’t participate in the final, she did race in her team’s other 5 meets and scored 10.75 “MVP” points throughout the season. That ranked her 270th in the league among 309 swimmers who participated in the season.

Burchill was a member of the USA Swimming National Junior Team in 2015 and 2016.

Sometimes a change is what is best!

GA LSC thanks you for serving as the Interim Business Manager. Good luck in the fresh air of TN!

This is great to see! Coach Kredich and the Tennessee staff seem to be creating a pretty elite training environment between the college athletes and the professional swimmers

How many Gold medals do they have in the Bank?

Matt Kredich has coached 3 American Record holders in butterfly events. He coached Christine Magnuson, though I guess she won *only* 2 Olympic silver medals. What a hack. Jack Bauerle and Matt Kredich are both great coaches. I don’t think this decision should take away from either of them. To pretend like “Jack Bauerle’s swimmers have won more Olympic gold medals than Matt Kredich’s therefore everyone from Tennessee should train with Jack Bauerle” is an oversimplification. Food for thought: Jack Bauerle’s first Olympic gold medalist (or any color medalist) at Georgia was Sheila Taormina in 1996 on the 800 free relay. That was after his 17th season as Georgia head coach. Kredich is in his 16th season as Tennessee head… Read more »

You’re right. I was using the Georgia Olympians page, which looks like it has an error.

And she didn’t train at Georgia in 1996. She went back to her home club coach in Michigan to train!

swim with your friends in nice enviroment and good coaches, I think she used those as more of reason than medals.