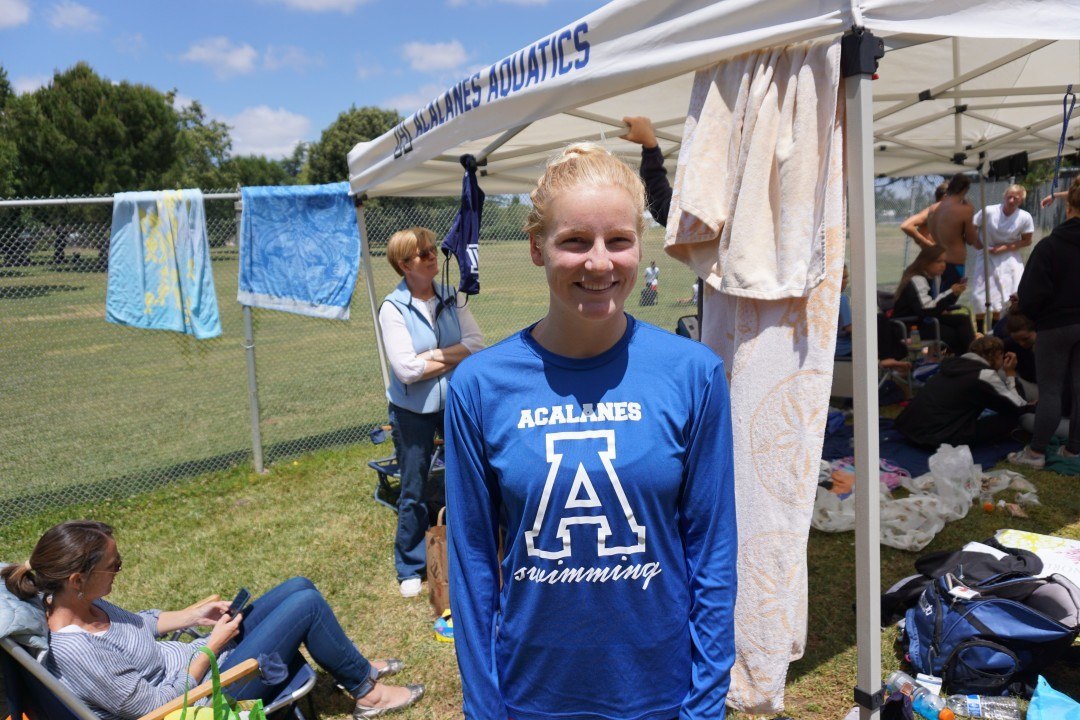 The California High School North Coast Section preliminaries are in the record books, but with the exception of a few events, very little appears to be settled.  With State Championship qualifying swims on the line tomorrow, exciting tight races looks like it will be the theme for tomorrow’s finals.

In the women’s 100 butterfly, Brittany Usinger (Sr., Accalanes, Harvard)  pulled away from the field, where she posted not only the fastest first 50 (24.35), but she also came back with the fastest last 50 too (28.23), finishing in a very quick 52.58.  The legendary list of names in this century that have held the NCS 100 butterfly now reads like this: Natalie Coughlin (2000), Amanda Sims (2005), Celina Li (2012), and now Brittany Usinger atop them all.  Harvard looks pretty smart with this recruit.

Maxime Rooney (Jr., Granada, Verbal to Florida) wasted very little time going about his 2015 assault on the NCS record book.  In the very first men’s individual event, Rooney posted a 1:34.58, breaking his old NCS record of 1:35.69.  Rooney was out in a very quick 44.92, finishing nearly four seconds ahead of the next qualifier Eric Vanbrocklin (Sr. Norhgate, UCSB).

Leading off the 400 Free Relay, Rooney split a 44.10, breaking the old NCS record of 44.22 which was held by both Sven Cambell and Jackson Miller.

On both the women’s and men’s side of this race, the defending team champions San Ramon Valley and Northgate quickly went about the business of defending their team titles.  The women of San Ramon Valley posted a top qualifying time of 1:44.07, well ahead of 2nd place qualifier Las Lomas (1:45.86).  Meanwhile the men of Northgate swam a very quick 1:30.70, only .18 off of the current NCS record.  De La Salle, finished second with Dom Dalpiaz in an early indication of more great swims to come, anchored in a really nice 20.09.

Tomorrow’s final in the women’s 200 free is a must see.  Today, six women all broke 1:50.  Defending champion Cali Rauker (Jr. Marin Catholic) was first in the clubhouse in 1:48.14.  She is less than a tenth ahead of last year’s runner up Brittany Usinger (1:48.22).  Last year’s third place finisher, Moriah Simonds (Jr. Granada), in the first of two really nice prelim swims qualified third in 1:49.10.  This one could be a photo finish tomorrow.

On the men’s side, it took a 1:53 to qualify for tomorrow’s championship final.  Jake Rollo (Jr., SRV) goes in as top seed tomorrow with a 1:51.01, but he is just the first of five guys who posted 1:51’s.  Daniel Comforti (Sr. Heritage, ASU) and Emillio DeSoma (Jr. Redwood) are the second and 3rd qualifiers.   This is another must watch race.  Literally any of 8 guys could win this one.  Four guys, including Rollo, have faster lifetime bests, the ever dangerous Carson Sand (Sr. Castro Valley, Cal) is lurking in 5th, and the word in the stands was that 8th qualifier Cole Stevens suffered an allergic reaction to a bee sting last night, so look for him to be in the hunt tomorrow too.

There were only two people who qualified first in two events today.  Mary Ashby (Sr., Campolindo, Columbia) is one of them (some guy named Rooney is the other), qualifying first in the 50 with a really nice 23.13, that was a great swim all the way around, strong in all phases.  Not far behind, Athenian sophomore Emma Cottrill qualified second with a 23.24.  Iris Brand still has a chance to become a four time NCS repeat champion in this race, but she will have her work cut out for her.  She qualified 8th with a 23.85.

On the men’s side, defending champion Grant Watson (Jr. College Prep) has thrown down with a 48.03, separating himself from the field a bit.  Watson’s teammate, Arjun Sharma (Sr., College Prep, Northwestern), and Mason Tittle (Sr., Northgate, UCSB) swam side by side and stroke for stroke in their prelim heat, swimming 48.67 and 48.75 respectively.  The NCS record in this 47.88.  Watson is a veteran  who almost always swims faster in the finals.  Sharma and Tittle are competitors that don’t like to lose.  The NCS record could be under duress tomorrow.

Only two tenths of a second separate the top 3 in the women’s 100 free.  In what could be a preview of more to come in te Ivy League for the next four years.  Columbia bound Mary Ashby (Sr., Campolindo)  qualified first, Cali Raukar (Jr., Marin Catholic) qualifies second, but finds herself sandwiched by another future Ivy Leaguer, Brown bound Maddie Salesky (Sr., Marin Academy).

On the men’s side, Maxime Rooney took control of his heat right away with a 4:24.76, but one gets the feeling he has more in the tank.  Eric Vanbrocklin also ran away from his heat, posting a 4:28.02.  Amador Valley freshman Chris Jhong was a nice surprise third place qualifier dropping 12 seconds off his seed time (3:35.28).  Look for some more racing in this one tomorrow.

All  200 Free Relays will be the Wild West tomorrow.

Samantha Coloma (Jr. Carondelet) and Gianna Garcia (Jr., SRV) will once again battle it out in the 100 back, qualifying first and second, 54.7 and 55.03, respectively.

In the prelims Marie-Claire (MC) Schillinger (Sr., Miramonte, Rice) and Riley Scott (Sr. Petaluma, USC) also swam stroke for stroke, will Schillinger winning the heat in 1:01.75 to Scott’s 1:01.86.  These two lead the deepest field of the meet.  Everybody in this championship final is an Automatic All American.  Look for another battle tomorrow.

On the men’s side, Carson Sand is the top seed (54.74) followed by Daniel Comforti, Hank Poppe and Stanley Wu who all posted 55’s.

As they opened the meet, the women of San Ramon Valley and the men of Northgate, closed the prelims with the top seeds in the 400 Free relays.  The women of SRV have a date with the women of Carondelet as only .27 separates them (3:27.93 to 3:28.20).

As for the men of Northgate, perhaps they still have a date with destiny.  They posted a 3:01.4 today, nearly 5 seconds ahead of the next best team.  The question for them is still, can they break 3:00?  It should be an exciting finish to the meet.

Unsolicited Advice to All of Tomorrow’s Finalists.

After each championship final, it’s an NCS tradition to hand each finalist a flower along with their medal.  To all of you receiving flowers, know this: You earn big points with your parents when you come into the stands and give your flower to them.  Your parents will be proud, and you’ll hear several ooh’s and aah’s from the other parents nearby.   Enjoy the moment.  There are so precious few of these high school championship meets.

This year’s championship finals will be held at the Concord Community Pool in Concord, California.  Racing begins tomorrow at 10:30 AM.

Unlike CIF-SS, I remark that these North Coast kids don’t have the same luxury of one full day of rest between prelims and finals. On the other hand they can’t complain too much either because in Florida for example, kids have prelims and finals on the same day. 🙂

Only the Division I swimmers in CIF-SS have a full days rest….the other divisions do not.

You can watch the finals here if you pay.
http://www.nfhsnetwork.com/events/cifncs/46483295b5