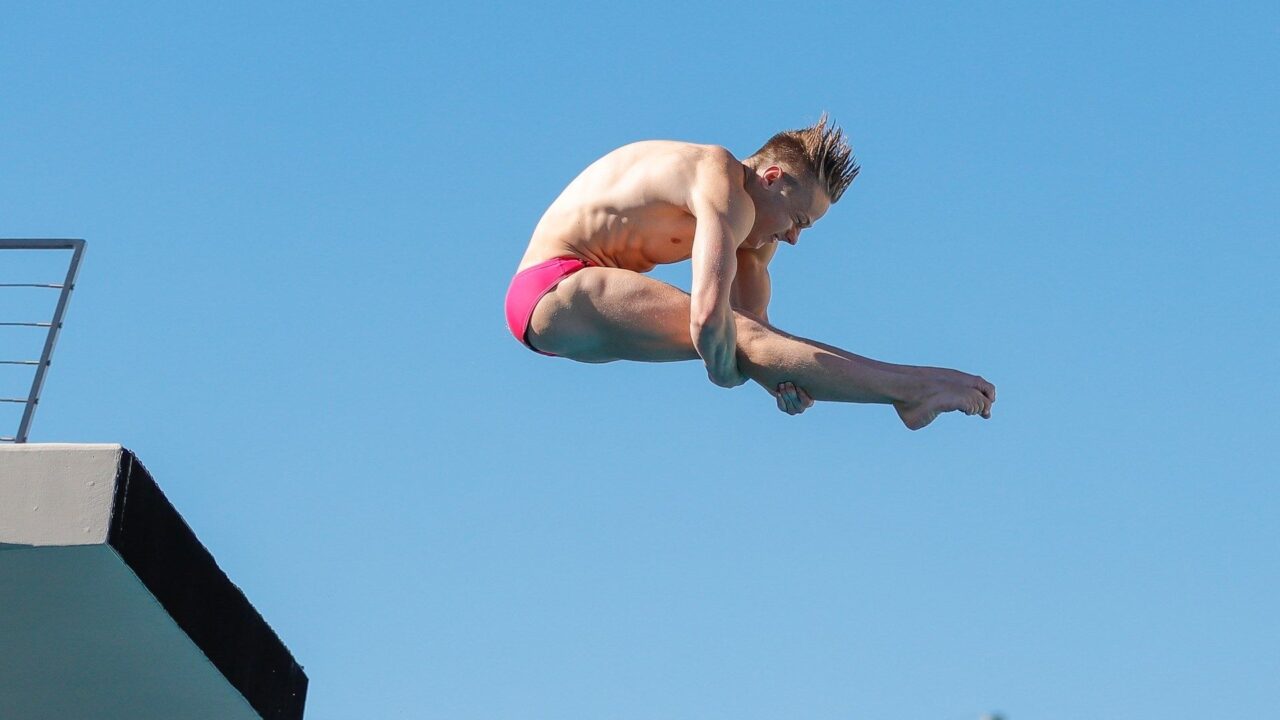 The USC diving squad wrapped up their final event of the fall on Sunday, Nov. 13, claiming seven out of eight events during the three-day Trojan Diving Invitational at the Uytengsu Aquatics Center.

USC diver Nike Agunbiade highlighted the Women of Troy’s efforts on 3-meter, finishing second with 592.80 points. Junior Allison Ward was third on the springboard competition with 555.80 points. Sophomore Grace Lee was sixth with 534.05.

Agunbiade, a platform All-American, won the event at the Trojan Invite with 618.30 points. Finishing second for Troy was Grace Lee with 456.25.

USC also won both of the newly introduced team events on Saturday afternoon.

MEN’S PLATFORM / WOMEN’S 1-METER
The Women of Troy recorded a 1-2 finish on 1-meter to wrap up the final day of action at the Trojan Diving Invitational as Lina Sculti captured the event with 608.15 points. Shortly behind her was sophomore Grace Lee who wrapped up the afternoon with 569.55.

Newcomer Laurent Gosselin-Paradis closed out the weekend with a win on platform, leading a 1-2 Trojan finish in the event as he earned 832.65 points on tower. Finishing second was the 2022 Pac-12 platform champion George Korovin who garnered 728.60 points.

Freshman Eden Cheng, senior Hannah Butler, and sophomore Zoe Jespersgaard all punched their tickets to Zones in 1-meter after finishing 3-4-5 in the 1M Championship at the Trojan Diving Invitational on Sunday afternoon at USC’s Uytengsu Aquatics Center.

Cheng was the Bruins’ top finisher on Sunday, taking third-place with a combined score of 556.65. She ended up fewer than three points behind the runner-up, USC’s Grace Lee (569.55).

Cheng finished prelims in third place (275.20), and maintained that position with a season-best 281.45 in the finals session.

Jespersgaard was the lone diver to break the 600-point mark, edging out USC’s Nike Agunbiade (592.80). Agunbiade was the only other diver to finish within 50 points of Jespersgaard.

UCLA ultimately received top-10 finishes from all three of its entries, as senior Hannah Butler (539.95) was fifth and sophomore Maya Salvitti (477.20) was ninth in a 17-diver field. Other schools competing included UNLV, Fresno State, Pepperdine, and California.

The victory marked Jespersgaard’s first as a collegiate diver in an invitational format, as she was runner-up in 3M at last year’s Trojan Diving Invite.

Jespersgaard led practically the entire way, overtaking Agunbiade on her third dive of prelims and finishing with the top score of the opening session at 297.45. She briefly ceded the lead, by less than half a point, after the second round of finals, but came back to score over 58 points on her next two dives – a 107C and 205B – to take the lead for good. Those dives marked her two highest-scoring rounds of the entire competition.

Jespersgaard and Butler have both officially qualified for this season’s NCAA Zone E Diving Championships, having cleared the 280-point threshold for 3-meter.

The Bruins return to action at the Trojan Diving Invitational on Sunday, with all three competing in the 1-meter championship.