USA Swimming reports that they sold $73,200 in tickets to the first 2 stops of the 2019 Pro Swim Series... Stock photo via Anne Lepesant 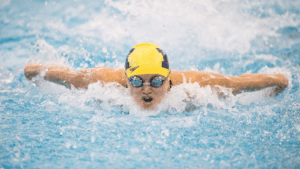 USA Swimming reports that they sold $73,200 in tickets to the first 2 stops of the 2019 Pro Swim Series in Knoxville, Tennessee, and Des Moines, Iowa. The information comes as the organization has reshaped the bidding process for its flagship in-season elite circuit, requiring cities to bid for the rights to host.

In the past, USA Swimming paid hosts a $20,000 management fee in order to entice them to host the series. This year, however, cities bid for the rights to host a meet in the 5-stop series. The result was 5 new stops that haven’t hosted recently, and, on average, smaller venues for the series, and a lot of public concerns over whether fans would show up to watch smaller fields in cities that are often more remote than traditional hosts like Austin, Indianapolis, or Columbus.

Ticket prices have also, generally, increased significantly for this year’s series. For example, at the stop in April in Richmond, Virginia, an all-session ticket cost $149, while in 2018 all-session tickets for most of the meets could be had for $60-or-less.

Ticket sales lagged for the series’ opening stop in Knoxville, Tennessee at the Alan Jones Aquatic Center, which has a total seating capacity of 1,284 seats. USA Swimming reports that 1,200 out of 2,100 available tickets for that event were sold, which comes to about 57% and represents $23,900 in revenue.

After that, though, attendances turned around quickly: in Des Moines, Iowa in February, 2,200 out of 2,300 available tickets (96%) of tickets were sold, generating $49,300 in revenue. That facility lists 1,500 seats as its capacity. At the time of reporting during the organization’s April board meeting, the final numbers for the Richmond stop in April were not known yet, but all tickets did sell out. With a maximum seating capacity of only 700 spectators, Richmond was also much smaller than the prior 2 stops.

USA Swimming says that, in cooperation with their ticket-selling agency Vendini, they are focusing more on attendance and ticket sales this year. They view the overall run so far as “achievement” of USA Swimming’s goal of 80% sales for the series, as the 3 meets together represent an 84% ticket sales in spite of the early lag in Knoxville.

A report by CEO Tim Hinchey cites 3 factors as an explanation for the smaller crowds in Knoxville:

A standard stop on the Pro Swim Series awards $103,500 in prize money to participating athletes: $3,000 per event, plus a bonus $1,500 to the swimmer who has the fastest prelims swim in an Olympic event (based on FINA points).

So what about broadcast and ad/sponsor revenue? It looks like this thing will never cash flow without some TV money.

I can’t definitively say “most,” but a lot of the revenue is tied up in broader television and sponsorship packages, and the USA Swimming financial statements don’t line-item the piece allocated to the PSS out.

Changing the bid process and meet locations in the middle of the quad was a mistake. Pro Series may have had good spectator attendance, but athlete participation has been terrible. I don’t believe that one meet has filled finals heats in every event. These meets should be in the best facilities, attracting the best athletes from around the world to race our best athletes.Unfortunately, this year’s lineup is not in the best interest of our swimmers. Glad USA Swimming is trying to make a buck, but sacrificing the quality of the Pro Series in the process is not acceptable. The point of these meets is to prepare our best swimmers (Pro swimmers and up and coming talent) for national and… Read more »

Bloomington had the highest athlete count of all the meets this year, somewhere around 420. It certainly helped that IU, Louisville, Cal, ASU & Stanford all showed up in strength. Good spectator crowds for the all the sessions also, even though IU had finished their school year the week before. I had a great time. Thought it was a great venue, especially with all the history there. Seeing all the banners on the wall is something. Of course, the “Cody & Lilly Show” didn’t hurt the local attendance either.
I heard that Clovis had been having problems getting entries, which is why they adjusted the entry cut times.

A trip to Clovis just won’t cut it for todays instragram crowd. I remember going to a meet held there at the high school back in the day and we considered Clovis a hick farm town suburb of Fresno. It was like a trip to hell in our minds. Maybe its better now I don’t know.

Making money should be a goal of the series but not necessarily the most important one. I don’t trust the sports bureaucrats to provide us with honest information about this kind of stuff that is why I am curious about additional revenue sources for the meets. My impression is that the whole thing is still being heavily subsidized by USA swimming. With the costs given in the article I don’t think ticket revenue is ever going to be enough. I do think they should change their bid award criteria to favor better location/airports and the larger facilities. Most important would be to listen to the coaches and swimmers for their feedback. I know on the west coast going east you… Read more »