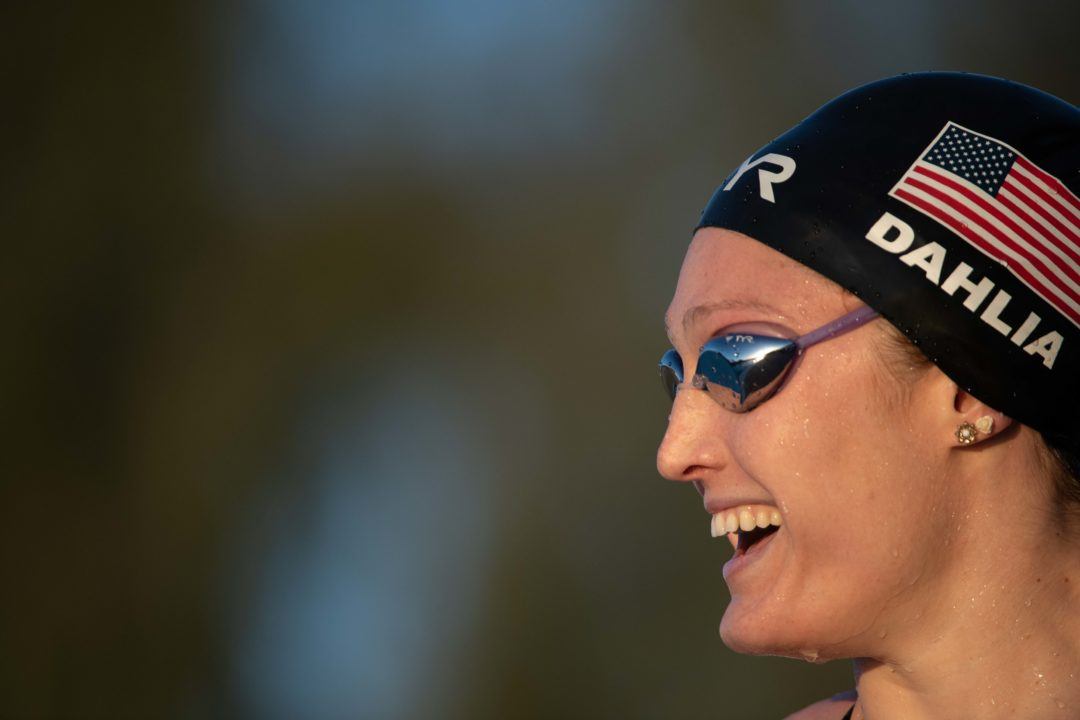 Kelsi Worrell won the 100 fly at the 2015 Pan American Games. Her 3 medals there were her first senior international podium finishes before going on to Olympic gold in 2016. Archive photo via Mike Lewis/Ola Vista Photography

Like the American team for the 2019 World Championships in South Korea, USA Swimming will select its roster for the 2019 Pan American Games in Lima, Peru on the basis of 2018 results.

The event will be held from July 26th through August 11th, with pool swimming running over 5 days on the back-end of the meet (August 6th-10th) and open water swimming is held on August 9th and 10th (10km race only).

USA Swimming is treating this as its subordinate senior international meet of 2019. Specifically, athletes who qualify for the 2019 World Championships or the 2019 World University Games won’t be eligible for nomination to the Pan American Games, and barring a written exemption from USA Swimming they won’t be able to decline one of the other two meets to swim in the Pan American Games.

The one codified exception to that are athletes who are only selected for Worlds and the World University Games in non-Olympic individual events or relay events.

To select the team, USA Swimming will take the results of Nationals, remove all swimmers that qualified for Worlds or WUGs in an individual, Olympic event, and use that as the ‘event ranking.’ They will focus on place, not time, for that ranking, meaning that all swimmers in “A” Finals at Nationals will automatically rank ahead of swimmers in “B” Finals, and subsequently “C” Finals. Prelims times and relay leadoffs will not be used for these rankings.

Swimmers must also meet the time standard set by the Pan American Games hosts, UANA, with the U.S. eligible to send 2 swimmers in an event if both have A standards, or 1 swimmer in events where they don’t both have A standards. Note that USA Swimming is accepting UANA’s definition for those A standards, in that so long as the swim was done between March 1, 2018 and April 30, 2019, it counts, even if that A standard was not done at Nationals. However, swimmers with “A” times in other events, or swimmers in lower finals who swim “A” times when a competitor from a higher final doesn’t, don’t get to jump the priority order just for the sake of giving the U.S. a 2nd competitor in an event.

The Pan American Games only include races in Olympic events.

Update: meet orgnanizers have confirmed the schedule, and there will be no men’s 800 free or women’s 1500 free.

If the team goes beyond 18 swimmers before filling all of the 4 priorities above and ties need to be broken, swimmers will be ranked based on a Modified World Ranking. That is to say, the World Ranking from January 1, 2017 and July 20, 2018 will be compiled, times from finals at Nationals will be inserted, and the highest-ranked athlete will be chosen.

If there is a tie that needs to be broken between swimmers in the same event (i.e. for the 2nd Available Swimmer slot in a certain race), a swim-off will be used.

The announcement of the team will take place “on or around” October 31st.

I love that there are so many opportunities to be on a major team for next year. I think as a nation we will have some of the most incredible depth we’ve had in a while. Youngins looking ready to make their mark earlier in the quad than usual it seems as well.

Are the Men not swimming the 800 at Pan Ams and vise versa for the women?

“The Pan American Games only include races in Olympic events. Current qualifying documents don’t include qualifying times for the men’s 800 free or women’s 1500 free, the newest Olympic events, though we’ve reached out to UANA to ask if they’ll be included or not.”

skipped right to the comments… didn’t ya?

So for instance in the case of someone like Katie Ledecky – who is a college student still but no longer a member of her college team since she turned pro – would she qualify for WUG still? Hypothetical since she would likely NOT attend, but an important distinction nonetheless IMHO.

I believe so. As long as enrolled in college courses. I think even Michael A would technically be eligible as well?

Must have been enrolled in post-secondary education in the prior year. Has nothing to do with the NCAA or NCAA eligibility, post-secondary can look a lot of ways in a lot of different parts of the world, including in the U.S. Technical school, for example, would apply, as would community college courses, an online degree program, a study abroad program, etc.

The rules get a lot more specific than that, but they tend to err on the side of inclusion.