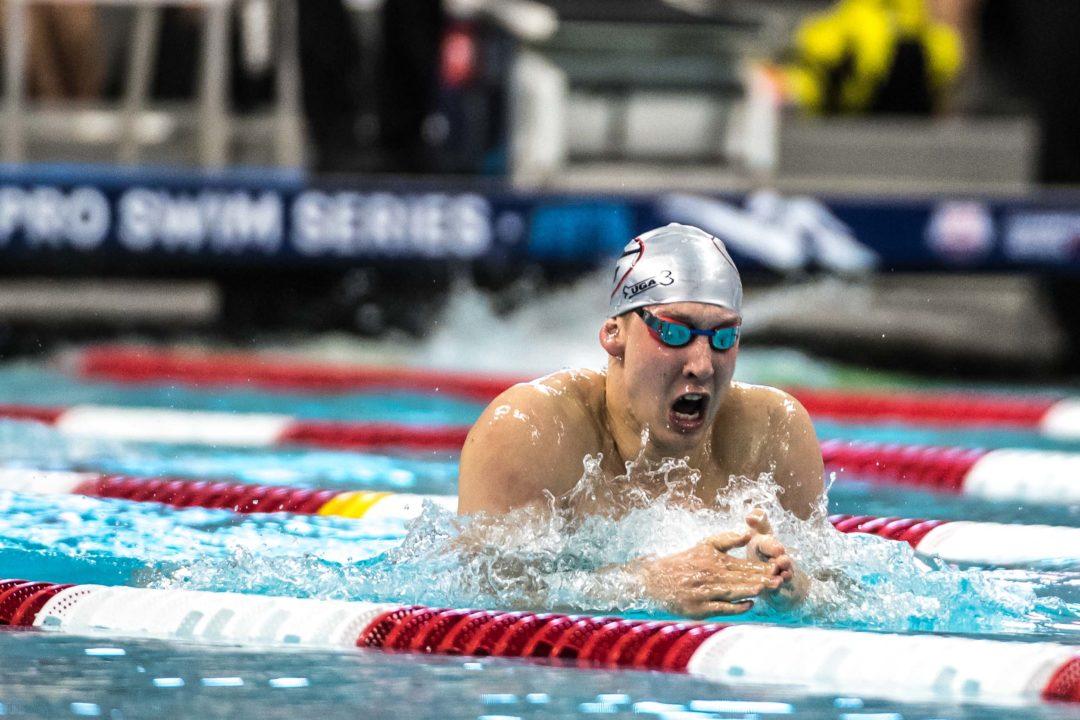 USA Swimming has released the selection criteria for their upcoming major competitions, including the 2019 FINA World Championships set to be held in Gwangju, South Korea next July.

The World Championship selection will follow the same format as it did four years ago, as swimmers will vie for spots on both the Pan Pac team and Worlds team this summer. At US Nationals in July, swimmers will compete to qualify for Pan Pacs, and then results from both of those meets will be used in determining the qualifiers for the World Championships the following year.

The qualification criteria, broken down simply, is below:

The only real difference for the athletes will be that two men will be able to qualify in the 800 free, and two women in the 1500, after they were added as Olympic events last summer. For the stroke 50s, the winner at Nationals will earn a berth on the World’s team, and the second entry in Gwangju will be offered to the fastest swimmer in the corresponding 100m event using combined results from Nats and Pan Pacs. The maximum roster size per gender is 26.

Qualification is predicated on all swimmers achieving the FINA ‘A’ standard times, which won’t be a problem in a country as deep as the US. Relay only members are only required to have hit the ‘B’ standard. It’s also worth noting that prelim times or relay lead-offs from either meet won’t count towards selection. Only ‘A’ final swims from Nationals and both ‘A’ and ‘B’ finals swims from Pan Pacs will be used.

You can check out the document outlining the full qualifying procedures here.

Of course you can’t have nats which qualify you for pan pacs and worlds? Wtf?

Here was a great opportunity for National Team director Mintenko to change something and it just stays the same.

I really hate that they use times from the ‘B’ final at Pan Pacs. Last time, this led to Plummer making the WC team over Ryan Murphy because Plummer cruised prelims and then went faster than Murphy in the ‘B’ final than Murphy did in the ‘A’ final.

Seriously, not making the team really ruined Murphy’s confidence and he has never really recovered. He was a rising star and now look at him… what a waste.

Sarcasm’s tough on the internet, huh?

yes full sarcasm is rolling on the board right now

He did make the team, he just didn’t get to swim the 100 back since Plummer went faster in the ‘B’ final. Show me where in our competitions here in the US that we award someone for something that they did in the ‘B’ final of a swim meet? If we don’t do it at any other level, why do it at the highest level? It’s really easy to say that this didn’t have any effect on Murphy’s continued success now after the fact, but I am willing to bet that Murphy still doesn’t like this rule.

What a strange, strange thing to say about Murphy who is, a beast.

He did go faster. He went faster in prelims and made the ‘A’ final.

2015 was bad because we were in a transition period. Aging Lochte and no Phelps. The next wave too young to contribute. It won’t be the same this time around.

I don’t think it will be as bad as 2015, but that class of 2020 list shows there is some serious rising talent.

Walsh and Smith (to take the obvious examples) could be serious medal hopes as 18 year olds in Tokyo, but have missed out on 2019 World Champs altogether because they weren’t quite quick enough as 16 year olds, giving them no chance to gain experience of a big international, senior meet before Tokyo.

Also, as a swim fan, I want to see the world’s best swimmers at that time get in a pool and race each other at every opportunity they can, not virtually race each other from thousands of miles away like Phelps and… Read more »

Considering Smith got experience at 2017 Worlds, I think she’ll be alright, but I agree with your sentiment.

But, yeah, if she’s looking to multi event in Tokyo and didn’t qualify or only qualified for the 200 back this year, it would make the Olympics a learning curve when it doesn’t need to be.

By all means, lets repeat the mistake that led to one of team U.S.As worst performances ever at worlds. Of course we have more superstars on the team than last tine so it will probably be more like 2011 but still.

Or let’s repeat the success of one of team USA’s best performances ever at the Olympics the following year.

thats what they will do

Such a selection procedure will definitely hurt young American prodigies who need just one more season to compete at world class level. Therefore that will most likely eliminate the opportunity for Claire Tuggle to shine at her first WC at age of 15 (like Ledecky in London). And she has to postpone her major international meet for one more year to be Olympic Games (that would be indeed like Katie Ledecky 😀 )

To be fair, the 2015 WC’s had a bit of dead weight (older swimmers that hadn’t been dropping PR’s in the last several years). The great thing about USA swimming at the moment is all the young talent in the middle of their rise to greatness. I have confidence in USA swimming to take care of business in 2018 and 2019.

they will do great at least until 2020 and beyond

Young enough talent to still shine in 2024, and no possibility of USA underperforming in 2028. We’ve waited too long.

Why???????? 2015 World selection was horrible! So many promising people missed out because they peaked a year too late!

I’m assuming this is due to the timing of Worlds in 2019? With it being mid-July, you’d have to have the qualifying meet mid-June?

Because the focus was on the 2016 Olympics and not 2015 Worlds, which was pretty successful. There’s a lot to be said for giving athletes 3+ weeks of more training the year before the Olympics rather than tapering twice the summer before 2020.

I don’t know if it worth it and if it was an intention but such a selection procedure increases the importance of PamPac meet that otherwise can turn out to be pretty boring and ignored by some leading swimmers.

Nothing appears to have been announced yet.

at the end of the summer i guess

Would really like to see Dressel swim there and most likely break some short course WRs.

I’d rather see him go on the World Cup circuit and earn money for doing that.

Why not both? So many others are doing both. I’d prefer Worlds though. I doubt he really needs the money, and I reckon training instead of competing in the fall will be what Troy prefers.

Why would you doubt he needs the money? I’m sure he had a full ride at Florida but he’s got expenses like anyone else. I’m certain he’ll get sponsors but swimmers don’t bring in a significant amount of money until before, or just after the olympics. Might as well race and earn some money to pay for the rest of the year.