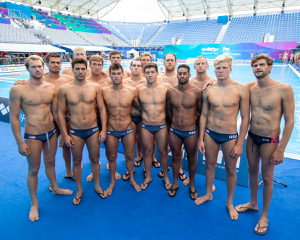 The USA Water Polo Men's and Women's National Teams have arrived in Peru for the 2019 Pan American Games with competition starting on Sunday. Current photo via “Rafael/Domeyko Photography”

LIMA, Peru – The USA Water Polo Men’s and Women’s National Teams have arrived in Peru for the 2019 Pan American Games. After a short visit home following the FINA World Championships the squads touched down in Lima yesterday with competition starting on Sunday. See below for full rosters and schedules.

The USA Women open with Puerto Rico on Sunday at 11am local time/9am pacific while the USA Men start with Cuba at 3pm local time/1pm pacific. ESPN is the official broadcaster of the 2019 Pan American Games with a variety of content streaming on ESPN3. A streaming schedule of events can be accessed by clicking here. Water Polo broadcast details will be shared as soon as they are available. Follow @USAWP on Twitter, Instagram and Facebook for live updates from Lima.

Athletes injured in the nightclub floor collapse following the World Championships in Gwangju, South Korea all arrived back in the United States on Saturday (women) and Sunday (men) with Kaleigh Gilchrist (Newport Beach, CA/USC/NYAC) returning home on Tuesday afternoon following surgery on her left leg in a Gwangju hospital. Gilchrist was not originally named to the Pan American Games roster and a timetable for her return to the pool has not yet been determined. Other athletes suffering injuries in Korea have all traveled with the team to Lima ahead of the competition including Paige Hauschild (stitches), Johnny Hooper (stitches), and Ben Hallock (scrapes).

The champions of both the men’s and women’s competition will earn a spot at the 2020 Olympic Games. The USA Men’s National Team will look to earn their 13th Pan American Games title and with it a berth to Tokyo. The USA Women have their sights set on their fifth straight Pan American Games title. On the heels of their record third straight FINA World Championship, the USA Women have already qualified for Tokyo by virtue of claiming gold at the FINA World League Super Final earlier this year. Should Team USA claim gold in Peru the team that takes silver will earn the Olympic berth.