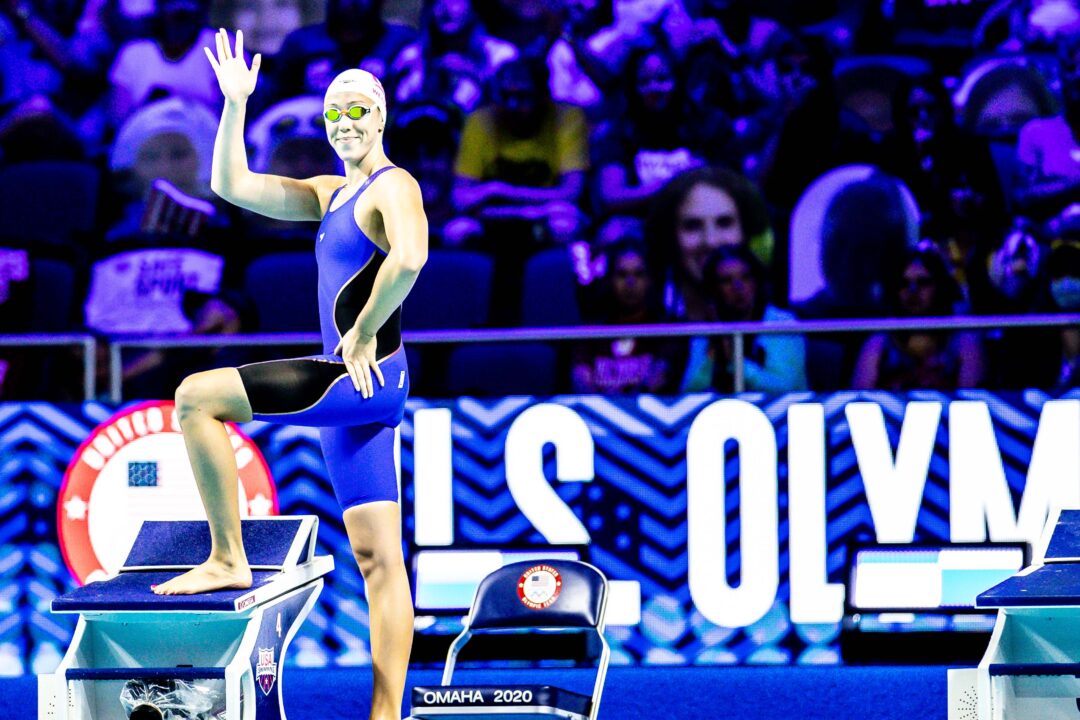 US Olympian Abbey Weitzeil and NCAA Champion Michael Jensen have announced their engagement after dating for more than 4 years. Archive photo via Jack Spitser/Spitser Photography

US Olympian Abbey Weitzeil and NCAA Champion Michael Jensen have announced their engagement.

The couple made the announcement via their Instagram accounts, with Weitzel writing, “A crazy little thing called forever 💍🤍” on her account. Jensen later shared the same photo on his account with the caption, “We’re engaged, love you babe.”

According to an Instagram post shared by Weitzeil, the couple just celebrated their 4 year anniversary in early October.

Jensen and Weitzeil met while the two were both studying and swimming at Cal. Both of them finished out their Cal careers and graduated back in 2020.

During her career at Cal, Weitzeil became one of the most successful sprinters in NCAA history. After  relatively quiet freshman and sophomore years, Weitzeil had a breakout season during the 2018-2019 season, claiming the  2019 swimmer of the meet at the PAC-12 championships en route to winning conference titles in the 50, 100, and 200 freestyle. At that season’s NCAA Championships, Weitzeil posted a blistering 21.02 to win her first NCAA title and break the American record in the event. She also contributed to relay victories in the 400 medley relay, 400 freestyle relay, and 200 freestyle relay for Cal that season. Early during the 2019-2020 season Weitzeil re-broke her American Record in the 50 freestyle, swimming a time of  20.90 to become the first woman under 21 seconds. However, that season the NCAA Championships were canceled due to the pandemic.

Weitzeil has also represented the US internationally on several occasions, including the 2016 and 2021 Olympic Games, along with the 2015, 2017, and  2019 Long Course World Championships. Across her two Olympic appearances, Weitzeil has won a total of 4 medals, including one gold in the 400 medley relay in 2016, along with 2 silvers, and one bronze.

Jensen is also an NCAA Champion, having contributed to Cal’s 200 freestyle relay victory in 2019. He was also a critical part of Cal’s PAC-12 Championship winning teams in 2018, 2019, and 2020. Over the course of his Cal career, Jensen earned CSCAA All-American status 14-times and was a 10-time PAC-12 relay champion. He has also represented the United States internationally, having swam at the 2019 World University Games, the 2015 Junior World Championships, and the 2018 Short Course World Championships. At the 2018 Short Course World Championships, he took home two gold medals as a prelims member of the 4×50 and 4×100 free relays.

Jensen most recently swam at a dual meet against Stanford in February as a post-grad, almost two years after his last meet with the Cal varsity squad, while Weitzeil most recently raced at the Indianapolis stop of the World Cup, placing 2nd in the 50 free, 3rd in the 100 free, and 3rd in the 50 butterfly.

This is like Lea Loveless (the Olympian) and Erik Maurer (the NCAA 50 yard champion) at Stanford in the 1990s!

Much happiness to the lovebirds!

Those kids are gonna be unstoppable in the water