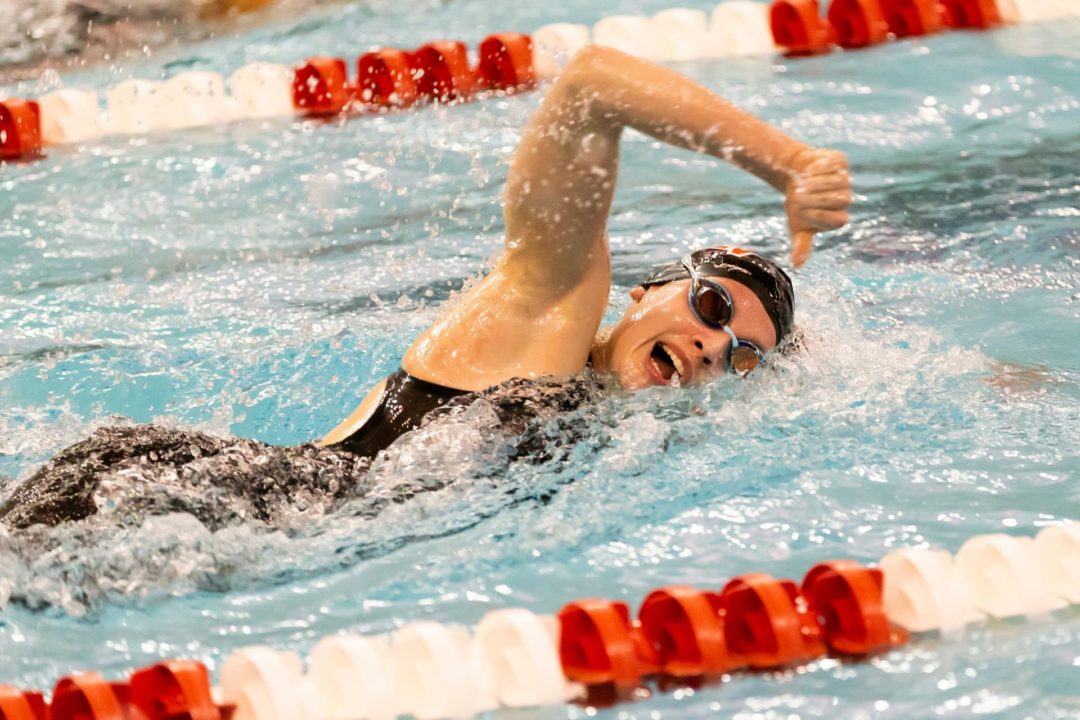 The Rebels took 10 of 12 events en route to a 196-103 victory over the Wolfpack at Lombardi pool. Current photo via UNLV Photo Services

RENO, NEV. (UNLVRebels.com) – The UNLV women’s swimming and diving team picked up its first win over in-state rival UNR in 17 years Saturday, as the Rebels took 10 of 12 events en route to a 196-103 victory over the Wolfpack at Lombardi pool. With the win, the Rebels will earn at least a tie of the three points in the Silver State Series presented by IBEW and Nevada Donor Network in the sport of women’s swimming and diving.

*UNLV opened up its string of first-place finishes in the 200 medley relay, as the Rebels’ ‘A’ squad of senior Kate Afanasyeva, freshman Tosia Iwanowska, junior Kristina Schneider and senior Caitlyn Schreiber combined for win with a time of 1:43.51.
*Juniors Teneka Ash and Filio Raftopoulou (10:42.47) tacked on to the Scarlet and Gray point tally, as they finish in first and second, respectively, in the 1000 free.
*The Rebels dominated the 200 free race, as junior Julia Filippova (1:52.52), senior Lauren Smith (1:54.14) and junior Kristina Schneider (1:56.74) pounded out a 1-2-3 finish.
*In the 100 back, Afanasyeva claimed UNLV’s fourth straight win after securing her first-place finish with a time of 56.06. Touching moments after Afanasyeva, Kacey Kiuchi took second with a time of 57.12 and senior Eva Kim placed fifth to grab additional points for UNLV.
*In the 100 breast Freshman Calysta Bartlett (1:03.96) came within .21 seconds of UNR’s Wiktoria Samula in her second-place finish. Meanwhile, her Rebel freshmen counterparts Iwanowska (1:05.51) and Koopmans rounded out event’s scoring in fourth and fifth, respectively.
*Joining Ash in getting the Rebels back on track in the win column in the 200 fly, juniors Gabby Lizzul (2:06.86), and Carissa Armijo (2:09.43) tagged along in the respective second-place and third-place spots.
*The Scarlet and Gray followed with its third sweep of the day in the 50 free, as Kim (23.63) placed first, Schreiber (23.96) finished second and freshman Malia Fernandez (24.08) took third.
*Stretching UNLV’s momentum into the 100 free with their 1-2-3 sweep, Schneider touched first with her Mountain West season best-matching time of 49.92, Smith (52.94) came in second and Fernandez (53.59) finished third.
*Kiuchi (2:03.17) and Raftopoulou (2:04.76) piled on another 1-2 finish in the 200 back, as the latter picked up her only win of the meet and the former claimed the last of her two second-place finishes on the day.
*Trailing Ash in her third victory in the 500 free, Filippova recorded a second-place finish and Armijo landed in third to top off the Rebels’ event sweeps.
*In the 100 fly, Koopmans tallied her first career victory with a time of 56.05 to lead the way for the Scarlet and Gray. The Rebel newcomer’s victory paved the way for the top-2 sweep, as Afanasyeva (57.16) came in second.
*Bartlett followed suit in the 200 IM with her first individual win wearing a UNLV cap, logging a time of 2:06.39.
*In a wire-to-wire 400 free relay, UNLV’s ‘B’ team (3:29.90) of Smith, Filippova, senior Camryn Wheals and Kim eclipsed the Rebels’ ‘A’ unit comprising Schneider, Afanasyeva, Fernandez and Schreiber to round out the squad’s event wins with a 1-2 finish.
* Junior Montse Moreno posted fourth-place finishes in the 1-meter (277.65) and the 3-meter (299.70) to lead the Rebels in the diving competitions. Freshman Isabella Bassock finished fifth in the 1-meter (202.50) and 3-meter (198.00) dives.

QUOTABLE: “The team really stepped up today. Teneka Ash was a wrecking ball today, winning the 1000/200 Fly/500 in one of the hardest triples to do, especially at altitude. We also had seven different athletes win an event, once again showing our depth. Reno is always a challenging road trip, but the women brought tremendous energy. They prepared well throughout the week and it showed.” -Head coach Ben Loorz

RENO, Nev. – The University of Nevada swim and dive team fell to UNLV in its first dual of the season Saturday, 196-103.

“We swam with a lot of determination today, and I was happy with our attitude and effort. We will get much better and peak for the conference meet,” said head coach Brendon Bray. “On the dive side, I couldn’t be happier with their performance. Hats off to Jian Li and the divers with two, 1-2-3 finishes.”

The Nevada divers claimed first, second and third place in every diving event. Junior Isa Vazquez Lopez led the Pack, claiming first in the 1 and 3-meter with final scores of 322.50 and 368.77.

Nevada’s Josien Wijkhuijs, Wiktoria Samula, Julia Adamczyk and Colette Berkenfield came in second in the 200 medley relay with a time of 1:45.32.

Up next, the Pack is set to face UC-Davis (date TBA) before the Mountain West Championships. Nevada dive travels to the Air Force Diving Invitational on Feb. 5-6.