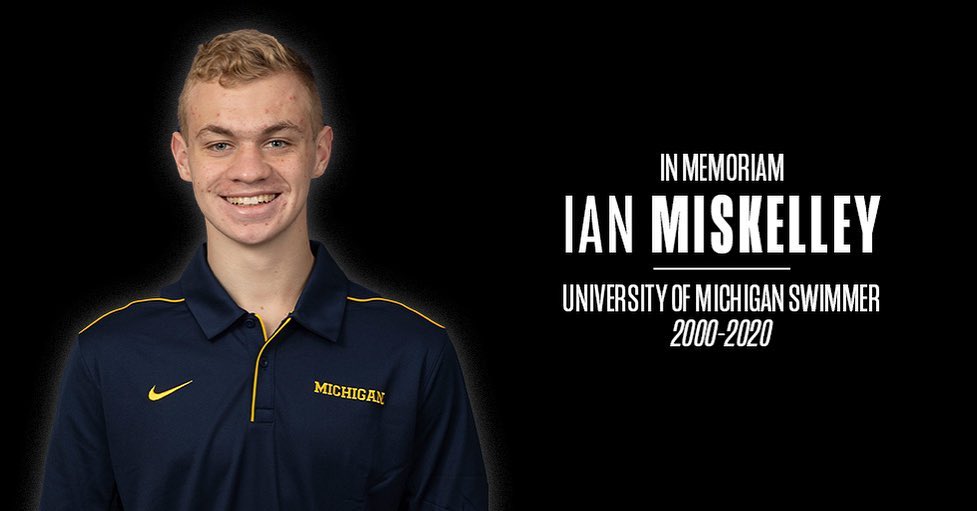 Ian Miskelley, who was beginning his junior season at the University of Michigan, died on Monday. He was 19 years old... Archive photo via Michigan Athletics

University of Michigan swimmer Ian Miskelley died on Monday. He was two weeks shy of his 20th birthday and was scheduled to compete for the Wolverines as a junior during the 2020-2021 season. No cause of death has been reported.

Miskelley was a two-time Academic All-Big Ten selection for the Wolverines and twice won the U-M Athletic Academic Achievement Award.

“This tragic news is utterly devastating to our team. Our condolences go out to the Miskelley family during this incredibly difficult time,” a statement from the University of Michigan reads.

Miskelley is originally a native of Holland, Michigan on the western shore of the state. There he swam for Holland Christian High School and Michigan Lakeshore Aquatics.

A visitation will be held from 3-6 p.m. on Friday at Langeland-Sterenberg Funeral Home in Holland. A second visitation will be held from 9:30-11 a.m. on Saturday at Our Lady of the Lake Catholic Church with a funeral mass to follow. In lieu of flowers, please consider making a donation to the Ian Miskelley Memorial Fund C/O the Holland/Zeeland Community Foundation, 85 E. 8th Street, Suite 110, Holland MI 49423.

Miskelley’s last Instagram post was a photo with the team working out at Michigan Stadium, including the caption “In times like these, where our world is full of uncertainty and unpredictability, it’s important to stick with those around us through thick and thin and support each other through everything each of us face. Here’s to year 3 with the best team out there. #3for3.”

That photo has turned into a virtual memorial for friends and teammates to leave their memories of Miskelley.

In times like these, where our world is full of uncertainty and unpredictability, it’s important to stick with those around us through thick and thin and support each other through everything each of us face. Here’s to year 3 with the best team out there. #3for3

So sad. My son swam against him for years. Very nice kid and great competitor.

We miss you so badly, bud. Tremendous loss to our MLA family.

Many prayers out to the Miskelley family. Have only heard great things about Ian, and I know he will be dearly missed.