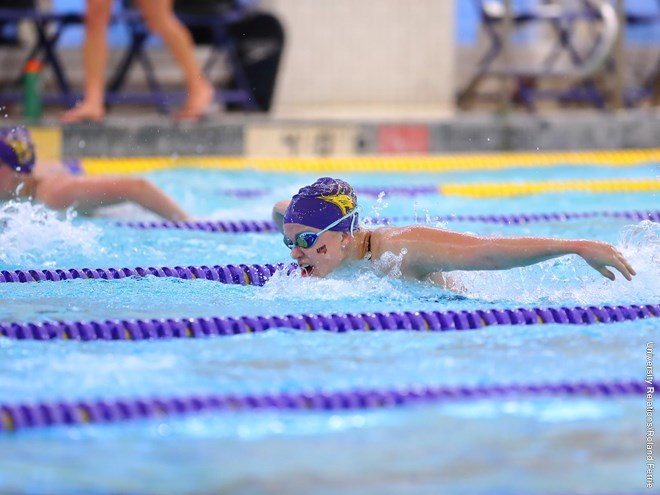 Crystal Florman took first place in the 100 freestyle, timing in at 52.48.

Rachelle Houlette timed in a 2:15.82 in the 200 butterfly for third place. Kelsey Ostrowski followed in fourth place, swimming a 2:16.90.

Alivia Soares timed in a 2:31.21 in the 200 breaststroke, swimming into third place.

Ashleigh Houlette and Lauren Kacmarynski took fifth and sixth in the event, swimming a 25.89 and 25.96 respectively.

In the diving well, Jayden Lovell finished in fourth place on the 1-meter boards, with a dive score of 220.72. Madison Schoppe made her debut as a Panther, diving a 176.47.

The Mavericks fell 157-143 to Northern Iowa, but saw some individual marquee performances.

Clinton won the event and totaled a 1-meter dive score of 272.40 while Taylor finished runner-up and tallied a 267.89 total score. To qualify, an athlete must record a score of 265 or better event. Jacquelyn Gaworski finished third behind her teammates with a score of 254.69.

“I was very happy with many of our performances tonight,” said head coach Todd Samland. “We won some races and had incredible diving. Our diving stole the show tonight with Annika Clinton and Madeline Taylor making Diving Zone Cuts, while Jacquelyn Gaworski was close to getting the cut as well. Hats off to Northern Iowa who came in with some big performances and big relay swims to take the meet.”

In the 3-meter dive, Gaworski and Clinton finished first and second with totals of 233.10 and 226.73, respectively.

Omaha returns to action Monday, Oct. 15 at noon. The team travels to USAF Academy, Colo., to take on Air Force in a dual meet.