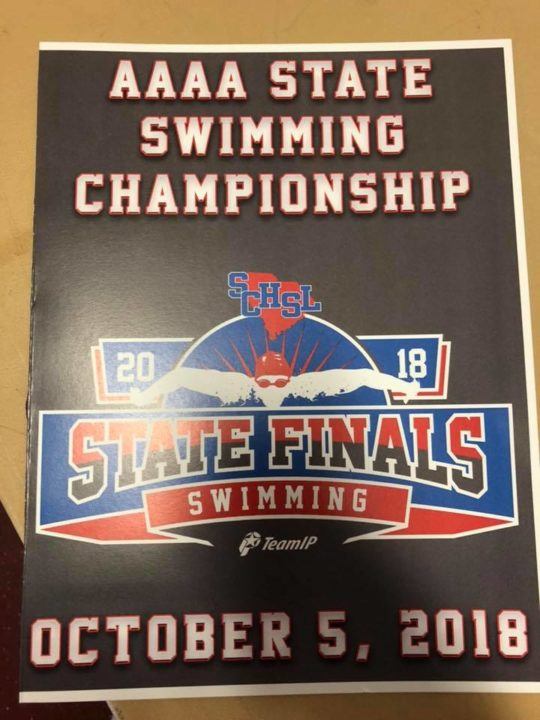 Zach Apple began to close on him down the stretch and employed his patented straight arm technique over the closing meters.

For the second year in a row, Eastside High School swept both the girls’ and boys’ titles for the 2018 South Carolina High School 4A State Swimming Championships on Friday. Both Eastside teams not only won for their second consecutive year, but won also by over 200-point margins.

The first individual event of the meet, the girl’s 200 free, featured a close battle between defending state champion, Eastside’s Riley Parker, and Dreher’s Hayley Mason. However, it was Parker who successfully defended her title at 1:52.17. Mason touched in second at 1:52.31. Parker also won the girls’ 100 free title at a 52.24.

Greenville’s Anna Havens Rice also successfully defended her title in the girls’ 200 IM. Rice touched in at a 2:04.96, over 5 seconds head of runner-up Hilton Head Island’s Meaghan Lyons. Rice was not done yet as she also defended her 100 breast title, touching in at 1:04.67. Lyons once again was second to Rice in the 100 breast, finishing at 1:05.85.

Yet, Mason did not let her runner-up finish stop her. Mason anchored her Dreher 200 free relay to a win at 1:43.05 and defended their title from last year. Taking second in the tight race was Eastside at 1:43.41, Hilton Head Island took third at 1:43.54.

Eastside’s double-winners, Bognar and Parker, were members of the winning 400 free relay that took the championship title for the Eastside girls, winning with a time of 3:36.62.

In the first event on the boys’ side, North Augusta and South Aiken dueled for the 200 medley relay title on the freestyle leg. South Aiken’s Jacob Buck anchored in a 20.75 free split to edge out the North Augusta relay with a winning time of 1:35.55, just 0.51 seconds off the 4A state record set in 2008. In the 200 free relay, South Aiken once again overtook North Augusta by 0.13 seconds, winning with a 1:27.69.

Eastside had a close victory in the boys’ 200 IM, as Dawson Kramer just edged out Myrtle Beach’s Ian Morgan in the back-half to take the title at 1:55.33. Morgan, however, came back later in the meet to win the boys’ 500 free at a 4:39.38. Morgan’s winning time was over 12 seconds faster than his second place time last year.

AC Flora’s Emerson Edwards, committed to Brigham Young University next fall, successfully defended his 100 free title, touching in at 46.73. Following in after Edwards was South Aiken’s Chafin and Buck at 46.97 and 47.39, respectively.

While only having 2 victories in the meet, the Eastside boys’ incredible depth allowed them some leverage heading into the 400 free relay. After taking third in the 500 free and second in the 200 free, Eastside senior Luke Smith anchored his relay to a dominating win to secure their championship title at a 3:14.21.