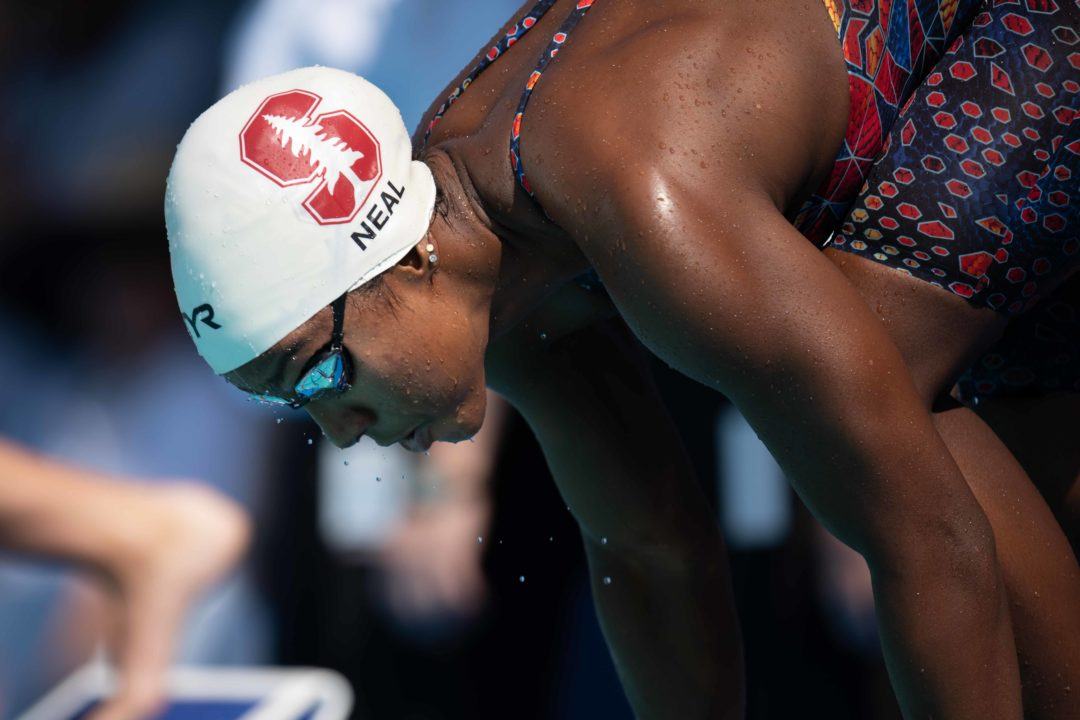 Lia Neal has announced her retirement from competitive swimming: "I'm ready for the next chapter of my life." Archive photo via Mike Lewis/Ola Vista Photography

Neal, 26, represented the United States at both the 2012 and 2016 Olympic Games, winning a bronze in London on the women’s 4×100 freestyle relay and then winning a silver in the same event in Rio.

Neal’s Instagram post was a video of herself being interviewed at the age of 12, saying her goals were to go to the Olympics and “maybe even get a medal there.”

“Thank you, Swimming, for taking this little Blasian girl from Brooklyn with Olympic dreams to places from Guam to Budapest and everywhere in between,” wrote Neal. “More importantly, thank you for allowing me to meet all the amazing people along the way. 12-year-old Lia would have never imagined all the opportunities swimming would offer.

“Every win, loss, breakdown, laugh, celebration, and hour spent staring at a black line over the last 20 years shaped me into the person I am today and for that I’m grateful.”

In addition to representing the U.S. at the last two Olympic Games, Neal has also been on three straight World Championship teams, including winning a bronze medal in 2019 on the 400 free relay.

She most recently competed in Budapest during the 2020 International Swimming League season, appearing in four matches for the league champion Cali Condors. She also competed during the 2019 season for the NY Breakers.

Collegiately, Neal was an eight-time NCAA champion at Stanford University, competing with the Cardinal from 2013-2017, helping the school to its first Women’s NCAA title since 1998 in her senior year.

Neal is of African-American and Chinese-American descent, and has committed to bring more diversity to the sport of swimming. She has been involved with USA Swimming’s ‘Make a Splash’ Initiative, and is currently one of the leaders of “Swimmers For Change”, which aims to provide a platform for the swimming community to raise awareness for the Black Lives Matter movement while working towards combating systemic racism in the U.S.

“Though I won’t be competing anymore, I’ll remain closely involved with the sport in other ways, through @swimmersforchange and serving on the boards of various swim-related organizations,” Neal continued in her Instagram post.

Neal was also apart of an important historical moment in the sport in 2015, when she was on the podium of the women’s 100 freestyle at the NCAA Championships alongside teammate Simone Manuel and the University of Florida’s Natalie Hinds – making the top three finishers all of African-American descent.

“I can’t wait to finally be a spectator of Olympic Trials for the first time in 13 years and cry along with everyone achieving their own dreams. What a special time.”

I wish we, as a swimming community, could give these Olympians who have given so much to swimming, a bigger platform for their retirement announcements. An instagram announcement seems so small for someone of Neal’s stature.

A bigger platform, on SwimSwam at least, is always available. Most prefer to make their announcements this way, via their social media channels.

Saw her compete many times for AGUA when she was in the Metro LSC. Watched her set a NAG record. Amazing athlete. Better person. Best of luck to Lia!

Could AG be one of those various swim-related organizations she mentions serving on their boards?

What a career! I remember watching her swim the 4×100 in London 2012, then her journey at Stanford. She has been an inspiration for many young WOC. We love you, Lia, and we will definitely miss you.

Congrats on a great career. You were a wonderful teammate in relays. And I’m sure that you like Simone have inspired a lot of kids who initially felt that swimming was a sport stranger to them.

Congrats on an impressive career, Lia! I loved watching you race!

Wonder what her major was at Stanford?? Sure she will have no problem getting a job.

Her degree is in Science, Technology and Society. It’s an interdisciplinary degree.

RIP, that sounds like one of the fruity liberal arts degrees. Stanford tho, so she’ll probably still get a job out of it.

You think an Olympic medalist with a Stanford degree that touches numerous areas of high importance in today’s society, a true outspoken leader and someone who broke barriers in a sport historically unrepresented by black athletes is going to have trouble finding a job?

Amazing young woman, wish her the best in her next chapter.

Great career champ! A true inspiration in and out of the water. Look forward to your next chapter