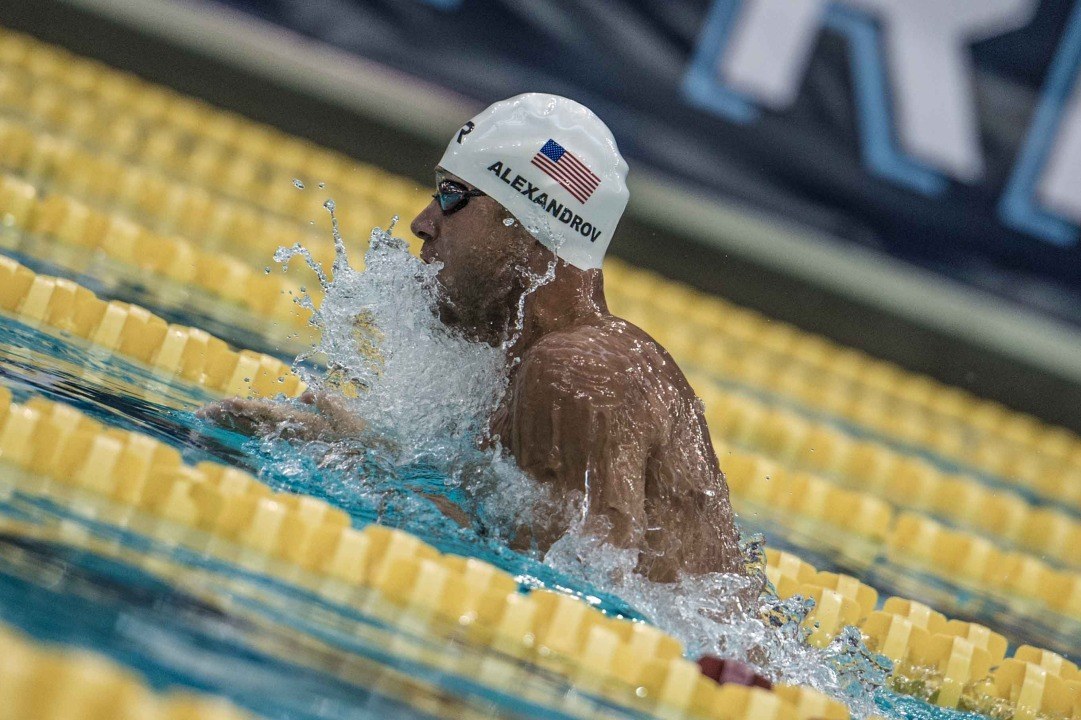 The positive urine sample came from an in-competition test at the Arena Pro Series event in Santa Clara on June 4, 2017. Cocaine is a Specified Substance in the class of Stimulants and prohibited in-competition under the USADA Protocol for Olympic and Paralympic Movement Testing, the United States Olympic Committee National Anti-Doping Policies, and the Federation Internationale De Natation Anti-Doping Rules.

Alexandrov’s one year of ineligibility began on August 24th, the date he returned from retirement. He originally retired shortly after that meet in Santa Clara in June of 2017. He has also been disqualified from all competitive results subsequent to June 4th, the date of his test. That includes forfeiting any medals, points and prizes won.

The 32-year-old swam for Bulgaria at the 2004 and 2008 Olympics, beginning to swim for the U.S. in 2009 where he was a fixture on the National Team. He won a pair of World Championship titles representing the Stars and Stripes, both in the 4×100 medley at SC Worlds in both 2010 and 2012. He also added a pair of medals from the World University Games in 2013 representing the U.S., winning silver in the 100 breast and bronze in the 4×100 medley, and also won a pair of bronze medals in the 100 and 200 breaststroke representing Bulgaria at the 2007 SC European Championships.

Hope It’s not indicative of a bigger problem for him.

Geoff had long retired . Whilst swimming he prefered to use legal alcohol to dull his pain.

Don’t think anybody here said it was acceptable, and I don’t think many people in wider society would class alcohol abuse/use of alcohol to bury emotional pain as acceptable either.

Memorial day partying? Still not good if that is right. Why did it take sooooo loonngg to come out with this news>

Unfortunate
Sucks for him
Can’t really see him bouncing back

Yes, but this sounds more like a recreational drug problem than a doping issue

Wow, I’m shocked. It seems like we always talk about stuff like this yet when it actually happens we’re all taken by surprise.

Doesn’t surprise me. Been a shady character his whole life. Glad it finally caught up to him.

Please elaborate further as to what you mean

A lot of people seem to be agreeing with Alex. Intriguing…

Years ago some people were annoyed that he was allowed to set an American record in the 100y Brest event though he competed internationally for Bulgaria. I wonder if that is the reason for the upvotes on this comment.

Now when I look through his google images it looks like he’s on coke in every one. Know he’s not, but.