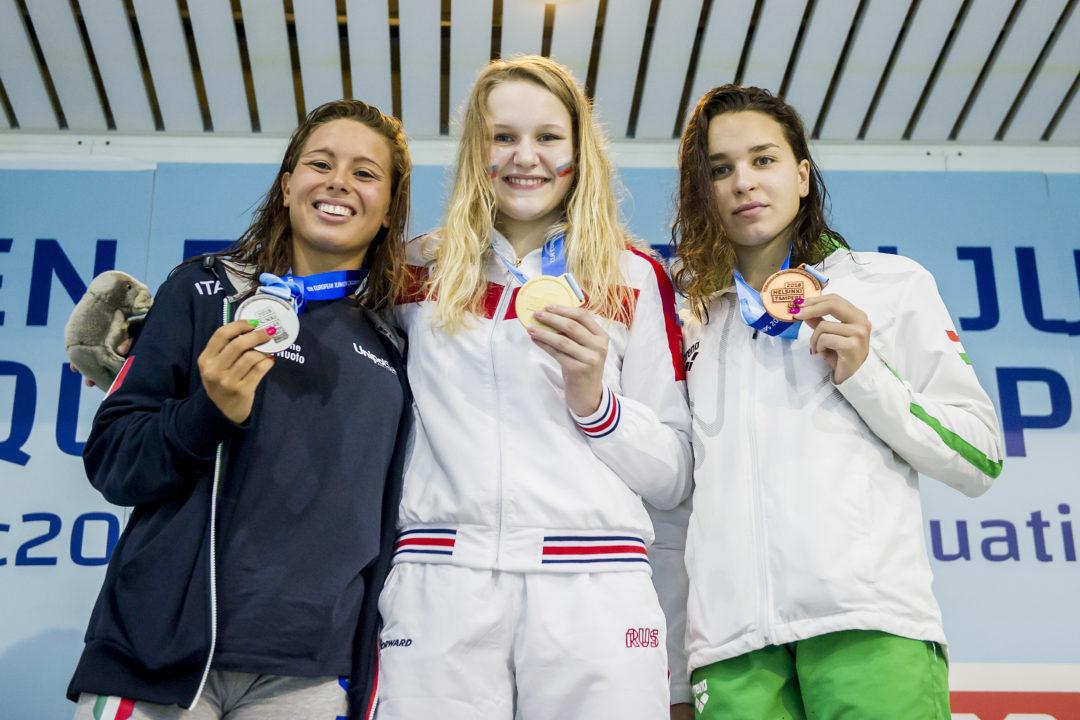 Both Turkey and Russia collected a gold, silver, and bronze medal each on day 1 of European Juniors to lead the day 1 medal table. Archive photo via Andrea Masini/Deepbluemedia/Insidefoto

Upon the conclusion of day 1 of the 2021 European Swimming Championships, there is a tie for 1st, 3rd, 5th, and 7th on the medal table, meaning that all 8 countries represented on the table so far have the exact same ranking as another country.

Tying for 3rd place on the medal table after day 1, Great Britain and Hungary each collected 1 gold medal. Great Britain’s sole victory thus far came from Katie Shanahan in the women’s 400 IM where she hit a 4:42.59 to take gold and beat out Turkey’s Ertan and Russia’s Sorokina. Hungary’s gold medal performance was in the women’s 4×200 freestyle relay where Laura Veres, Bettina Fabian, Reka Nyiradi, and Nikoletta Padar race their way to gold with a combined time of 8:00.95.

Romania and Poland collected their respective silver and bronze medals in the men’s 4×100 freestyle relay. Both teams finished less than a second behind Russia’s winning 3:19.66 as Romania hit a 3:19.93 for second place and Poland was a 3:19.96 for bronze. Notably, David Popovici delivered an opening split of 47.56 on Romania’s relay which was a new world junior record.

The final 2 members of the medal table came in the men’s 400 freestyle final where Bosnia and Herzegovina’s Jovan Lekic picked up silver in a 3:50.79 and Czech Republic’s David Kounty took bronze in a 3:51.06.