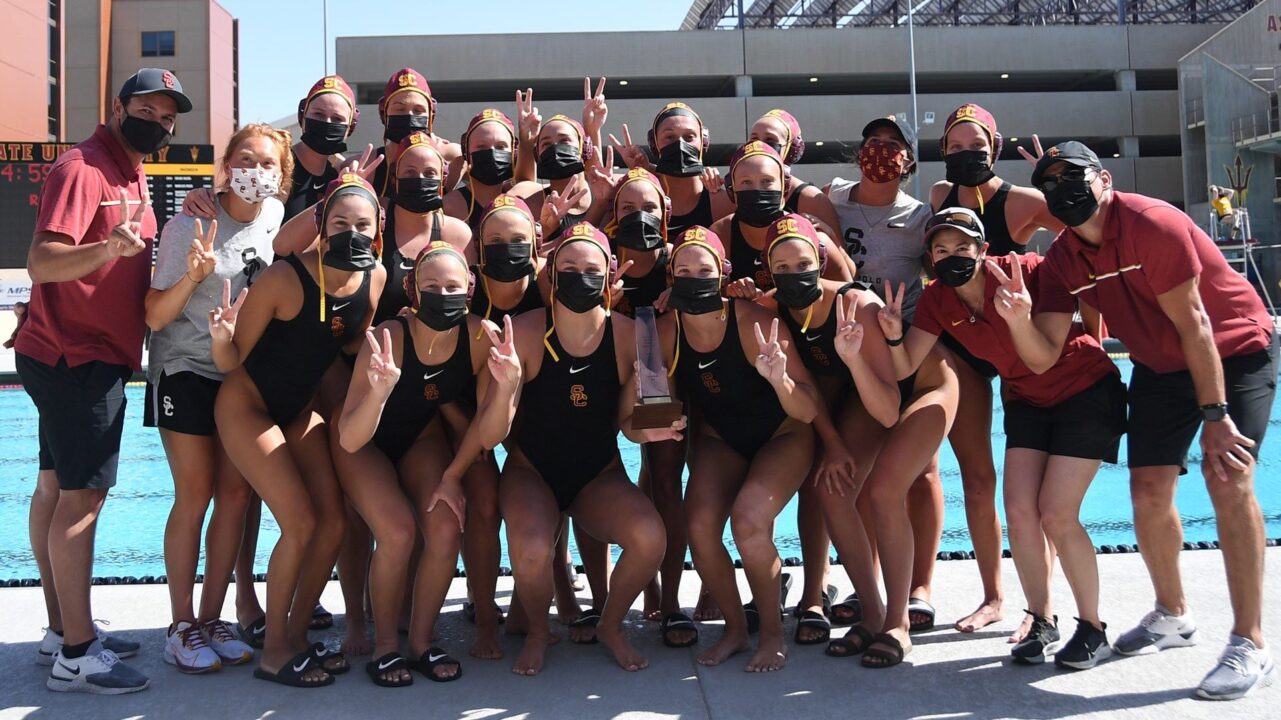 TEMPE, ARIZ. — The top-seeded USC women’s water polo team turned a tight game into a third consecutive MPSF title with a fourth-period surge that stuck a 9-6 victory over No. 3 seed Stanford in the books in today’s MPSF Championship game at Mona Plummer Aquatic Center in Tempe, Ariz. The Cardinal had a slim lead in the first frame, but USC moved ahead in the second and stayed on top the rest of the way. USC’s 2021 MPSF crown follows tourney titles also won in 2018 and 2019, as the 2020 postseason was not played due to the coronavirus pandemic. Now, the top-ranked Trojans have the automatic bid in-hand for the coming NCAA Tournament, into which USC will carry a 19-1 overall record for its 17th straight trip to the tourney.
USC’s path to that automatic NCAA slot started out bumpy, as the Cardinal struck first and would late answer Grace Tehaney’s opener for USC with a late 6-on-5 finish to go up 2-1. USC defense would lock down Stanford for the next 11 minutes, though, while Bayley Weber blasted two goals in the second frame to tug the Trojans into the lead, up 3-2 at halftime on a fine finish from Weber off a feed from Maud Megens. In the third, Megens sizzled in her first to nudge USC ahead 4-2 before Stanford got back its scoring touch after the referee’s whistle gave them a fresh look against USC’s defense. Three minutes later, USC broke through on spring backhand from Mireia Guiral, whose efforts at two-meters were eye-popping today. Up 5-3 on that impressive strike, USC would see Stanford awarded a late 5-meter penalty shot, and the Cardinal converted to bring it back to a one-goal margin entering the fourth.
In the final eight minutes, USC powered up again. Guiral got USC a 5-meter look early, and Megens deposited it to get another two-goal advantage for USC. Stanford pulled a goal back with a finish from the post to make it 6-5, only to see Megens unleash a slingshot strike 12 seconds later to pad back the Trojan lead. A slick 6-on-5 finish from Kelsey McIntosh bumped USC to its largest lead of  the day to get it to 8-5. Stanford would make the most of a 6-on-4 opportunity next to make it 8-6 with 3:52 remaining, but USC stayed in control. After squashing a Stanford power play in the final minute, McIntosh sent in a savvy goal to get USC back some breathing room with a 9-6 lead with 37 seconds to go, and that would hold for the Trojans in their title quest.
Locked in for its 17th consecutive NCAA appearance after having secured its seventh MPSF Tournament title, USC awaits the announcement the final NCAA bracket, which is due to be announced on  Monday (May 3) at 5 p.m. PT on NCAA.com. UCLA is hosting this year’s NCAA Tournament, set for May 14-16 at Spieker Aquatics Center.
2021 MPSF TOURNAMENT
CHAMPIONSHIP GAME
[1] USC 9, [3] Stanford 6
May 2, 2021 | Mona Plummer Aquatic Center (Tempe, Ariz.)
USC    1 – 2 – 2 – 4 = 9
STAN  2 – 0 – 2 – 2  = 6
SCORING:
USC — Maud Megens 3, Bayley Weber 2, Kelsey McIntosh 2, Grace Tehaney, Mireia Guiral.
STAN — Chloe Harbilas 2, Hannah Constandse 2, Sarah Klass, Jewel Roemer.
SAVES: Holly Parker (USC) 10, Emalia Eichelberger (STAN) 12.