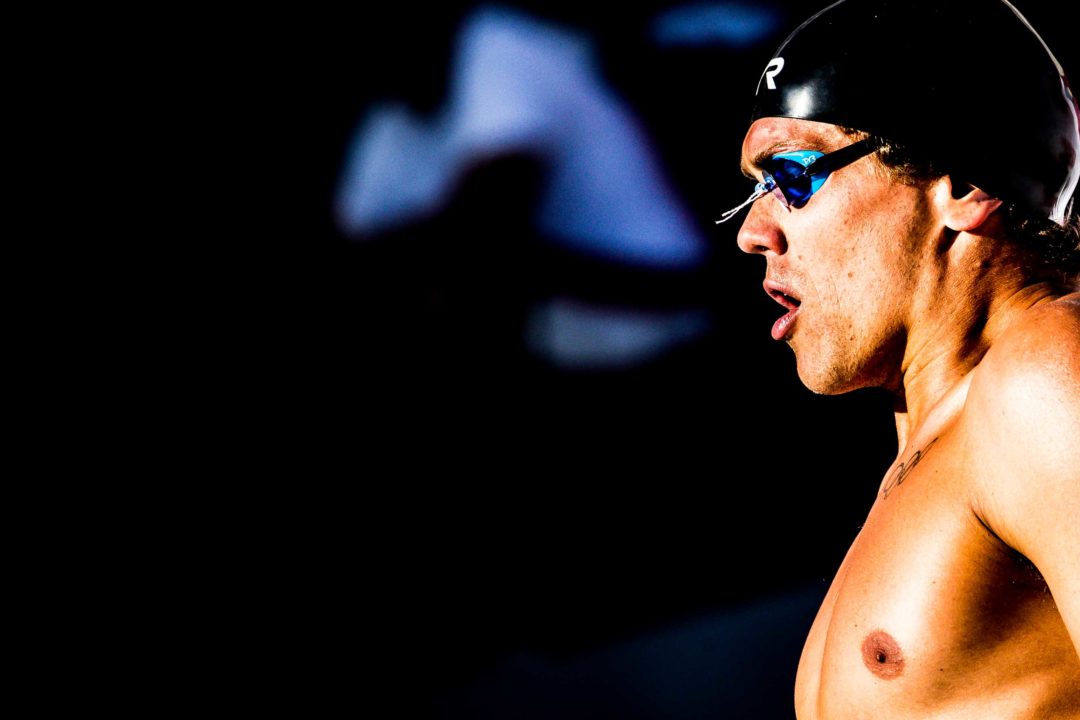 Tom Shields had another big swim on Saturday after swimming a lifetime best in the 200 yard fly on Friday in San Diego, California. Archive photo via Jack Spitser/Spitser Photography

28-year old American Olympian and Olympic gold medalist Tom Shields swam a 51.73 in the 100 fly in long course meters on Saturday. Racing another exhibition swim on the 2nd day of competition between the UCSD and Cal collegiate programs, collegians and pros moved from yards swimming on Friday to meters swimming on Saturday.

That’s his best in-season time since the 2015 FINA World Cup series, where he swam 51.3 and 51.2 in Moscow and Paris within a week. Shields, who is reportedly unrested for this meet, swam a 51.59 to win gold at last summer’s Pan American Games in the 100 fly that was his season-best in the event.

In that 100 fly, the 2nd-place finisher was German National Teamer Marius Kusch in 51.83. Kusch, who trains with Team Elite in San Diego, was a dominant swimmer at NCAA Division II Queens and last summer swam the 6 best 100 long course meter fly times of his career. His 51.83 on Saturday would have matched his lifetime best coming into 2019.

On Friday, Shields swam a 1:38.80 in the 200 yard fly that was his lifetime best and makes him the 4th-best performer in history.

Other Highlights of the Long Course session:

Shields doesn’t come out to play!

Or you might say, Shields came out to play😏

Great swim. With the 200 Fly yesterday looks to be in the right place going in to trials.

Hoping Shields can drop a sub 51 fly by trials. I think that’s what its gonna take to make it.

Seeing what Rooney did last summer, that seems fair to say. Does seem like Shields is on track to get there.

I think that that second spot (behind Dressel of course) is going to be fought between Shields and Rooney, maybe Conger and Seliskar.

Crazy to think that Conger is an outside shot at making the team now. Desorbo wya??

Does he even focus on the 200fly anymore? I think I haven’t seen him doing 2fly at pro swim series in a long time.

It is crazy. As in delusional.