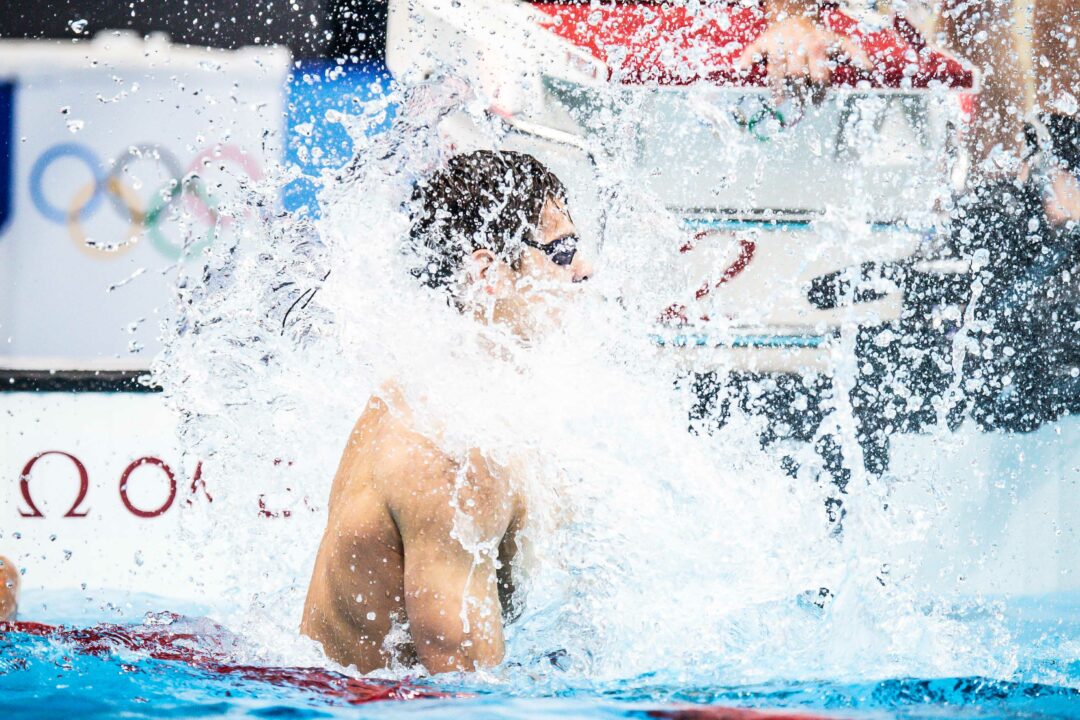 Russia made its appearance at #5, thanks to a 1-2 finish in the men's 100 back. Great Britain moved from 5th to 3rd with a 1-2 sweep in the 200 free. Current photo via Jack Spitser/Spitser Photography

The third finals session came with big statements from the Russian Olympic Committee and Great Britain, who together swept the gold and silver medals in two of the four finals.

The British freestylers Tom Dean and Duncan Scott went 1-2 in the 200 final with nearly identical times. Dean out-touched his teammate 1:44.22 to 1:44.26 and, in the process, undercut Scott’s GBR National Record as well. Their performances kept the British team in 3rd place on the medal table. In 2016, they were 5th at the end of Day 3.

Russians Evgeny Rylov (51.98) and Kliment Kolesnikov (52.00) roared to a 1-2 finish in the 100 back, earning Russia’s first-ever Olympic gold medal in the event and pulling their nation into the 5th spot on the table. Five years ago they were 11th on Day 3 with one silver medal.

The United States maintained their slim lead over Australia thanks to the women’s 100 breast, where Lydia Jacoby stunned Olympic Record-holder Tatjana Schoenmaker of South Africa and World Record-holder and defending champion, USA’s Lilly King, for the gold. Ryan Murphy added a bronze in the 100 back, an event he won in Rio with a World and Olympic record of 51.85. This year, he was .34 off with his third-place 52.19. Regan Smith pulled in another bronze medal for Team USA, also in the 100 back, with her 58.05.

Australia’s Kaylee McKeown took down the Olympic Record but fell .02 short of her World Record in winning the 100 back in 57.47. Her gold medal kept Australia in the hunt against the United States. Both nations now have three gold medals. In 2016, after 3 days of swimming in Rio, USA had 4 gold to AUS’s 2, and led with 14 overall medals to Australia’s 3. This year, that ratio has shrunk to 12-to-7.

Kylie Masse took silver in the 100 back, allowing Canada to remain in the top-4 after 3 days. In Rio, Canada ranked 9th at this point in the competition, with one silver and two bronze medals.

Schoenmaker’s silver was South Africa’s first medal this year. After 3 days in Rio, they had two silvers and ranked 8th.

Brazil got on the board with a bronze medal from Fernando Scheffer in the 200 free.

What I find interesting is the lack of World and Olympic records being turned in. It’s still early in the competition, but many of the Olympic records go back to the Tech suit era. There are some exceptions, but I thought that overall, winning times were slower than I would expect. I blame it on the pandemic mostly.
The lack of crowds and the energy generated from them is also hurting the swimmers.
And with finals in the morning, many swimmers just aren’t used to that. It’s the same for everyone, but not really.
If you trace the winning times from the inception of the Olympics, there’s always been a major improvement in the top three times… Read more »

Add gold for USA, silver for Italy, and bronze for China if we’re talking legitimate medals

I love how you Americans put ‘Total Medals’ first as if all medals are equal. I think you will find that the rest of the world counts golds (total), silver (total) and bronze (total). Strange that the medals come in different colours – seems to say they are not all the same….. LOL…

can you see what is directly to the right of the total medal count? or were you blinded by your hatred for the US?

The order is right regardless of the placement of the columns but having the total column first does make it appear the most important column when it’s not. Swimswam placed it last for Rio.

I had also noticed this. It’s worse when you realise they also put Gold first (on the left) and total last (on the right) for Gwangju and Budapest as well.

Comon SwimSwam, have some consistency.

The US is one of only 3 countries that doesn’t use the metric system too…go figure! 🙂

The last time a non-US team got 6 golds was 2008, and it’s looking like Australia has a shot at matching (or even exceeding) that

All it means to me is the Russians have found a new way to cheat the drug test.

Think that, barring brain-farts on relays or people getting sick, Rio will be surpassed easily. My “night before” thoughts was a range of 12 to 15. Think the low-side will be met, top side is plausible but probably needs a few iffy ones to go their way.

You think we need iffy medals to get to 15?

Having a conservative but realistic outlook, and assuming no DQs, I think we can reliably say we will get at least one medal in men’s 100Free and 200Free relay, as well as women’s 100Free, 200Free, 800Free, 200Back, 200 relay and medley relay. That would give us 14 total, while being fairly conservative. It’s possible we could get doubles in W 50 and 100 free, as well as medal in the M200 breast, M medley and mixed relay.

I’d say our floor is 12 and our absolute dream result is 20. Realistically I’d say we get about 15.

True- Lock it in Eddy!

Women’s 100 free belongs higher than you put it for medal chance.

Pretty sure top 2 in the world are Australian right?

Yeah. Assuming they both make the final, it would be pretty odd if neither of them make the top 3.