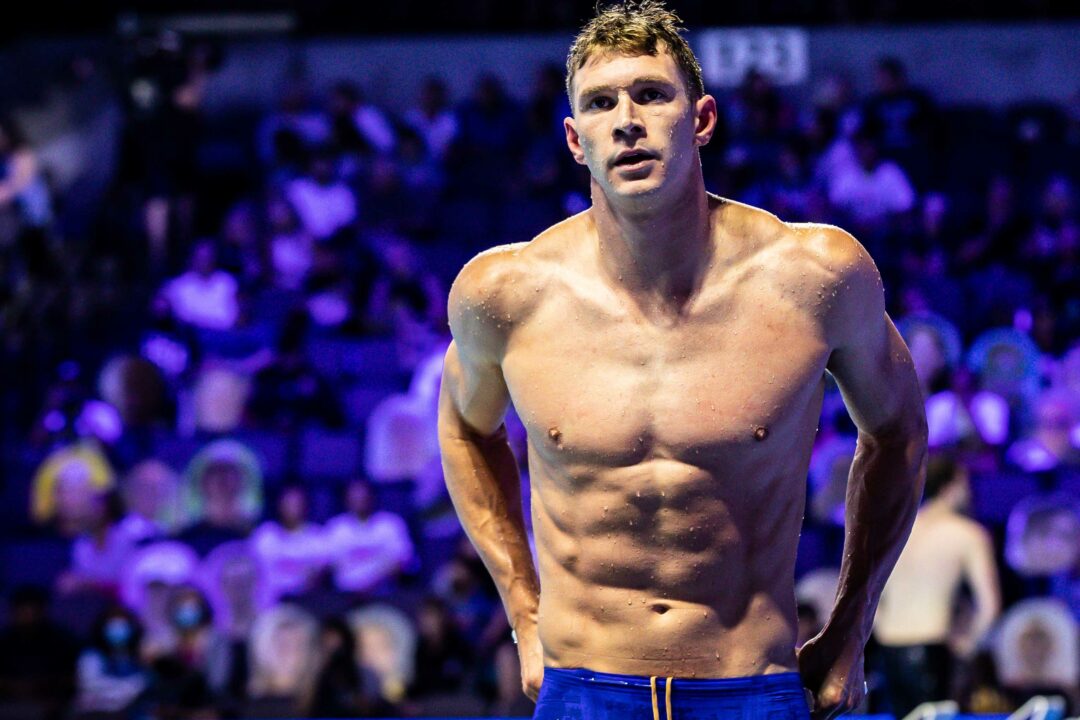 If World Record holder Ryan Murphy (above) wins gold in the 100 backstroke in Tokyo, this will be America's 7th consecutive gold medal in this event. Archive photo via Jack Spitser/Spitser Photography

USA’s Ryan Murphy, the World Record holder and defending Olympic champion in the 100 back, has the opportunity to up America’s win streak in this event to seven consecutive Olympic golds.

Americans have won the event the past six Olympic Games:

Murphy’s record stands at 51.85 from the Rio Olympics and his fastest time since then was a 51.94 from the 2018 Pan Pacific Championships.

We’ve seen this world record fall pretty often at the Olympic Games: 11 times. And there are a few competitors within striking distance of it this time around.

Russia’s Evgeny Rylov and Kliment Kolesnikov top this season’s world rankings in this event. Rylov placed 6th at the Rio Olympics while this will be Kolesnikov’s Olympic debut.

2016 Olympic silver medalist Xu Jiayu of China holds the fastest time since the Rio Olympics, though, with a 51.86 from 2017.

Jiayu outswam bronze medalist David Plummer in 2016 by taking out the first 50 meters faster than nearly everyone in the race besides Australia’s Mitch Larkin. Jiayu and Plummer had the exact same second 50 split.

Jiayu also has the advantage over other athletes who are not from Asia because he will be competing in a closer time zone to what he trains in. Beijing, China is only an hour behind Tokyo’s time zone.

Murphy has been more consistent than Kolesnikov and Rylov, lately though.

Both Murphy and Hunter Armstrong swam 52 mid / 52 low in the semifinals and finals of the U.S. Olympic Trials in June. In the semifinals, Murphy posted a season-best time of 52.22 and Armstrong dropped down to 52.48 in finals.

Glinta made it to the final in this event at the Rio Olympics where he placed 8th.

Larkin is walking into Tokyo with the most experience. This will be the 28-year-old’s 3rd Olympic Games and he placed 4th at the Rio Olympics by .03 behind bronze medalist Plummer in this event. He outsplit everyone on the first 50 meters (25.18) but didn’t have the same finishing speed.

Italian 20-year-old Thomas Ceccon is ranked 9th in the world this season with the lifetime best 52.84 he swam in December.  He has a solid chance of making the final, but he will have to fend off the likes of French 19-year-old Mewen Tomac who beat him by .02 at the 2021 European Championships with a 53.00.

Italian National Record holder Ceccon won the 100 back at the recent Sette Colli Trophy (53.84), but was a ways off his best time.

There are a few historic things on the line in Tokyo besides the Americans’ win streak.

Four men have won gold twice in this event and no one has surpassed two gold medals. Murphy stands to join the likes of Warren Paoa Kealoha, David Theile, Roland Matthes, and Peirsol if he wins his 2nd gold medal.

Only Matthes has ever made three Olympic finals in this event and 2012 bronze medalist Ryosuke Irie of Japan has a chance to make his third final. Irie placed 6th at 2019 World Champs (53.22) but has not broken 53.00 yet this season.

He beat Apostolos, Tomac, Ceccon and Rylov and this was his first time under 53.00.

Gonzalez de Oliveira placed 20th in this event at the Rio Olympics but his recent 52.90 ranks him 14th in the world this season and puts him in contention to snag a spot in the Olympic final if he lowers it further.

I think it will be :

A relatively slow regeneration of Japanese swimmers in backstroke; I still see the same Irie Ryosuke competing in this event, rather than find someone like Daichi Suzuki who upset the favorite David Berkoff at Seoul 1988.
The 1988 final is one of the exciting race I have seen, because of 4 guys : Berkoff, Suzuki, Igor Poliansky and Sergey Zabolotnov, doing underwater for more than 15 meters.

Unpopular opinion – Armstrong makes the podium and Jaiyu, Larkin, and Kolesnikov miss out.

Ryosuke Irie of Japan may have a hard time winning medals, but he will definitely advance to the finals.

The same Irie Ryosuke that I have been seeing since 2008; it indicates very slow regeneration in Japanese backstroke.

Tough one to call.

Am thinking it can go either way between Murphy and Rylov. Kolesnikov and Xu are more X factors. Armstrong looks the most likely gatecrasher.

You are going to lose your Aussie citizenship soon, this is the Aussie swim team not the cricket team.
HAHA. Please note said in jest with smile on my face.

I’m an old codger who’s seen the bleak periods as well as the “years of plenty” so I have a somewhat different view on what is “usual programming” and thus expectations.

Low on a lot of AUS swimmers ? Moreso those who have proven CVs (ie over 2-3 years/2-3 World level meets) of non performance/erratic performance.

Murphy at plus 275 (Gamble Responsibly, call 1-800 Gambler if you think you have a problem) is about as good of a bet as I’ve seen.

Sadly you don’t seem to be able to parlay the swimming bets.

I’ve come to the realization I’m the target demographic for swim betting and if that’s wrong, I don’t want to be right.