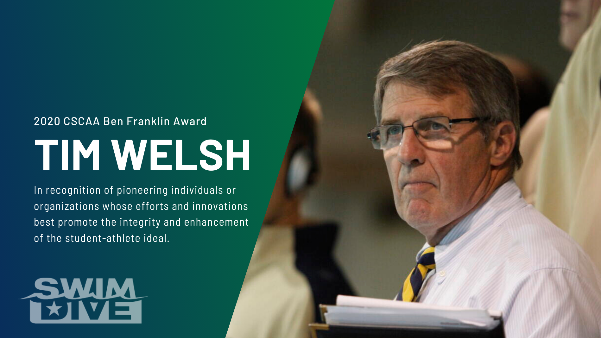 We’ve created some free backgrounds to use on Zoom and show your friends and family how much you love swimming, even when you can’t do it.

Follow this punishing dryland workout that emphasizes the core, with the main set’s 429 reps matching the number of days until the U.S. Olympic Trials.

March 20, 2020 – Colorado Springs, CO – Tim Welsh, who captured two NCAA team titles and led the University of Notre Dame for thirty years has been selected for the 2020 CSCAA Benjamin Franklin Award.  The selection from the Executive Board of the College Swimming & Diving Coaches Association (CSCAA) is made in recognition of pioneering individuals or organizations whose efforts and innovations best promote the integrity and enhancement of the student-athlete ideal.

Welsh led Notre Dame swimming into the modern era, producing the program’s first All-American and over twenty conference titles including six in the BIG EAST.  Moreover, he led Johns Hopkins University to two NCAA Division III National Championships during his eight years there.

Within the swimming community, Welsh is better known for his role as educator.  In 2011 Notre Dame administrator Mike Danch explained that Welsh, “is the only coach I know who, at his season-ending banquet, gives every one of his graduating seniors a book that somehow reflects their relationship. Conversely, the seniors give him a book that reflects something they’ve learned along the way.”

Welsh’s humility and sportsmanship is legendary as evidenced by his actions at the 2009 Big East Championship where he lent a fellow team high-tech competition suits after they were unable to obtain them.  It was a gesture that Notre Dame recognized when it awarded Welsh the Presidential Achievement Award. Less recognized, was the image, captured by Notre Dame media relations assistant Alan George, of Welsh “picking up trash and wet towels around the pool deck” while the team was celebrating and making plans for the night.

Welsh has been a part of a long list of leadership positions in the sport.  He has received both the Richard E. Steadman Award and the National Collegiate Scholastic Trophy from the CSCAA.  He served as president of the American Swimming Coaches Association from 2009-11, spearheading both the CSCAA Coach Academy and ASCA Fellows Program.

Welsh will be recognized at the 60th Annual CSCAA College Swimming & Diving Awards, now scheduled for May 2021. He was nominated for the Franklin Award along with fellow coaches Jamie Rudisill (West Chester University) and Sean Peters (Wayne State University).

Founded in 1922, the College Swimming Coaches Association of America (CSCAA) is the first professional association of college coaches in the United States.  The CSCAA is dedicated to serving and providing leadership for the advancement of the sport of swimming and diving at the collegiate level. The CSCAA works to

The Ben Franklin Award seeks to recognize pioneering individuals or organizations whose efforts and innovations best promote the integrity and enhancement of the student-athlete ideal.  Nominees contributions may be technical, social, economic or through their leadership actions.  Ben Franklin himself was an avid swimmer who consistently promoted its healthful benefits and also an innovator, having created a pair of swim fins.

Congratulations Coach Welsh! So well deserved. What an amazing asset you are to the University of Notre Dame and thank you for the indelible impact you made on the men and women you coached during your career.

“Well done far exceeds well said” only begins to capture the Tim Welsh we all know. He has a career of both well done and well said. Congratulations Coach Welsh… well done,,,,well deserved.