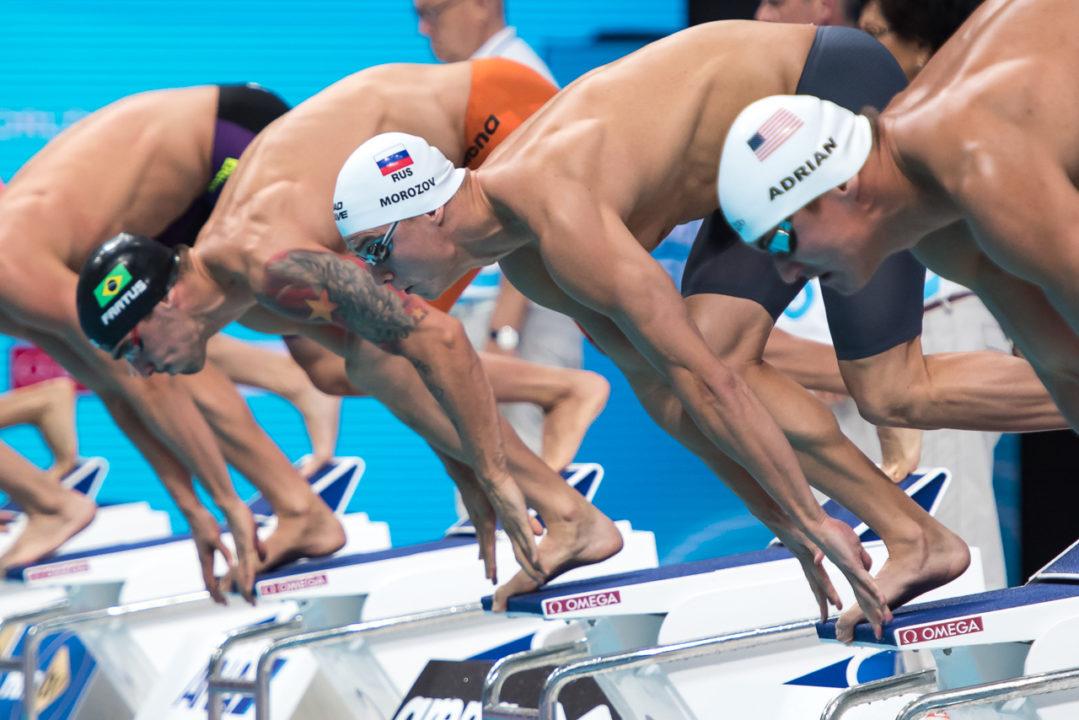 Now that the 2018 FINA World Cup Series has ended and we know that Sweden’s Sarah Sjostrom and Russia’s Vlad Morozov were deemed the overall circuit winners, let’s take a look back at some of the monumental swims that took place throughout the 7-stop tour.

Keep in mind that the first 2 stops, Kazan and Doha, were contested in long course meters, while the remainder of the meets were conducted in short course meters format.

While competing on day 3 of the FINA World Cup Series stop in Tokyo, Chinese swimmer Xu Jiayu cranked out a new World Record in the men’s 100m backstroke. The 23-year-old split 23.76/25.12 en route to becoming the fastest short course meters swimmer ever in this event. His time overtook the previous WR of 48.90 set by Russia’s Kliment Kolesnikov in December of 2017. Only 6 men have ever dipped under the 49-second threshold in the SCM men’s 100 backstroke event, including Americans Matt Grevers and Nick Thoman.

At 38 years old, Brazilian Nicholas Santos proved once again that age is just a number, crushing a new World Record in the men’s 50m fly at the Budapest stop. His time of 21.75 was enough to break Steffen Deibler‘s record of 21.80 that had stood for nearly nine years. With this record swim, Santos joined Deibler, Roland Schoeman and Le Clos as the only men to break 22 seconds in the event.

After narrowly missing the mark at the World Cup stop in Eindhoven, China’s Wang Jianjiahe got the job done in Budapest as she smashed the women’s SCM 400 free world record in a time of 3:53.97. That swim knocked off Mireia Belmonte‘s mark of 3:54.52 set back in 2013 at a World Cup stop in Berlin. Wang held off American silver medalist Leah Smith in the race, which was a confidence booster for the young Chinese star who is just 16 years of age.

While competing in Budapest, Jamaican veteran Alia Atkinson lowered her previous 50 breaststroke World Record mark of 28.64 down to 28.56 en route to gold. Atkinson had broken the 2009 mark of Jessica Hardy (28.80) at the Tokyo stop of the World Cup circuit in 2016, and with this swim now owns eight swims under 29 seconds, a feat only done 14 times in history. In addition to owning eight of the 14 sub-29 swims in history, Atkinson also owns five of the all-time top-10.

American Kelsi Dahlia earned a new American Record while competing in Budapest, lowering her previous mark from Eindhoven in the women’s 100m fly down to a scorching 54.84. The U.S. Olympian’s time checked in as the 2nd fastest performance in history, with Sweden’s Sarah Sjostrom‘s 2014 World Record of 54.61 the only time anyone has been faster. Sjostrom herself was in this race in Budapest, finishing 2nd, which means Dahlia can now say she’s beaten the World Record holder and LCM Olympic champion in this event.

While competing in Singapore, Morozov became just the 2nd man ever to dip under the 45-second threshold in the men’s 100 freestyle by clocking a downright frightening time of 44.95. The former USC Trojan registered splits of 21.34/23.61 and produce a new Russian National Record and World Cup Record of 44.95. The previous World Cup Record stood at the 45.16 Morozov registered in Tokyo. The only man faster than Morozov is the World Record holder Amaury Leveaux of France, who punched a 44.94 back in 2008. Morozov’s mark painstakingly fell just .01 shy of that WR to become the 2nd fastest performance in history.

Sjostrom did damage early on in the World Cup circuit, blasting a new LCM World Cup Record in the 100m butterfly at the Doha stop. At the very first stop of Kazan, Sjostrom had tied the 100 fly record of 57.56 set by Japan’s Rikako Ikee in 2015 in the prelims, and then took just over a tenth off in the final to win gold in 57.42. The 25-year-old, however, went on to hack a second off of that outing in Doha, however, to claim a flaming hot mark of 56.46 and establish a new World Cup Record.

19-year-old Rikako Ikee got a major confidence boost on her home turf, beating Sjostrom in the women’s 100m butterfly at the Tokyo stop. In the final, Ikee busted out a winning effort of 55.31 to Sjostrom’s 55.56 to take gold. Ikee’s time 55.31 checked in as the 16th fastest performance of all-time and the teen now slides into the 8th slot among the world’s fastest performers ever in this event.

While competing in Kazan, American Michael Andrew powered his way to a narrow victory over Olympic gold medalist Chad Le Clos of South African in the LCM 100 butterfly. Splitting 23.92/28.04, Andrew clocked the only sub-52 second outing of the field in 51.96, a time within half a second of his personal best of 51.53 from Pan Pacs. Le Clos touched just .04 later in 52.00 for silver in the race. Andrew would lower his time to a 51.83 in Doha to win again, but in a Le Clos-less field that time around.

I gotta say Vlad’s 100 Free is better than all of em but the Men’s 50 fly. The rest were soft records and that 100 free is no joke relatively. Maybe 100 IM might be a little better but I bet if you ask Vlad he’ll tell you he’s happier with the 44 than the 100 IM WR (until he goes 49 then that’s a different story). I could see a case being made for Alia’s 50 Breast. With Murph about to go a 48 low next month I am not THAT impressed with the 48.8 but I guess we’ll see.

To get THAT close to Amaury Leveaux SICK WR is major achievement.

Especially taking into account the fact that Leveaux’s best time in SCM without a rubber suit is 47.3!

Agreed. Morozov’s 44.95 was an absolute masterpiece.

Can someone on swimswam do a write up on top 8 swims per event?

All event winners and their resp. times are listed here: https://en.wikipedia.org/wiki/2018_FINA_Swimming_World_Cup