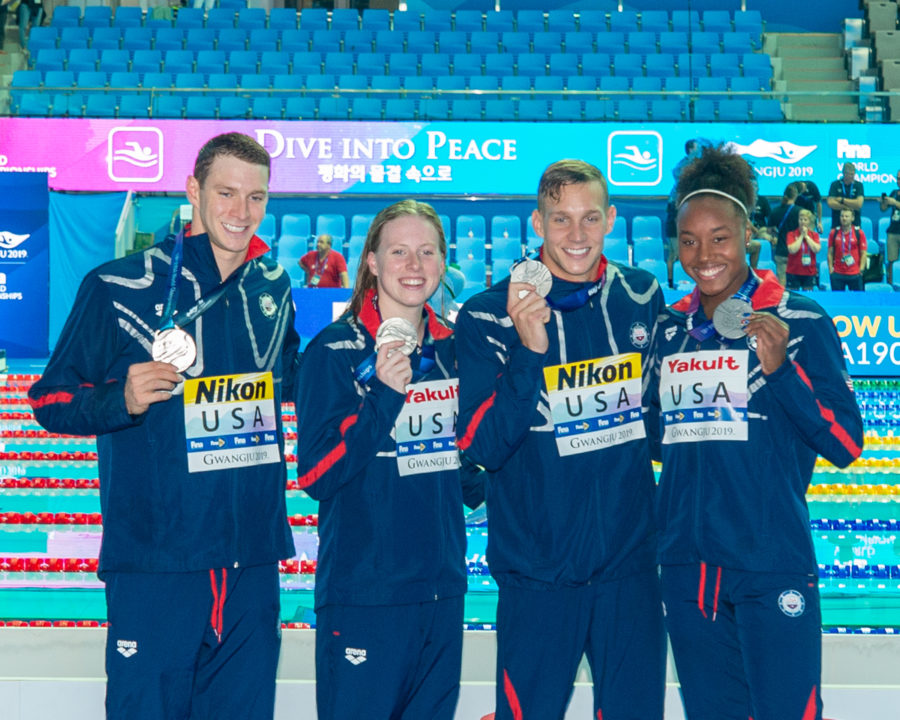 The United States' 29 gold medals were it's most since 1984, while 19 total medals for Australia almost equalled its 2012 and 2016 numbers combined. Archive photo via “Rafael/Domeyko Photography”

Following our “The Trials That Would Have Been” series, where we predicted how the 2020 U.S. Olympic Trials would’ve played out had the event not been cancelled due to the coronavirus pandemic, last week featured a similar series, “The Olympics That Would Have Been”,  for the postponed Tokyo Olympic Games.

The results were hypothetical, looking at how the events may have played out based on the information available on each athlete’s form prior to the pandemic. Below is an analysis of the results.

With our 2020 Olympics That Would Have Been in the books, it’s time to look back at the hypothetical results and see how things overall compare to recent editions of the Games.

As we look at the medal table, it’s important to remember that there were three events that made their Olympic debut in 2020, meaning more medals were available to be won (men’s 800 freestyle, women’s 1500 freestyle, mixed 4×100 medley relay) than in any year previous.

Check out the final medal table for the hypothetical 2020 Games:

Canada failed to win a gold medal, but its total of nine gives them its highest number since 1984 (10). In 2016, the Canadians won eight medals.

Check out the London and Rio Olympic swimming medal tables below for reference:

*Does not include open water medals

*Does not include open water medals

There ended up being four nations who won a medal in 2016 that didn’t in 2020, and six who made their way onto the medal table after failing to do so in Rio. The countries that medalled in 2016 but didn’t here were Kazakhstan, Belgium, Spain and Singapore, while Lithuania, Norway, Greece, Ukraine, Germany and the Netherlands won a hypothetical medal after falling short four years ago.

Only 1 bronze for Germany would be super disappointing. I hope for at least 3 medals + 1 or 2 open water medals.
@SwimSwam: Will there be “The Olympics That Would Have Been” articles for the open water races?
I think Canada and especially Australia are a bit “overrated”.

I can live with goose egg from Brazil.

We’ll think about doing open water. The challenge is that open water is substantially less predictable than pool swimming because of the higher variation in the actual racing element. So, we’ll have to really think hard about it.

I don’t get the problem. So you don’t want to make a prediction (for something that noone will ever be able to check whetther you were right or wrong), because it is less predictable? I also don’t see how open water swimming is less predictable than for example women’s 200 fly or women’s 50 free. The first open water event will take place tomorrow, so you don’t have much time to think about it. I guess the open water events don’t interest american fans as much, so it is somewhat understandable that you don’t care too much about it.

Make your predictions, then we’ll all downvote and argue in the comments. Simple as that.

do you feel better?

Interesting to see the reaction to this comment. So which part is it that people don’t agree with?
a) Germany winning 1 bronze would be disappointing
b) Me hoping for Germany to win 1 or 2 open water medals
c) Canada being overrated with 9 medals
d) Australia being overrated with 19 medals
Would love to hear the reasoning of the people who downvoted my original comment.

I believe that Köhler would have beaten Titmus this year if Titmus would have even competed in the 800 free.
The only other possible female medal contender is Hentke in women’s 200 fly. Köhler should medal in the 1500 free, Wellbrock should win more than bronze in the 1500 free and at least one out of Wellbrock and Köhler should medal in the 800 free. Other athletes like Koch (men’s 200 breast), Heintz (men’s 200 IM), Hentke (women’s 200 fly) or Kusch (men’s 100 fly) have outside medal chances at best.

USA probably about right; I don’t feel the team looks like it’ll be as strong as 2016 relative to competition, and 4 fewer medals sounds about right to me. I think the Australian team looks better than 2016, but not 9 medals better. 12-15 medals would be good for the Australians imo. I think GBR will be be sending a stronger team than 2016, so fewer medals would be a little disappointing, but everything went so well for us in 2016 it’s perfectly possible and probably about right. I expect 6 or 7 medals for Canada rather than 9 (MacNeil, 3x relays look very likely, and Masse, Oleksiak, Pickrem, Wog & Ruck will throw in a few medals between them).… Read more »

On my own numbers, I actually had the US around 25 similarly to you, but I tend to low-ball them by a few so figured 28/29 would be around the end mark.

The end of the Lochte/Phelps era. The USA men will feel it.

The USA women are legitimate (Manuel, Ledecky, Smith, King, Flickinger). If you are going to low ball team USA, it better be on the men’s side of the ledger.

Flickinger is on the list since Hali has been one of the top performers in the world rankings since 2018.

Am tending to be on the same or similar page. USA stated medal total is within the range of plausibility, altbeit at the high outer limit. 25-29 is my “realistic” range Concur re AUS. 19 is honestly an “all planets aligning” scenario. 15-16 is my top line of “optimistic but reasonable” with 10-12 being my most likely. 4 golds is plausible and probably one they would walk away reasonably happy with given London & Rio. Best case gold scenario would probably be 6 but equally realistically could be as low as 1. Agree that 9 might be a bit top side of expectations for CAN but correspondingly, I could see 1-2 of those minor medals turning up gold. GBR probably… Read more »

Am on the same or similar page with your summations. The stated USA total of 32 IS within the realms of plausibility but distinctly “high end”; my range is around 25-28 given this US men’s side looks slightly weaker than previous editions. 19 medals for AUS is real “everything goes right plus outside bets” territory. 15-16 is really my most optimistic scenario but suspect its likely to be anywhere between 8 and 13. 4 golds is a “defensible” prediction; 6 is my “top line” but would not be surprised if its as low as 1-2. Concur re GBR being around ‘ball park” re total medals although I wouldn’t be surprised if there isnt at least 1 more gold CHN is… Read more »

The real question is how many WRs were hypothetically broken

On the women’s side of the ledger, the only world record(s) that will be broken will be by an in form Regan Smith. That does not take into account the relays.