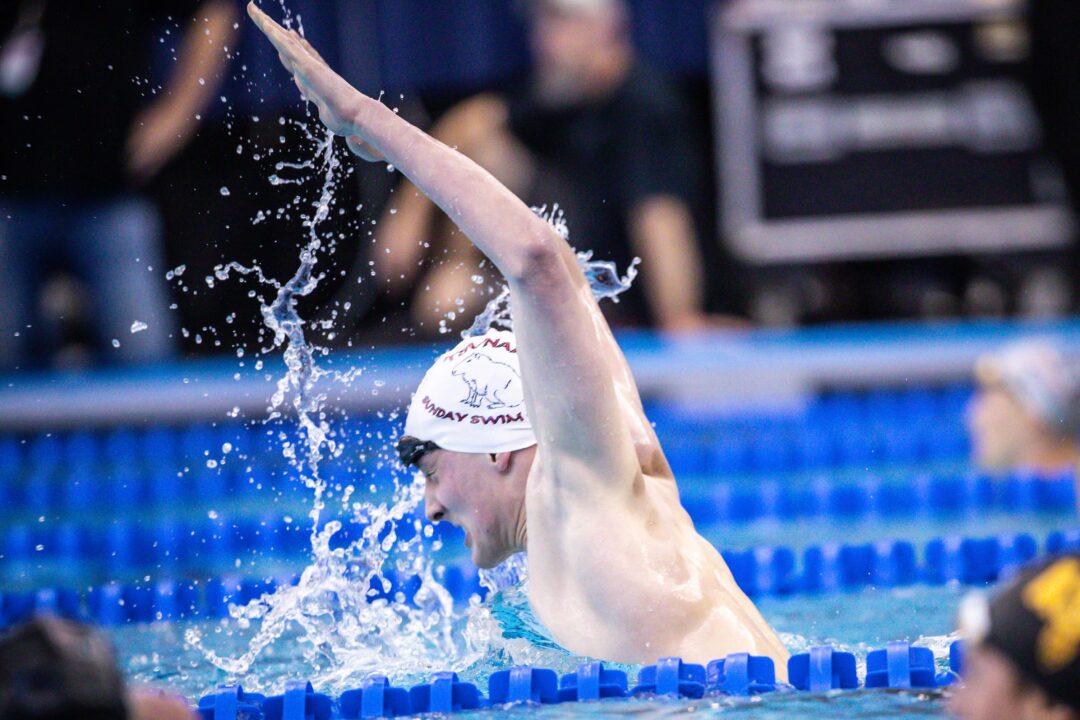 Enyeart was almost four seconds faster in the 400 free this year than he was at this meet a year ago and would have finished 6th at US International Trials. Archive photo via Jack Spitser/Spitser Photography

Highlighting night 4 of NCSAs was Alec Enyeart of Tsunami Swim Team of Kansas City. Enyeart won the men’s 400 free in a 3:50.97, just off his best time of 3:50.18 which he swam in the B final in April to finish ninth at US International Team Trials. Notably, if he was in the A final then he would have finished fifth and his time here would have finished sixth. His time this year was almost four seconds faster than he was at this meet a year ago as he won the event in a 3:54.82 last summer.

In a tight race, 15 year old Rian Graham of Machine Aquatics came away with the win in the men’s 100 fly swimming a 55.11. The 15 year old came into the meet with a personal best of 57.30 from this meet a year ago. Also notably in the race, Kyle Peck of Stingrays Swim Team swam a 55.64 earning his fourth US Open cut during the meet.

Sun was able to pick up a win on the night as a member of Nation’s Capital 400 free relay. The relay of Aris Runnels, Camille Spink, Alexia Sawwa, and Sun won the women’s 400 free relay in a 3:50.06, winning the event by over a second and a half.

Lainey Mullins of Suburban Seahawks came away with the win in the women’s 400 free touching in a 4:13.56. She won the event by over three seconds. That time was faster than her previous best of 4:15.83 which she swam earlier this month. She is committed to Virginia for 2023.

Arlington Aquatic Club won the men’s 400 free relay in a 3:26.09. The team consisted of Kellen Cameron, Malcolm McKenzie, Nolan Dunkel, and JT Ewing. Notably, Ewing had the fastest split with a 49.82.

I heard this guy sits when he pees

Maybe why Luke is pushing Eddie to swim the 100, Texas needs some scoring there this year for sure