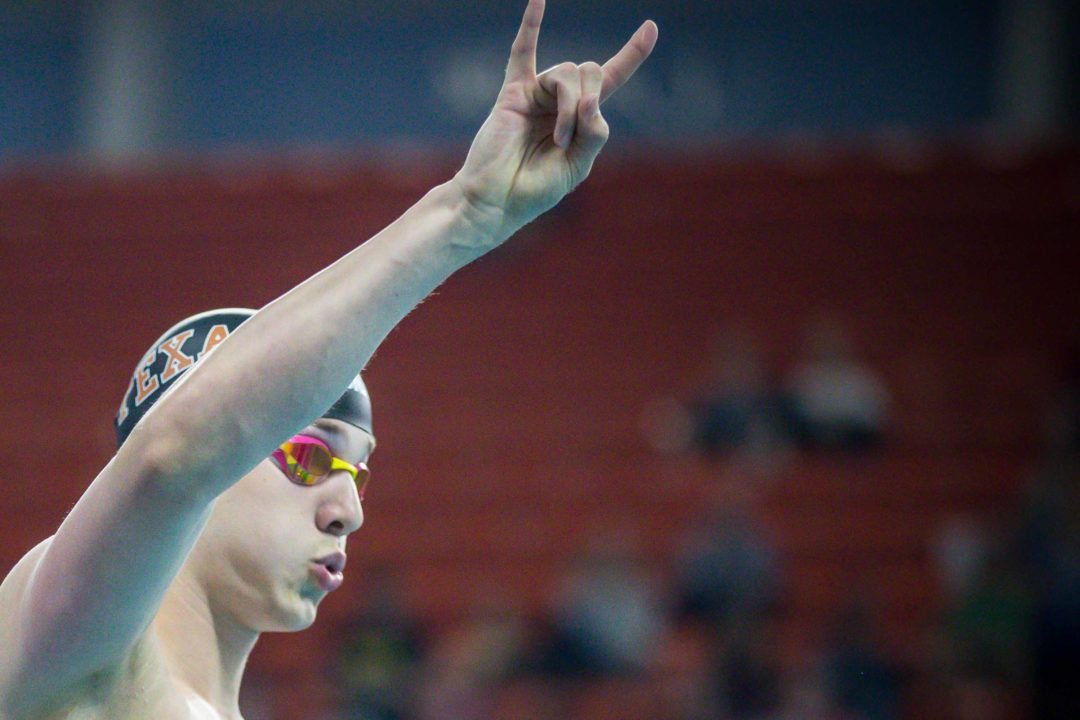 Only Texas or Cal have finished first or second at the NCAA Men's Championships since Michigan's 2013 title, and they went 1-2 to kick-off this year's meet. Archive photo via Jack Spitser/Spitser Photography

TEAM SCORES (THROUGH DAY ONE)

As we predicted in our 800 free relay preview, the night one win went to the Texas Longhorns, with Cal over a second behind for the runner-up finish.

It wasn’t the most electric first night, like we saw at the women’s meet, with half of the teams racing here adding from seed and Kieran Smith‘s second-best performance ever (1:29.66) the fastest time of the session. But what we saw up top with Texas and Cal continues the kind of dominance the two teams have had at this meet since Michigan’s NCAA title in 2013– only the Longhorns and Bears have finished top two at NCAAs for six meets running, and this is projected to be the seventh.

For Texas, they were more or less right on their seed, with Drew Kibler going a quick 1:30.59 to start off and then getting a 1:31.55 split from freshman Carson Foster. Cal, meanwhile, stocked up their backstroke group to follow Trenton Julian‘s 1:31.41 lead-off, and without having many primary 200 freestylers on the roster, still managed to beat the rest of the NCAA by over two seconds.

While the rest of the relays are likely to be much closer contests, this kind of performance from Texas and Cal is almost certainly going to persist on a team-level. Who will be the team to catch-up? And how soon? (Probably NC State and their monster incoming class, but let’s take this one season at a time).

Does Cal get a visit tomorrow from the first of the three ghosts from NCAAs past?

(Will diving steer the results yet again this time?)

There’s no need to say “this time” when you’ve already said “yet again.”

Coby Carrozza should’ve been on relay instead of Katz. Coby is hot