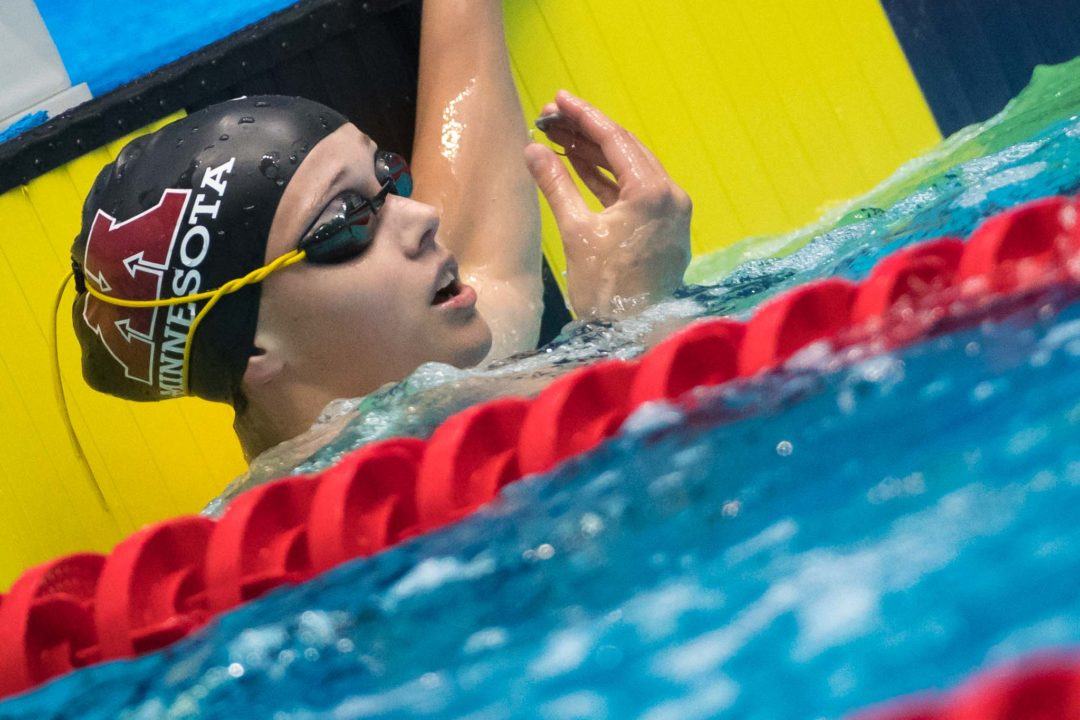 Rising Minnesota sophomore Tevyn Waddell had a great swim tonight in the 100 back, posting a 1:00.96 for a huge personal best. Waddell went a PR 1:02.11 at Worlds Trials a few weeks ago, a meet where she had a bunch of great performances, but it looks like she is continuing to roll this summer. She was 1:01.88 this morning for a PR, and took nearly a second off of that tonight. Jessica Unicomb was 2nd in 1:01.56– Unicomb broke Beata Nelson’s meet record with her morning 1:01.55, but tonight Waddell took it for herself.

For the men, Neil Wachtler of the Kansas City Blazers won a tight race with Badger Aquatics’ Justin Temprano in the 100 back. Wachtler, who swims collegiately for Denver, took the win at 56.44, over Temprano’s 56.58.

NASA’s Ella Tierney, a Texas Longhorn commit, dominated the women’s 200 free to kick off tonight’s finals session. She took over a second and a half off of her prelims swim to put up a 2:01.86, her first time under 2:02 and .24 drop from her old PR of 2:02.10. Wisconsin Aquatics’ Jessica Unicomb, who was 2:03.29 for the top prelims time, scratched the final.

Wisconsin Aquatics’ Joseph Milinovich got the job done in the men’s 400 IM (4:25.58), his time marking a lifetime best. Also getting a PR was Missouri State’s Phillip Willett, getting under 4:30 for the first time to take second at 4:29.01. Willett’s Missouri State teammate Josie Pearson dropped three quarters of a second for the win on the women’s side, going 4:53.85.

It’s unclear when Meet Mobile last updated the scores, so these may not be correct.