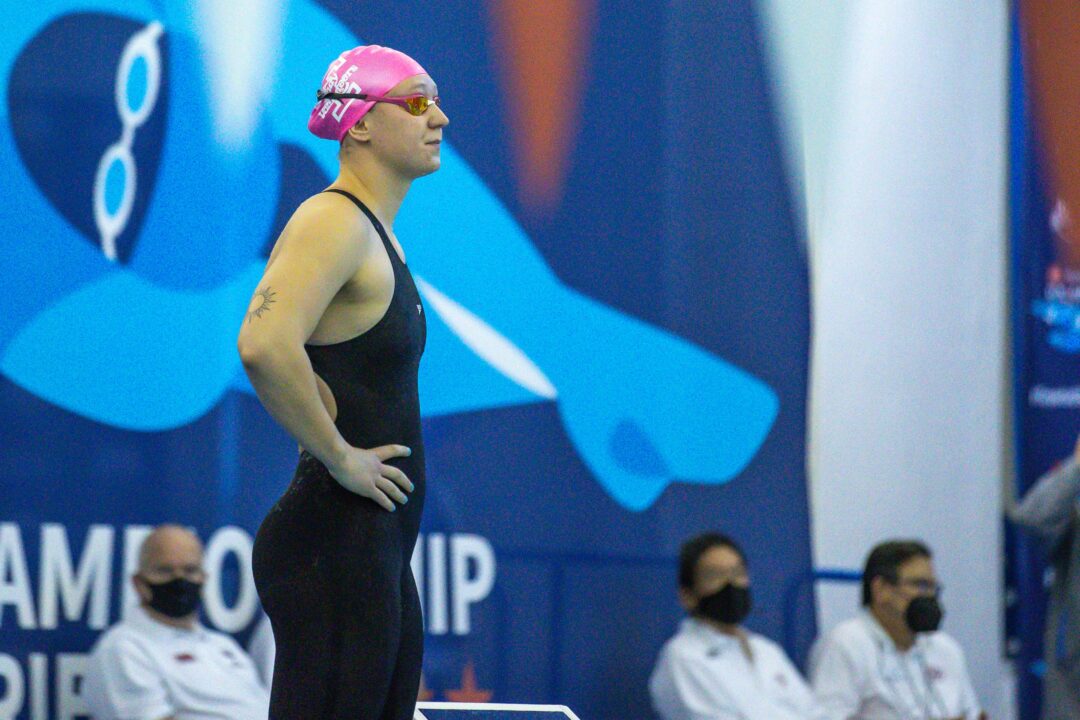 Olympian Bryce Mefford (above) made his season debut for the Cal Golden Bears, as both the Cal men and women defeated the Arizona State Sun Devils.

The Crimson won both relays as well as 9 of 14 individual events to establish their 74-point margin of victory.

After dropping a new lifetime best in the 200 free last night, Tennessee freshman Julia Mrozinski was back at it again on Friday night, blasting a massive lifetime best of 4:07.85 in the 400 free. Mrozinski had great closing speed, closing in 29.58 on the final 50 and 1:01.43 on the final 100. The Hamburg, Germany native’s prior lifetime best sat at 4:13.71 from over five years ago, so this swim is a potential massive breakthrough for the 21-year-old freshman.

To add a little perspective to her result, her time from Friday would have placed her 9th at the 2019 Long Course World Championships, missing the final by just 7 tenths, and would have placed her 14th in the heats at last summer’s Tokyo Olympic Games. Mrozinski currently sits 5th in the NCAA in the SCY equivalent 500 free with a 4:38.82 from November’s Tennessee Invite.

Tokyo 2020 US Olympian Catie DeLoof, who trains with the University of Virginia-based pro group and won a bronze medal as a member of the 4×100 free relay, won the 50 free in 25.41, well off of her lifetime best of 24.68. Catie’s older sister Ali, primarily a backstroker who trains with the University of Tennessee pro group, finished 8th in 26.59.

Long Island Aquatic Club’s Tess Howley followed up last night’s 100 fly lifetime best with a win tonight in the 200 fly. The 16 year old US National Junior Teamer and 2nd ranked recruit in the class of 2023 stopped the clock in 2:10.15, just .02 off of her lifetime best from last summer’s Speedo Summer Championships East. Her LIAC teammate Cavan Gormsen, the 4th ranked recruit in the class of 2023 and a UVA commit, finished runner-up to Mrozinski in the 400 free with a 4:16.03 and 7th in the 50 free with a 26.52.

Scholtz, the 20th ranked swimmer in the class of 2023 and a Texas commit, took the 200 breast in 2:20.44, winning by nearly 8 seconds. Scholtz was well off of his lifetime best of 2:16.43, set at last summer’s US Olympic Trials Wave I. Enyeart, a high school senior who recently switched his commitment from Minnesota to Texas, won the 400 free in 3:57.75 thanks to a massive final 50 split of 27.48 that propelled him past Tennessee sophomore and US Open Water National Teamer Joey Tepper. Enyeart’s lifetime best sits at 3:54.82 from last summer’s NCSA Championships.

The meet concludes on Saturday, with prelims scheduled to start at 10 AM EST and finals starting at 5 PM EST.