Tennessee and Virginia Split to Open Up 2018 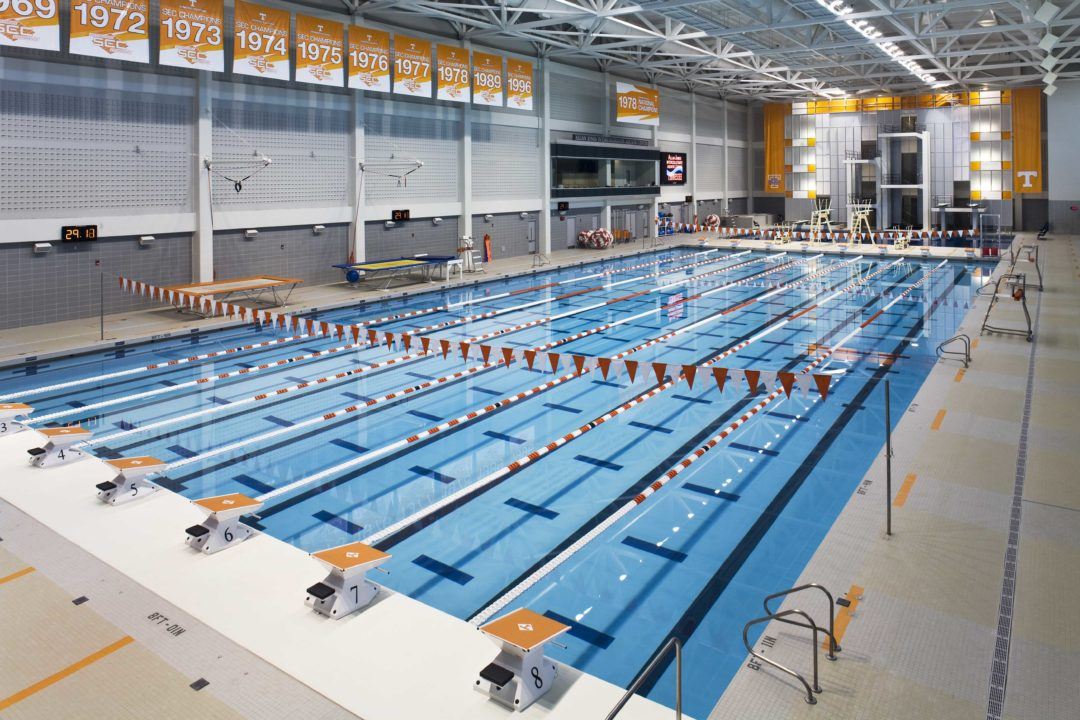 The Tennessee Volunteers and Virginia Cavaliers split their first meet of the calendar year.

The Volunteer men came out of winter training raring to go, as they won all except two events and easily defeated the Cavaliers in both teams’ first meet of 2018.  The day began with Peter John Stevens’ 23.35 breaststroke split, helping the Tennessee men beat Virginia by well over two seconds in the 200 medley relay.  David Heron then won the first individual event, the 1650, with a 15:02.63 that’s his fastest time of the season, beating the 15:24.14 he swam at the Tennessee Invite back in December.

But the big name for Volunteers was Kyle Decoursey.  We highlighted the junior in our post-invite power rankings, and he the junior swept all three of his freestyle events, earning wins in the 200 free, the 50 free, and the 100 free over the course of the day.  The 200 free was his most dominant victory, with his 1:36.20 over three seconds faster than the 2nd place finisher, Sam Schilling of UVA.

Teammate Sam McHugh nearly matched Decoursey’s effort, as McHugh won the 200 fly and the 200 IM, and also earned a 2nd place finish in the 200 back.  Stevens (100 breast), Taylor Abbott (500 free), Ryan Cotzee (100 fly), and Braga Verhage (100 back) all also earned individual victories.  The Volunteers closed out the meet with a victory in the 400 free relay that was highlighted by Decoursey’s 43.06 anchor split.

Brendan Casey (200 back) and Matthew Otto (200 breast) took home the only Cavalier victories.

On the women’s side, the Cavaliers bookended the meet with relay victories.  In the first event of the day, the 200 medley relay, Virginia anchor Caitlin Cooper dove in 0.8s of a second behind, but outsplit Tennessee’s Stanzi Mosley 21.84 to 22.61 to win by the narrowest of margins, 0.01s.  There wasn’t nearly as much drama in the final event, as Virginia’s A and B teams both finished ahead of Tennessee, as the Cavaliers wrapped up the meet winning 177-123.

Individually, Virginia was lead by Cooper and Jenn Marrkand, who each won two events.  Cooper took the 50/100 free double, while Marrkand won the 100 fly and the 500 free.  Morgan Hill (200 free) and Paige Madden (200 back) also won individual events for the Cavaliers.

Note: Scores included each team’s 1m and 3m results from the Tennessee Diving Invitational, which was held concurrently.

KNOXVILLE, Tenn. — Behind a four-victory performance by junior Kyle DeCoursey, the No. 12 Tennessee men’s swimming and diving team rolled to a 198-100 victory over No. 21 Virginia on Friday at Allan Jones Aquatic Center.

DeCoursey went three-for-three in individual events to lead the way for the Vols. He won the 200 freestyle (1:36.20) the 50 freestyle (20.06) and concluded his list with the 100 freestyle (44.23). He also swam the anchor leg to help the Vols rally past Virginia in the 400 freestyle relay to conclude the meet.

With his preliminary performance in the Tennessee Diving Invitational, redshirt junior Colin Zeng provided a victory in the 1-meter springboard (365.60), and senior Liam Stone got the win on 3-meter (379.60).

Tennessee Head Coach Matt Kredich:
“Both teams competed really well in places. Each team had competitive lulls, but that’s understandable coming out of the break. It’s something we need to address.

“For Kyle, It’s rare to have a four-event win day. The brightest spot for him was his 200 free. He’s worked on developing it this year. We’ve come to expect him to be competitive in the 50 and 100, but the 200 has become a real weapon for him. Sam’s 200 fly was big for us, and Ryan Coetzee in the 100 fly. Their leadership is starting to really define the team. That’s great because they’re all really competitive. For our men, we need to stay healthy and we’re on a good path right now. For our women, we need to get healthy. Once we get back to full strength, we’ll be formidable.”

KNOXVILLE, Tenn.-  The Virginia men’s and women’s swim diving teams split a dual meet against Tennessee, while the Cavalier diving teams completed the final day of the Tennessee Diving Invitational on Friday (Jan. 5) at the Jones Aquatic Center in Knoxville, Tenn.

“The team had a tough competition on the road today at Tennessee, with both teams (Tennessee) highly ranked,” head coach Todd DeSorbo said. “It is a great challenge to start off the new year on the road and in the middle of our heavy winter training. The meet started off really tight with the women winning the medley relay by one one-hundredth. We are definitely pleased with how the women’s team looks at this point, especially in some tough training. We’re using this as a baseline for the semester and looking to build off of it next week at Virginia Tech and the following week when we host our last meets against NC State and UNC. The usual suspects were carrying the team. Sydney Dusel won the first board of the week (against Tennessee) at the Tennessee Diving Invite (ninth overall), but unfortunately came down sick and could not compete in the second board. The seniors were also leading us with Caitlin Cooper and Jenn Marrkand winning their events and being a part of a couple of winning relays. Definitely excited about the direction of the program and looking forward to the next few weeks.

The men had a great opportunity to go against a great team in Tennessee as well. The thing that I am most excited about with the guys is that they had a lot of energy and were positive all the way throughout the meet. We had some great swims. To be honest, they surprised us with how well they swam. We are pretty pleased with where they are at this point in the season and they have taken a lot of steps forward in the four months our new coaching staff has been here. They keep us excited. They keep us proud. Likewise, with the women, we are looking forward to seeing how they progress for the rest of the season. Unfortunately, we left a couple of men and women at home because of illnesses,but had some people step up in their absence, which was nice to see as well. Hats off to both teams. I look forward to the next competition in a week against Virginia Tech.”

On the men’s side, redshirt junior Brendan Casey (Santa Monica, Calif.) and freshman Matthew Otto (Newark, Del.) finished first in the 200-yard backstroke and the 200-yard breaststroke, respectively. Casey recorded a time of 1:46.67, while Otto finished with a time of 1:59.10.

The meet ended with a first-place finish from the women’s 400-yard freestyle relay team of Hill, Cooper, Pang and junior Eryn Eddy(Loveland, Colo.), respectively. The Cavaliers recorded a time of 3:18.17 to top the event.

Freshman Tristan Gess (Lakewood, Colo.) finished 20th in the platform with a score of 245.75.

“Great day for us today,” head diving coach Jason Glorius said. “We did a lot of good things. I’m happy with how we did this weekend. We competed with confidence.”

The Cavaliers will return to action on Jan. 12 for a two day meet against Virginia Tech at the Christiansburg Aquatic Center in Christiansburg, Va.

PJ Stevens may be the fastest, most freakishly specialized 50 breaststroker the NCAA has ever had.

23.35 split in the middle of winter training? Only a handful of breaststrokers can do that at NCAAs…