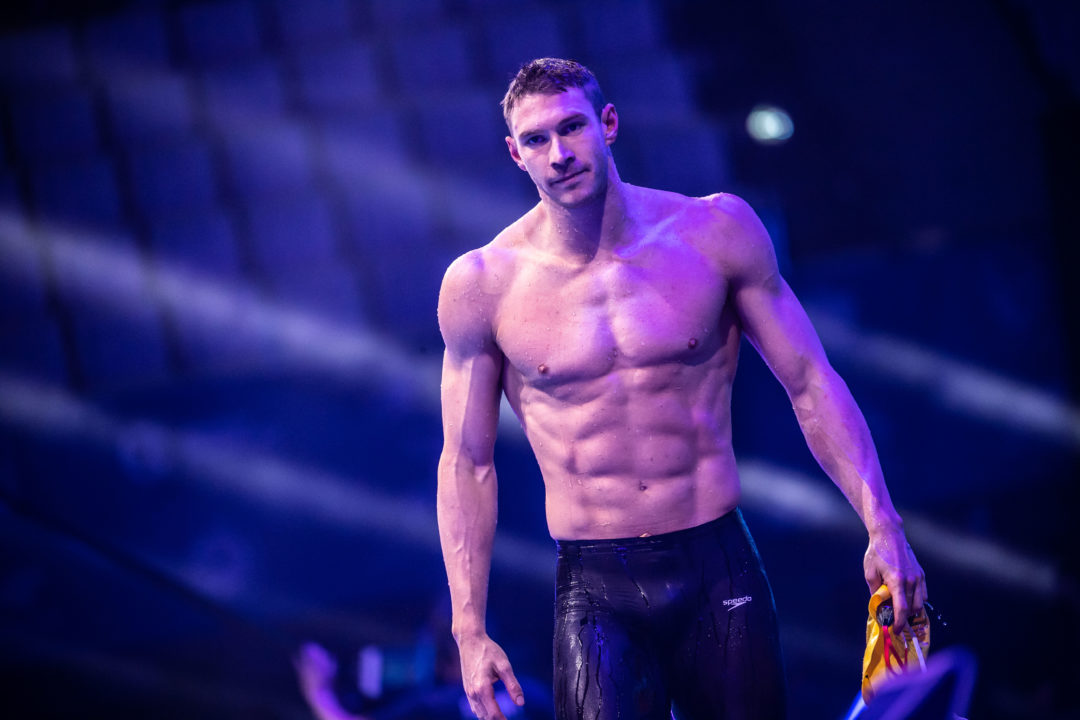 55% of voters said Ryan Murphy was more likely to defend his Olympic 100 back title than Kosuke Hagino in the 400 IM or Kyle Chalmers in the 100 free. Archive photo via Mike Lewis/Ola Vista Photography

Our most recent poll asked SwimSwam readers to pick the most likely of three 2016 Olympic champs to defend their titles:

Question: Who has the best shot to defend their 2016 Olympic title?

More than half of voters said Ryan Murphy was more likely to defend his 2016 Olympic 100 back title than Kosuke Hagino in the 400 IM or Kyle Chalmers in the 100 free.

Murphy won both the 100 and 200 backstrokes at the 2016 Olympics and set the world record later in the meet while leading off the medley relay. He remains the world record-holder, but China’s Xu Jiayu has won both World Championships golds since then (2017 and 2019). 55.6% of voters, though, still favored Murphy over the other athletes in our poll.

Hagino won the 400 IM by seven tenths of a second in 2016. But in 2017, he fell to 6th at Worlds. He took a hiatus from the sport in 2019, but looked very good in short course meters in the International Swimming League this past fall. Hagino, at this point, isn’t even scheduled to swim the 400 IM in Tokyo, but it’s still conceivable that Olympic lineups could change. Hagino got 28.4% of the vote.

Chalmers won the 100 free at the 2016 Olympics with a historic second-50 split. He withdrew from 2017 Worlds after having heart surgery, but roared back in 2018 to beat Caeleb Dressel for Pan Pacs gold. Dressel’s presence, though, was a big deterrent to Chalmers in this poll. Dressel won gold at 2019 Worlds by a tenth over Chalmers, and has looked incredible in the International Swimming League. Chalmers got just 16% of the vote in our poll.

Below, vote in our new A3 Performance Poll, which asks voters a similar question, but targeted at three women’s events:

100 back field is star-studded, but kind of wide open with no clear favorite. Murphy maybe has more cred as the WR holder, but many guys have more upside than him, and the odd year curse is on again.
Hagino won’t swim 400 IM, I have no idea how he ended up on the poll. (Feel like Horton could have been a good option instead – he’s not safe like the other options, but he still has a reasonable chance.)
Chalmers could defeat Dressel, but he has been recovering from shoulder surgery. Trials will be the indication if he looks like he can beat Dressel. He has been 48.04 this season – not as good as the 47s… Read more »

Chalmers has a VERY good shot to repeat. Dressel is amazing, but this is by far the event he has the closest competition with, Chalmers knows he needs to have a better start to beat Dressel, and has probably been working at it like a madman these last 2 years. With only a .12 gap between them, it’ll be a battle for sure.

I think Chalmers needs to be out around 22.5 or faster if he’s gonna beat dressel and he definitely needs his 24.3 ish back half as well. Dressel is probably gonna be 22 low- 24 mid to high but we also haven’t really seen where he is long course since 2019 and he’s improved a ton in SCM. They have both shown they can swim their fastest in the final at major meets so seeing two 46’s in the 100 free final could be a very real possibility.

Hagino won’t swim 400 IM in Tokyo. Seto and Ikrai were selected for this event. However he still got more votes than Chalmers 100 free? lol.

Is Hagino even swimming 4im?

Exactly why would anyone vote for someone who isn’t going to race that event?

Lemme guess, the votes came predominantly from the US…

Chalmers won the gold in Rio by powering home past Adrian and the rest of the field in the final 25 meters.

He almost caught Dressel at the WCs. He knows he needs a 46 to repeat as Olympic champion.

At the least, I think Chalmers is more likely to beat out Dressel than Murphy is to beat all of Xu, Rylov and Kolesnikov.

If it upsets you so much enlist some foreign voters.