Stephanie Balduccini Wins 100 Breast to Complete “the Cycle” in Brazil 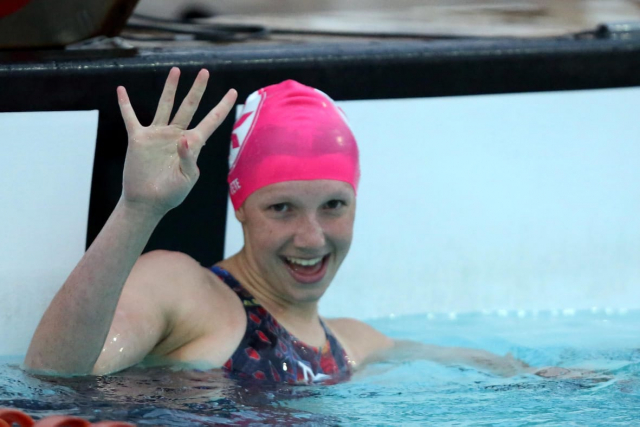 At the 2019 Brazilian 15-16 interclub championships, Stephanie Balduccini won the 100 breast, 100 fly, 100 back, and 100 free in her age group. Current photo via Ricardo Sodré da SSPress/CBDA

Stephan Steverink finished his meet at the Brazilian 15-16 Summer Interclub Championships with another Championship Record, with this one coming in the 15-year olds’ 400 free. There he swam a 3:57.03 for another easy win, by almost 9 seconds. Unlike in 5 other swims at this meet, however, he didn’t set the national age record, with that remaining in a 3:56.06 by Fransico Gustavo a year ago.

Steverink was the story of the meet all week long, but on the meet’s final day, a different swimmer stole a little bit of his thunder. Stephanie Balduccini finished her meet with 7 wins in 9 races in the Juvenil1 (15-year olds) age group. On Sunday, she won the 100 breaststroke in 1:14.62, which gave her wins in the 100 breast, 100 back, 100 fly, and 100 freestyle. In the 100 fly, especially, she twice broke the Meet and National Records for her age, swimming 1:00.58. She broke the National Record in the 100 free too, swimming 56.00. That time could put her already on a path for a Tokyo relay for Brazil, even at only 15-years old.

Her effort helped carry her Paineiras squad to a runaway team title in the Juvenil1 category, by 218 points ahead of runners-up SESI. Curitibano won the Juvenil2 category.

The other big swim of the final day of competition came in the Juvenil2 (16-year olds) 100 breaststroke, where in the boys’ race Raphael Windmuller swam a 1:02.41 in the 100 breaststroke.