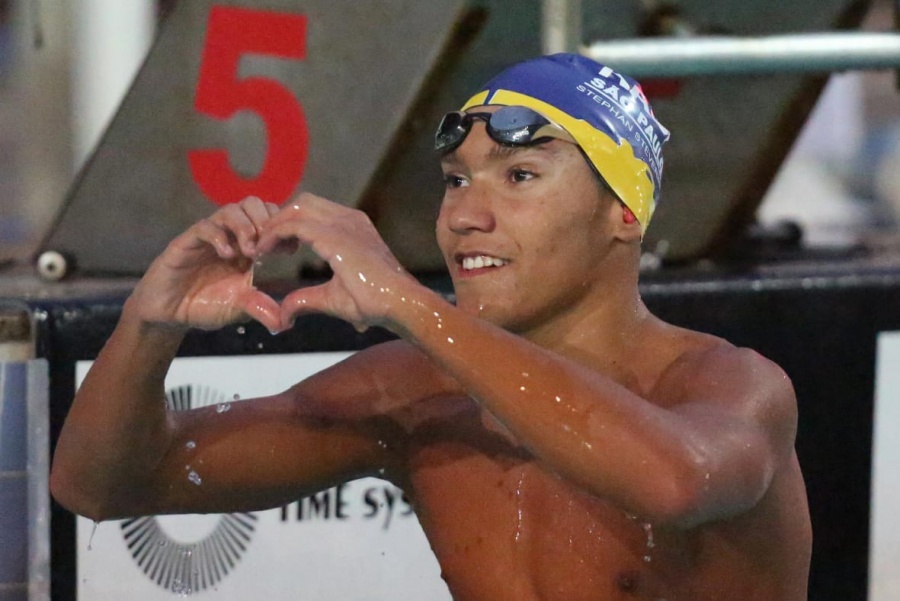 15-year old Stephan Alexander Steverink has put in another show-stopping swim at the Brazilian 15-16 age group championships. Swimming in the Juvenile 1 category, for 15-year old swimmers (born in the year 2004), Steverink posted a 4:21.35 in the 400 IM on Thursday. That breaks the Brazilian National and Championship Records for his age in the event, and won the meet title by nearly 30 seconds.

While not quite a Phelpsian effort, who is the gold standard globally in the 400 IM, having swum 4:15.20 at 16-years old, it is one of the world’s fastest times at that age in that event. For perspective, Carson Foster was a 4:21 at 15 years old, as was Andrew Seliskar.

The swim came as a follow-up to a 15:26.77 in the 1500 free swum earlier in the meet by Steverink. The 400 IM swim was the less-surprising result of the two, given that up until this week his best performances had been as a breaststroker. Steverink showed that skill off as well on Wednesday, when he set a new age record in the 200 breaststroke in 2:18.44.

“I did not expect this record, because in the morning I did not pace my swim very well,” Steverink said. “In the final, though, I managed to improve and beat the record. I don’t think there’s any word other than pride. I am very proud of the work that I’ve done.”

Other Noteworthy and Record-Breaking Performances on Days 2 and 3:

And he still have the 200 IM at night.. which he will probably break the Age Group Record and the 400 free tomorrow..

Well… it was Michael Pehlps. He already had an Olympic final and a World Record in the 200 fly under his belt by that time.

Has he declared a sporting citizenship yet? When would he have to do that?

Not sure if he has. Wouldn’t have to do that until he wanted to represent a country at an international FINA-sanctioned event.

He has a lot of improvement room specially on Back