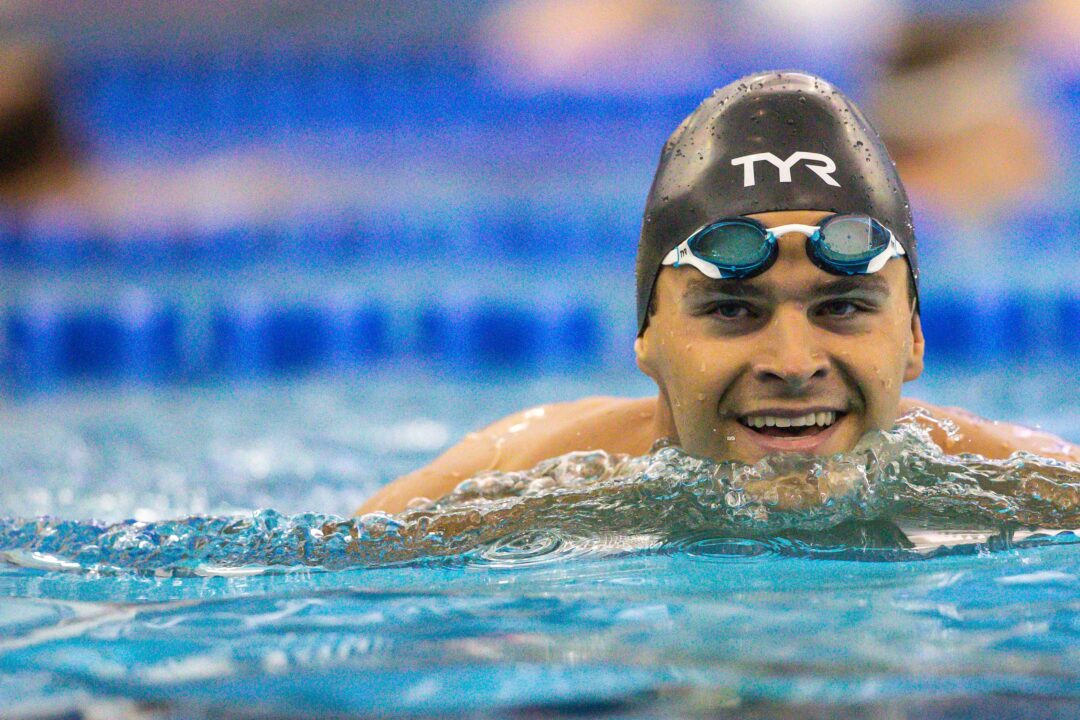 Michael Andrew is one of many U.S. Olympic medalists set to join the final leg of the FINA World Cup series in Indianapolis. Archive photo via Jack Spitser/Spitser Photography

The third and final leg of the 2022 FINA World Cup series is set to kick off on Thursday from the Indiana University Natatorium in Indianapolis, and a loaded group of American swimmers will be joining the fray.

Some of the nation’s best will join the circuit to race on home soil in what will be the first FINA World Cup event held in the United States since 2006.

The majority of U.S. names we saw last weekend will be back, headlined by world record-setter Katie Ledecky, Toronto points winner Shaine Casas and Olympic gold medalist Lilly King. Beata Nelson, who is currently leading the women’s standings in the race for the overall title, will be racing as well.

Some of the new names joining the mix on the women’s side include rising stars Katie Grimes, Bella Sims and Claire Weinstein out of the Sandpipers of Nevada, Olympic medalists Leah Smith and Abbey Weitzeil, and 2022 World Championship bronze medalist Leah Hayes.

The men’s side includes the addition of names such as Michael Andrew, Ryan Murphy, Bobby Finke, Hunter Armstrong, Luca Urlando, Drew Kibler, Tom Shields and Cody Miller. Shields raced at the opening leg in Berlin but wasn’t in Toronto.

Other key names to watch for will be age group superstars, 12-year-old Mikayla Tan and 15-year-old Thomas Heilman.

Beyond the American names, two key international swimmers joining the series for the first time in Indianapolis will be Duncan Scott and Ahmed Hafnaoui.

Hafnaoui, the Tokyo 2020 Olympic champion in the men’s 400 freestyle, is no surprise to be racing in Indy, having joined Indiana University this past fall, though he was ruled out of racing in the 2022-23 NCAA season.

Scott is a much more surprising addition, as he hasn’t contested in either of the first two stops and is primarily based out of Great Britain.

The new additions will add some more intrigue to all of the races in Indy, but here are a few key ones to keep an eye on.

South Africa’s Matt Sates is chasing the ‘triple crown’ title in the men’s 400 free in Indianapolis, with the opportunity to earn an extra $10,000 for winning the same event at all three stops of the series.

While he still has to be considered the favorite to do so, his path to victory got a bit more difficult with some of the additions to the start list.

Sates got the better of American Kieran Smith by around one second in each of the first two stops for the win, but this time he’ll also have to contend with Duncan Scott and Ahmed Hafnaoui. While we’re not sure exactly where they’re at in terms of their form coming in, both men have the capability to pull off the win, and at the very least, pose a real challenge to Sates.

We were treated to a pair of incredible races in Toronto in the women’s distance freestyle events—Summer McIntosh and Katie Ledecky had an epic duel in the 400 free, and Ledecky absolutely smashed the world record by nearly 10 seconds in the 1500 free.

In Indy, there won’t be a 1500 raced for the women (except for this one), and McIntosh isn’t entered in the 400 free. However, Ledecky and McIntosh will lock horns in the 800 free.

The race brings excitement for a number of reasons, the first one being an almost certain world record for Ledecky after she came close to breaking it to the feet during her 1500 swim last weekend.

McIntosh isn’t expected to challenge Ledecky in this race (though she’s constantly been exceeding expectations), but the intriguing battle on the horizon for the Canadian is with fellow teenage standout Katie Grimes.

McIntosh and Grimes had a head-to-head battle in the 400 IM at last summer’s World Championships, and will do so again in the 800 in Indy. The event presents a unique opportunity for both swimmers to do something special while chasing the greatest distance freestyler in history, Ledecky.

Shaine Casas is the man to beat in the men’s 100 back, having placed first in Berlin and Toronto, including setting a new World Cup Record and becoming the third-fastest swimmer in history last weekend (48.84).

It won’t be easy to go three-for-three, however, as he’ll face off against Thomas Ceccon, Hunter Armstrong and Ryan Murphy, the entire 100 back podium from the 2022 World Championships in the event, plus the fastest swimmer ever in short course yards, Luca Urlando.

They’ll join the likes of SCM world record holder Coleman Stewart, Poland’s Kacper Stokowski, Canada’s Javier Acevedo and 50 back LC world champion Justin Ress, who all battled Casas in Toronto. (Ceccon raced the 100 back in Berlin and placed second, but didn’t race it in Toronto.)

If we’re looking at races that will look different than they had in the previous two legs, the women’s 200 fly stands out as we’ll see reigning LC world champion Summer McIntosh tackle the event for the first time this season.

Americans Hali Flickinger and Katie Grimes should also be quick in this race, and Swedish sprinter Louise Hansson is also lurking down on the psych sheets coming off an incredible 100 fly performance in Toronto.

Shaine Casas lit the pool on fire in Toronto, coming within three-tenths of Ryan Lochte‘s 200 IM world record in a time of 1:50.37.

While he might just dominate once again, the addition of Duncan Scott to the field could make this race a close one, and we also can’t discount Matt Sates, who won the opening leg in Berlin in a time of 1:51.64.

The field will not feature American Michael Andrew, though he will factor into the 100 IM which should be an exciting event as well. Andrew is also notably entered in the 200 breast, an ‘off’ event for him that could be used a good endurance test.

Bobby Finke should adapt well to SCM. He has excellent turns.

Izzy Ivey is entered in a bunch of events. I wonder if she’s using this as a test to see if bouncing on another NCAA eligibility and making money on the World Cup circuit is a better idea.

This could be a more awesomer weekend then last! Fingers crossed

Club. It means they’re entered under the banner of their club team, not their country.

There are a number of non US swimmers repping US clubs.

W200FR can be of some interest as well since Haughey is not in her best form now, Ledecky wouldn’t have a double in this session and there are two American young this season surprises in 200FR LCM. It would be also interesting to check the McIntosh’s progress in this event.

actually, Ledecky would have the 4IM at the beginning of her session if she doesn’t scratch it

No Marchand? I feel a bit let down.

Why aren’t any of asu pros there? Only Hali and she isn’t aaas good in short course!

Do we know if he’s going to Worlds? Since Duncan and Kalisz aren’t, if Marchand doesn’t that means 2IM and 4IM will be missing 3 of the top 5 swimmers from this year.

That 100 back is stacked

Totally! One can’t afford to be sleepy for prelims!

Are There any time standards to enter into this meet? How does one enter into a World Cup if you are a club swimmer?

It makes Haughey’s chances for 100K almost zero. But still a chance.
This season World Cup when it got moved from Asia is becoming quite an exciting competition.

Haughey already had a pretty low chance. Assuming Nelson wins 3 events (which she probably will), Haughey wouldn’t have been able to catch up anyway. But now Haughey is likely to only win two, or maybe even one.