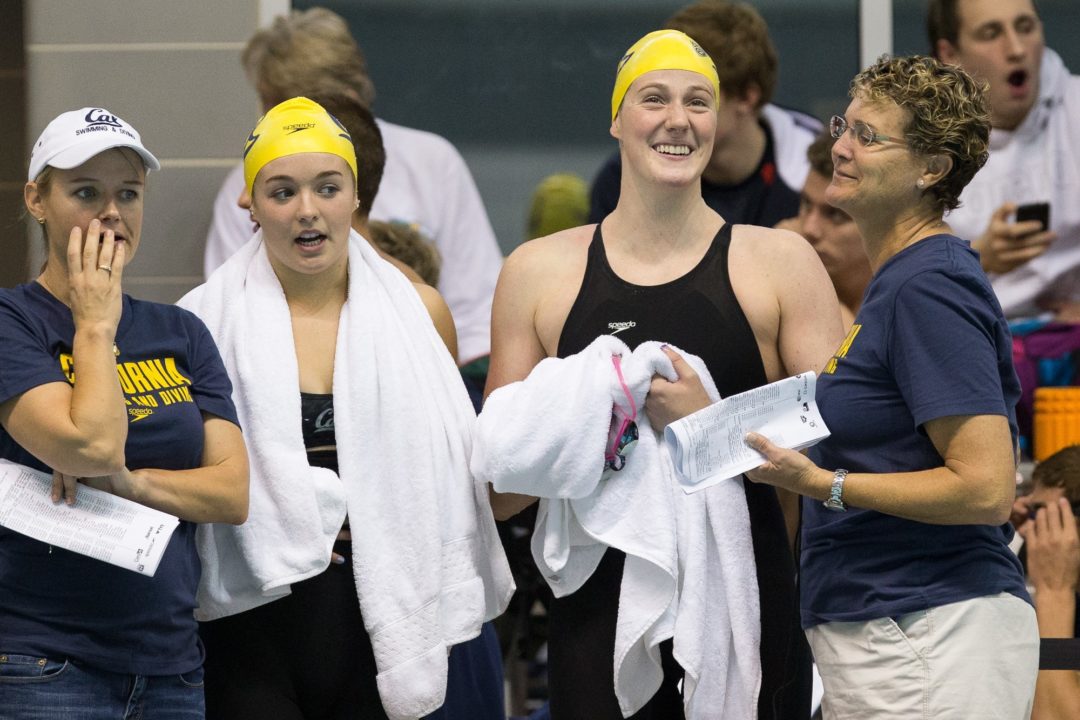 Missy Franklin won 3 events, but Stanford swam away with a decisive victory less than 2 weeks out of the Pac-12 Championships. Archive photo via Tim Binning/TheSwimPictures.com

While nobody lit the pool on fire with any incredibly fast times, the California Golden Bears and Stanford Cardinal gave the fans at Stanford’s Avery Aquatics Center plenty to cheer about. And cheer they did.

On a gloomy – by Palo Alto standards – Saturday morning, the fans showed up in droves to see their hometown team race their cross-bay rivals, cheer on fan favorite Missy Franklin, and help raise money for the Lucile Packard Children’s Hospital. Cal and Stanford fans alike packed the stadium and electrified the atmosphere with their roars. There may not have been any conference-leading times posted, but there were plenty of great races that came down to the touch.

The Cardinal kept within striking distance of the Bears through the first 5 events before taking the lead – after Maya DiRado‘s narrow victory in the 200 butterfly – and never looking back. Last year, the Bears swam away with a hard-fought and nail-biting 9-point victory, 154.5-145.5, but this year the Cardinal held off the Bears with solid performances across the board.

1000 Freestyle
The morning began with diving and the women’s 1000 freestyle taking place before the Pac-12 Networks TV broadcast began at 10am. If Missy Franklin swimming the 1000 doesn’t get the event covered live, I’m not sure what will. But even though the 1000 didn’t make it into the live broadcast, there were plenty of fans ready to make some noise for their favorite Olympian. Through the 600 mark, Cal’s Franklin and Catherine Breed as well as Stanford’s Andie Taylor and Allison Brown stayed together holding a very relaxed 30 seconds per 50 – and that’s when Taylor began edging away from the field. Franklin appeared to be waiting to make a breakaway and, with the bell lap approaching, turned on her legs to pass Taylor and break away from the field at the 750. Negative splitting her 500s by about 7 seconds, Franklin touched 4 seconds ahead of Taylor, 9:53.81 to 9:58.02. Cal’s Catherine Breed held off teammate Melanie Klaren for 3rd place in 10:06.18.

Stanford junior Fiona Majeau, however, stole the show as she attempted a double that, as far as this writer is aware, no one has ever pulled off. Majeau finished her 1000, put on her parka, and no more than a few minutes later, sang a gorgeous (and not at all noticeably out-of-breath) Star-Spangled Banner for the standing-room-only crowd.

200 Medley Relay
The caliber of sprint backstroking between these two teams is mind-boggling. [see 100 backstroke] Cal’s A and B relay leadoffs (seniors Cindy Tran and Stephanie Au, respectively) touched virtually even with Stanford senior Felicia Lee after backstroke, before Katie Olsen pulled Stanford ahead as the only breaststroker to split under 28 seconds. Cal’s Farida Osman responded with a swift 23.74 butterfly split, putting the Bears .17 ahead of the Cardinal going into freestyle. Amidst a crowd going nuts, Stanford’s junior sprint standout Maddy Schaefer dipped below 22 seconds to pass Cal anchor Kaylin Bing (who had a solid 22.31 anchor split herself) and set the tone for the rest of the meet.

200 Freestyle
Missy Franklin practically brought the crowd to its feet before she even stepped up on the blocks; the Cardinal-dominated crowd roared their support when her name was announced before the race. And she didn’t disappoint – she had more than a second lead at the 100 over her Olympic teammate, Cardinal Lia Neal. Franklin appeared to coast through her final 100 to what looked like an easy 1:45.46 (which, yes, smells like an oxymoron), finishing 2 seconds ahead of Neal’s 1:47.52. Cal’s Caroline Piehl was third in 1:48.13. After this event, Cal enjoyed their largest margin of the morning with a 34-21 lead over the Cardinal.

Notably, all 7 ladies in the event were 55.82 or faster: an impressively deep field.

100 Breaststroke
Stanford’s Katie Olsen followed up her medley relay performance with a convincing win over teammate Sarah Haase, 1:00.56 – 1:01.95. With only 5 swimmers in the event, Cal took the final 3 spots, and Stanford’s 1-2 brought them within 3 points of the Bears, 48-45.

100 Freestyle
This race brought the crowd to its feet, and for good reason. It was a fight to the very end, as Franklin, Neal, and Schaefer were neck and neck until Franklin seemed to will her way to the wall ahead of her Cardinal competitors. Franklin’s 48.99 eclipsed Neal and Schaefer, who touched in 49.11 and 49.16, respectively.

Also of note here is Stanford post-grad Andie Murez‘ exhibition 100 freestyle. Swimming alone during one of the breaks, Murez touched in what looked like a really easy 48.5.

3M Diving
Phipps, the Stanford senior, came out on top on the 3M springboard event with a score of 323.25, reversing the finish order from the 1M event. Kastler was second with a 299.40, eclipsing Stanford’s Alexandra Clay‘s score of 289.13.

200 Backstroke
It’s unfair to say that Liz Pelton looked like she was taking a nap throughout this event, but I’ve never seen a 1:55.35 200 backstroke look so easy. With that kind of turnover, most swimmers would sink to the bottom of the pool – not so with Pelton, who easily took the event over Stanford’s Annemarie Thayer‘s 1:58.28 and teammate Kelly Naze‘s 1:59.09.

200 Breaststroke
Olsen and Haase were back at it for the Stanford breaststroke crew and shooting for another 1-2 finish, but Cal’s Celina Li made them work for it. Olsen pulled away early to finish with a smooth and swift 2:11.23. The battle was for second place. After a narrow defeat in the 200 fly, Li looked hungry to come out on top – but it was Haase who got her hands to the wall first, 2:15.43 to 2:15.47.

500 freestyle
Taylor, DiRado, and Breed swam together for the first 250 yards before the Cardinal teammates simultaneously pulled away from the Breed, swimming in the lane between them. Taylor made a move to pull away at the 350, gaining just enough ground over DiRado to touch the wall first at the 500, 4:49.06 to 4:49.51. Breed ended up 3rd in 4:54.09 after dropping off the pace set in the first half of the race.

100 Butterfly
Felicia Lee didn’t get the memo that she didn’t need to swim any extraordinarily fast times to come out with first place points – but that was just fine by the crowd, which delighted in her decisive 1.5 second victory over Cal’s freshman Sophia Batchelor and senior Cindy Tran. Lee touched in a very fast 52.74, and her first place points resulted in a 17-point margin for the Cardinal leading into the final 2 events.

200 IM
In Celina Li’s last individual event, you couldn’t help but cheer for the swimmer who had been touched out in her prior two events by a collective .29. The crowd, though, was solidly behind Cardinal fan favorite Maya DiRado, who held onto her lead down the home stretch to a hard-charging Li to finish in 1:57.62 to Li’s 1:57.96. Pelton took 3rd in 1:59.74 with a surprisingly casual 30.73 backstroke split, over a second slower than any of her 50s during her 200 backstroke several events earlier.

400 Freestyle Relay
With victory already assured for the Cardinal, both teams used this opportunity to get up and race. The fans were excited for the final leg, which pitted Cal’s Missy Franklin against Stanford’s Lia Neal. Franklin entered the water just over a second behind Neal, and they split identical 48.64s en route to finishing the anchor legs.

With Stanford’s B relay narrowly edging Cal’s B relay, 3:24.68 to 3:24.79, the Cardinal put the exclamation point on their victorious performance, adding to their final score of 167 to the Bears’ 133.

Stanford Head Coach Greg Meehan was proud of his team’s performance, particularly the seniors on their “Senior Day,” but admitted that “it wasn’t pretty, in a lot of senses.” Meehan explained that “both teams are struggling through some fatigue as we gear up towards the end of the season,” but he liked that his swimmers put their heads down, had really good finishes to their races, and won a couple of touchouts. “Cal’s a great team, and their lineup’s littered with just wonderful athletes,” he added.

I caught up with Celina Li, the Cal Bear on the other end of said touchouts on this particular day, and she was bullish about championship season. “I look up to [Maya DiRado] and just being able to race her and keep with her, it’s really inspiring, and it gets me really pumped up for Pac 12s and NCAAs,” she said of her 2 close races with DiRado today. The Cal-Stanford rivalry lived up to its bidding for her. “This dual meet, by far, was the most intense out of all of them,” she said. “Just the energy from the crowd and our teammates cheering … It was a lot of electricity, I could feel it in the air.”

Cal Head Coach Teri McKeever remembered when she first started coaching and the Cal-Stanford rivalry wasn’t what it is today, just because of the team mismatch in the days of Stanford national dominance. As she’s developed her program to universal renown, she enjoys the opportunity to race her cross-bay rivals heading into championship season. “A lot of these girls who grew up in the area remember watching this meet and dreaming of being part of it someday,” she said. “This is a really special meet for them.” McKeever was quick to praise her team for their performances, despite “definitely [being] a little tired coming into the meet.”

Avery Aquatics Center will play host next week to the men’s edition of the Cal/Stanford rivalry swim meet – diving and distance will again happen before the “official” start to the meet at 11am.

I wonder where have Marina Garcia and Rachel Boostma gone

Yes, Bobo, all were in training suits – and certainly there were some very impressive times, but in years past this meet has produced some downright miraculous times. It just speaks to the fact that this dual meet win has far less importance to either team now than it may have in prior years. When I swam, we certainly weren’t “really tired” going into the Cal meet!

I watched the meet on the Pac-12 Network, and this is very nice summary of the meet. It captures all the important details, with a number of other interesting observations. Hope you’ll be doing the same for the men’s meet next week.

That’s an impressive double: The 1000 and the National Anthem. As a singer, I know that the anthem is a deceptively tough tune on it’s own without a strenuous swim before it. All I can say is that there must have been a lot of good oxygenated blood rushing through the arteries of her larynx, so that bodes well for her level of conditioning!