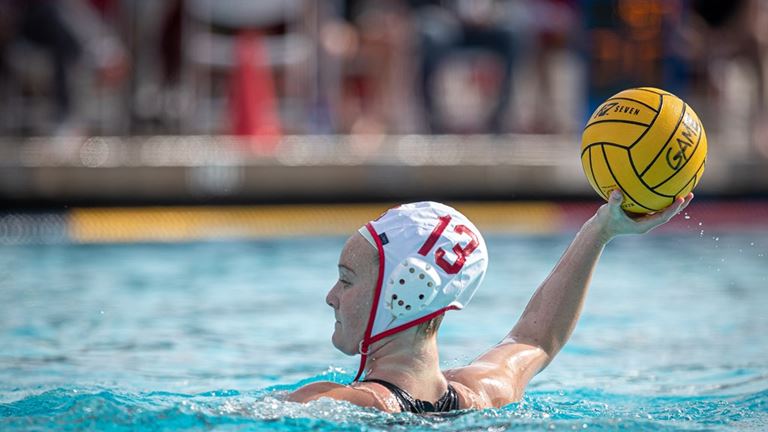 A week out of the water did not stop Stanford from assuming the #1 spot in the collegiate women's water polo association Top 25 poll. Current photo via Stanford Athletics

The Cardinal, which last played on Feb. 2, moved up a spot to top the poll after then-#1 USC fell to #3 UCLA in the championship match of the Triton Invitational on Sunday. Stanford returns to action on Saturday at the Aggie Classic in Davis, California.

Hawaii, USC and Arizona State round out the Top 5. The Rainbow Wahine moved up one position into a tie for #3 with USC despite having the weekend off, while the Sun Devils climbed three places from #8 to #5 after a 3-1 effort at the Triton Invitational.

Wagner also moved up three spots from #20 to #17 with a 4-0 performance at the Bison Invitational. The Seahawks upset #15 Harvard 12-8 and downed St. Francis Brooklyn 16-5, #23 Bucknell 17-8 and Mercyhurst 17-3. Malia Josephson dropped in six goals against both Harvard and Bucknell to lead the Wagner attack.

UC Davis dropped five spots from #9 to #14 after splitting its four matches at the Triton Invitational. The Aggies fell to Indiana 12-11 in sudden death, then bounced back with a 14-8 win over Pomona-Pitzer and a 9-7 victory over #22 Cal State Northridge before falling to #16 Loyola Marymount 8-7 to end the weekend. Chloe Robinson scored a team-leading six times in the loss to Indiana and added four goals alongside Noelle Wijnbelt against Cal State Northridge.

Princeton fell four spots from #17 to #21 despite a weekend off. The Tigers (2-2) return to action at home this weekend, hosting Wagner, San Diego State and Long Island Brooklyn on Saturday and Sunday.

Azusa Pacific dropped out of the Top 25 into the ranks of the vote getters despite not playing on Week 4.

Salem, George Washington and Santa Clara each were mentioned among the vote getters after Week 4 play.