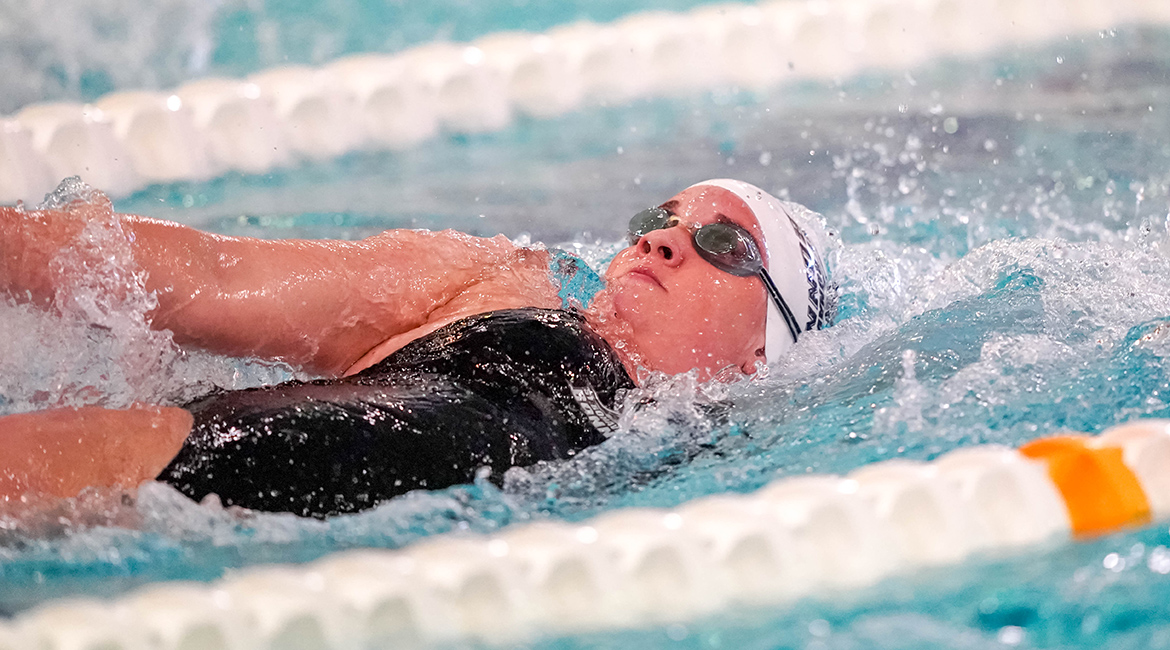 HAMILTON, N.Y. – The St. Bonaventure men’s swimming and diving team cruised to its first victory of the season at the Justin Jennings Memorial Invite at Colgate, winning every event along the way.

On Friday, seniors Hylton Collinson and David Shakhnazarov led the way by earning two individual victories each. Collinson finished first in the 400-IM with a time of 4:10.92 and took first place in the 100-breaststroke with a time of 59.31. Shakhnazarov took first in the 200-freestyle, touching the pad in 1:44.75, and also won the 50-freestyle (21.69).

Junior Tjaard Krusch had another strong showing in day one of the meet, leading a pack of Bonnies in the 400-medley relay with his time of 3:31.50. He was followed by Collinson, Guido Balderrama, and Nick Burdo. Krusch also brought home first place in the 100-backstroke with a time of 51.10.

In the 1650-freestyle, freshman Elias Petri earned his first individual victory, touching the wall in 16:43.36. Tomas Botero took second place with a time of 17:18.74.

Bona swept all three podium positions in the 3-meter dive as well.

Freshman Austin Campbell brought home his first victory in the event by earning 231.20 points, ahead of teammates Michael Bruno (219.80) and Jamoni Wise (207.95) in second and third.

Shakhnazarov had a strong second day of competition as well, taking first place in the 100-freestyle with a time of 47.79. Shakhnazarov’s teammates took the next six spots behind him in the same event.

Bona dominated on the 1-meter board once again, taking the top three spots. Campbell came away with first place, earning 255.22 points. Bruno came in second with 246.90 points, and Wise finished third with 241.12 points.

The Bonnies are off until Saturday, Nov. 2 when they will head to Geneva, Ohio for the Atlantic 10 Invitational, hosted by the Spire Institute.

For the weekend, the Bonnies triumphed in 15 of 16 events.

Winning multiple events for the Brown and White on Friday were junior Katrina Wardner and sophomore Rachel Kimmel. Wardner was the winner of the 200-freestyle, clocking in at 1:56.38, as well as the 200-butterfly, finishing in 2:09.49. Kimmel used a time of 4:36.23 to win the 400-IM and followed that up by winning the 100-breaststroke, touching the wall in 1:04.31.

The 400-medley relay team consisting of Kimmel, Wardner, Janssen and Zanre Oberholzer grabbed triumphed as well, ringing in at 3:57.84.

Also winning individual events for the Brown and White was  Oberholzer, Kimmel, Schaef and Izzy Aguilera.

In the 400-freestyle relay, the winning team of Janssen, Hayley Tasselmyer, Kimmel and Wardner clocked in at 3:39.81.

The Bonnies are back in action Nov. 4-5 at the Atlantic 10 Invitational. That meet will take place at the Spire Institute in Geneva, Ohio.

The Raiders finished third in the team scoring against Le Moyne and St. Bonaventure with a mark of 110 points.

On Friday, Noah Zeigler was the biggest contributor, thanks to his effort in the 1650 Yard Free. He completed the long event in 17:34.93 to pick up third place, which was the highest individual finish of the day for the Raiders.

Koch also had a top-5 finish in the 100 Yard Backstroke. He touched the wall in 54.52 for fourth place. Justin Song had the final top-5 individual mark of the day for the Raiders when he swam the 200 Yard Fly in 2:04.35 for fifth.

The relay team of Koch, Song, Segundo Rienhardt and Jack Van Meter also claimed a top-5 finish when they were fifth in the 400 Yard Medley relay with their time of 3:45.15.

The group of Koch, Rienhardt, Song and Van Meter also claimed fifth in the 400 Yard Free Relay with a final time of 3:21.26.

The Raiders finished the event with 207 team points to claim second against the likes of St. Bonaventure and Le Moyne.

Beth Caruana hit the wall first in the 100 Yard Backstroke Friday afternoon in day one of the third annual Justin Jennings Memorial Invitational at Lineberry Natatorium.

She claimed top marks in the event when she got to the wall in 59.63. It was the top performance of the day for the Raiders, who sit in second place with 108 points heading into the second and final day.

Elsewhere for Colgate, Katie Hand continued the strong start to her rookie campaign. She had a pair of second place individual finishes, including a time of 1:57.72 in the 200 Yard Free. She was also second in the 200 Yard Fly when she touched the wall in 2:10.36.

The relay team of Hand, Carolyn Silverman, Lauren deTorres and Madison Sullivan finished second in the 400 Yard Medley Relay with their time of 4:06.01.

A pair of individual top-3 performances lifted the Raiders as well. Kiersten Daly was third in the 400 Yard IM thanks to her time of 4:45.11. deTorres also picked up third place marks in the 100 Yard Breaststroke with her time of 1:08.96.

deTorres had strong performances in the second and final day to lead the Raiders. She finished third in the 200 Yard Breaststroke with her time of 2:30.17. She also came in fourth for her second individual top-5 of the day in the 200 Yard IM with a mark of 2:15.27. Hand came in just ahead of her in third with a time of 2:13.45.

deTorres and Hand also teamed with Emma Stewart and Madison Sullivan in the 400 Yard Free Relay for a 2nd place finish in 3:43.83.

After Caruana won an event Friday, she had another top finish in day two when she claimed second in the 500 Yard Free. She touched the wall in 5:27.84.

Caroline Osman also had a top-5 time when she touched the wall in 2:17.02 for fourth in the 200 Yard Backstroke.

From the Source
Mark S. Randall Head Swimming and Diving Coach Ed Pretre
“Our team has come a long way and have improved over the last six weeks tremendously,” said Pretre. “We are very pleased with our start and feel like we are ahead of where we need to be. We are excited to tackle the next month of training to work on the little things that are going to make us much better as the season goes along.”

Up Next
The Raiders are away from competition until Nov. 2 when they host Niagara at Lineberry Natatorium. Start time is set for 1 p.m.