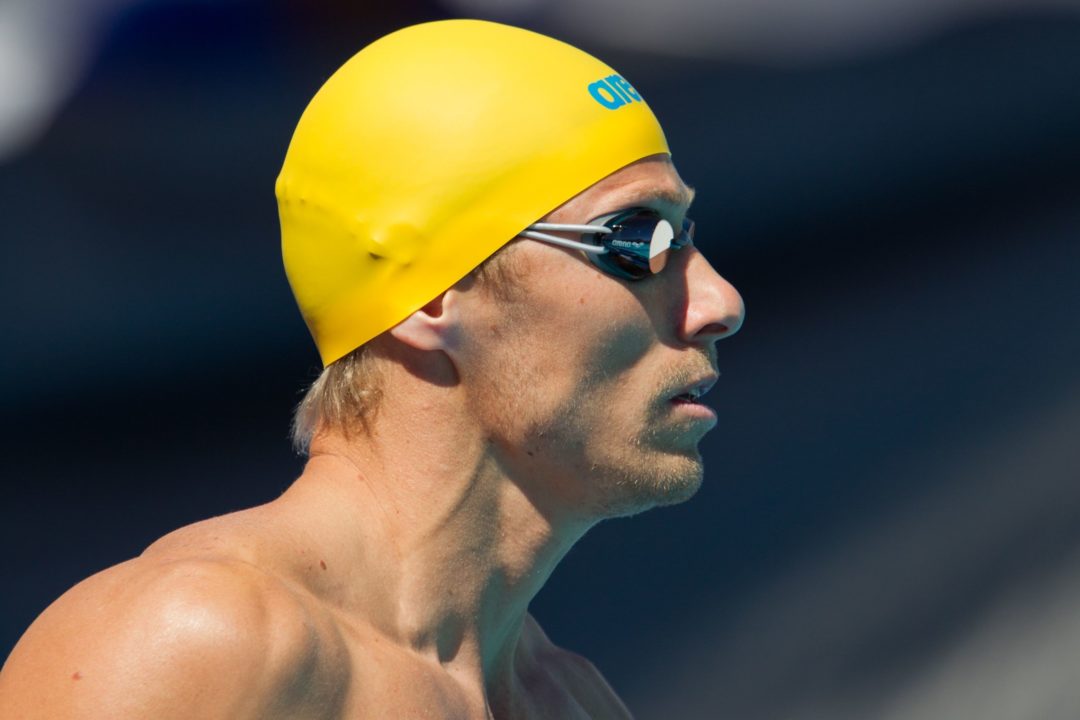 Check out what South African swimmers need to do to qualify for Tokyo, including how now-banned Roland Schoeman could potentially still be in the mix. Archive photo via Tim Binning/TheSwimPictures.com

While we’ve seen virtually every nation publish its 2020 Olympic Games selection criteria well in advance of the qualifying period, the nation of South Africa has only recently revealed its long-awaited policy.

In reviewing the document, there isn’t anything too out of the ordinary in terms of qualification. To be eligible for selection, an athlete must participate at the South African National Swimming Championships slated for April 4th – 9th in Durban.

Of the athletes competing there, only the top 2 finishers in an Olympic individual event who attain a FINA ‘A’ Olympic qualifying time will be considered for selection, pending final approval by the South African Sports Confederation and Olympic Committee (SASCOC).

Should one or both of the top 2 finishers not achieve an ‘A’ time, then an athlete with the fastest ‘A’ time in either a heat or semi-final of that event will be considered, provided they swim in the final of that event.

Additionally, should there not be 2 athletes with ‘A’ Olympic qualifying times achieved for a specific Olympic event at the end of the aforementioned Championships, then athletes who have achieved an ‘A’ time at any FINA approved meet between March 1, 2019, and June 29, 2020, will be considered for selection.

That caveat potentially holds particular significance when examining the case of now-banned swimmer Roland Schoeman. As reported on February 6th, the 39-year-old had tested positive for banned substance GW501516 in May of 2019, a drug obtained on the black market and considered to be a cancer risk. The World Anti-Doping Agency categorizes GW501516 as a ‘hormone and metabolic modulator’, alerting athletes in 2013 that the substance failed medical trials and was a toxic threat to health if used as a performance enhancer.

Schoeman was handed a one-year ban, which ends on May 17th of this year. Although that’s after the South African Championships in April, it leaves him enough room to shoot for an ‘A’ Olympic qualifying cut before the secondary June 29th deadline, assuming there aren’t already 2 swimmers to have qualified outright from that meet. This ‘loophole’ would also assume he’d be able to still be eligible for selection having been under suspension during April’s national championships.

We’ve reached out to Schoeman to understand his plan for qualification if he indeed is still pursuing competing at the 2020 Olympic Games. At the 2019 Sette Colli Trophy, the Olympic veteran swam 22.7 in the 50 free, 49.9 in the 100 free, and 23.8 in the 50 fly. The FINA ‘A’ Olympic qualification time for his most-likely-to-attain event of the 50m free sits at a stiff 22.01.

In terms of FINA-approved OLY qualification meets, however, there would still be a handful at which he could compete between the May 17th suspension relief date and the June 29th qualification end date, including Mare Nostrum stops in Monaco (June 6th-7th) and Canet (June 13-14th).

“To be eligible for selection, an athlete must participate at the South African National Swimming Championships slated for April 4th – 9th in Durban.”……I thought that part would make him ineligible, even with the caveat. I understand it to mean to be considered for selection at all you have to attend trials, and as we know he won’t be able to with the ban. So even if he achieves an A time before 29 June, the fact that he did not attend trials makes him ineligible for selection?

ThatGuy – That is the question and why I have ‘loophole’ in quotes—> This ‘loophole’ would also assume he’d be able to still be eligible for selection having been under suspension during April’s national championships.

Gee that’s lucky. Would be a real shame if a drug cheat was punished for his actions.

https://swimswam.com/cas-finds-brazils-gabriel-santos-without-fault-revokes-1-year-suspension/
Since cross contamination is a real and valid issue, as he claims happened (did you read his statement?), why don’t we wait for the processes put in place to deal with this to do their job instead of being arm chair juries.

I don’t buy the cross contamination tainted supplements at all. I know of one 100% false case, and based on what I know I suspect it’s even more common than we realise.

Hopefully he can’t achieve the time and goes straight back into retirement.

And here we thought Olympic qualification was based on times and performances…you must’ve found the hidden section which stipulates age limits too.

Of course! Because my beef with him is his age and not the totally inadequate doping sentence he was given.

Speaking of the Olympics: noted Japanese virologist says that if the Olympics were scheduled to open tomorrow, they wouldn’t be held.
https://abc7ny.com/5946925/

Unfortunately, I doubt things are going to get better in 6 months. OTs may end up being the grand event.

I hope this doesn’t happen. It would be very unfortunate for everyone. Except maybe Joseph Schooling — he would remain defending Olympic 100 fly champion until 2024. Bruce Jenner used to say that the American boycott of the Moscow 1980 Olympics (he won in 1976) was good for his career because no one came along to replace him in the spotlight for an additional four years.