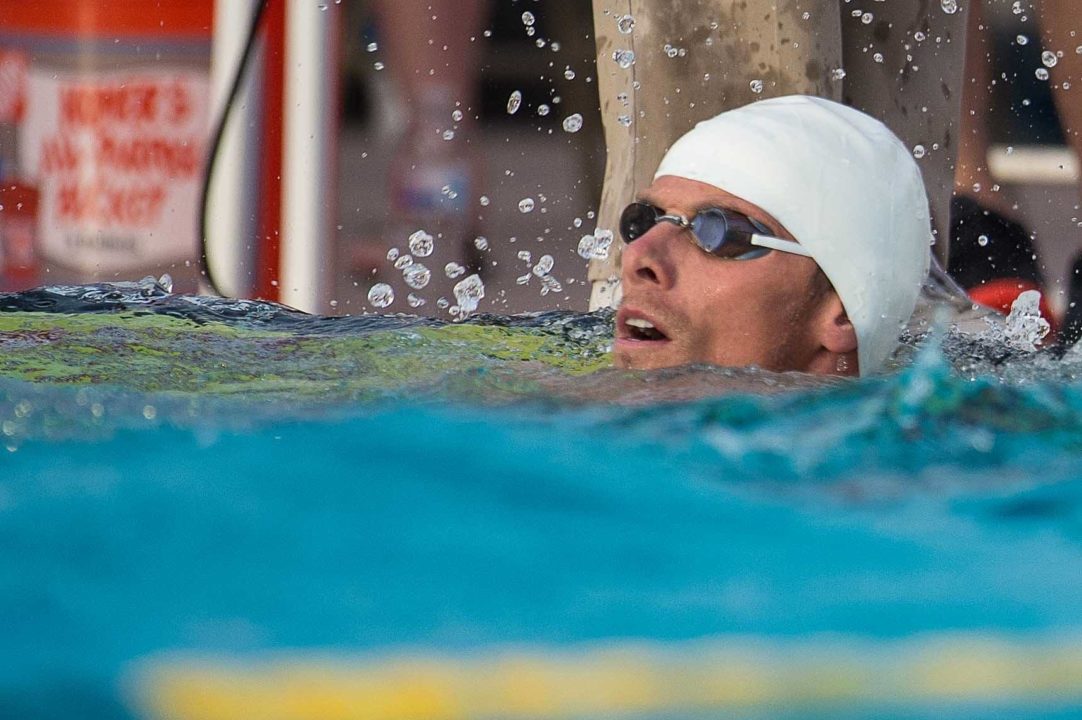 39-year-old South African Olympian Roland Schoeman has been banned for one year after reportedly having tested positive for a banned substance. Archive photo via Mike Lewis/Ola Vista Photography

39-year-old South African Olympian Roland Schoeman has been banned for one year after reportedly having tested positive for a banned substance. We have requested the full FINA Doping Panel decision from FINA, and as of publishing it has not been provided.

Per the FINA ruling, Schoeman tested positive for banned substance GW501516 in May of 2019, a drug obtained on the black market and considered to be a cancer risk. The World Anti-Doping Agency categorizes GW501516 as a ‘hormone and metabolic modulator’, alerting athletes in 2013 that the substance failed medical trials and was a toxic threat to health if used as a performance enhancer. (Washington Post)

We have reached out to Schoeman for comment on this ban, which expires on May 17th, 2020. With the one-year ban having been backdated to the date of his test there is still a chance the veteran could compete in Tokyo as he will be eligible before the Games begin.

As we reported previously, the official Olympic selection policy of South Africa has not been revealed as of yet. An official document does not appear on the organization’s website, nor among those sporting federation selection policies published on the SASCOC site.

He’s the South African record holder in the 50 free in both long and short course meters.

Schoeman was entered in the FINA Swimming World Cup stop in Tokyo, which took place in August of last year, but he was a no-show for all 3 of his races. He did race at 4 meets in Europe in June: the Sette Colli Trophy and all 3 stops of the Mare Nostrum series. At the most recent meet, Sette Colli, he swam 22.7 in the 50 free, 49.9 in the 100 free, and 23.8 in the 50 fly.

Last year racing at Mare Nostrum Series in Monaco, Schoeman told SwimSwam, “The goal for me is to make the Olympic team next year.

“It’s about learning to do what nobody else has done before.”

You can read the full FINA statement here and below:

On 18 May 2019, FINA conducted an out-of-competition doping control test on the swimmer Roland Schoeman (RSA). The athlete was tested positive to the substance GW501516 (Class S.4 Hormone and Metabolic Modulators).

According to the decision of the FINA Doping Panel, Mr. Roland Schoeman has been found to have committed an anti-doping rule violation under FINA DC Rule 2.1 – presence of prohibited substance in an athlete’s sample. He has been sanctioned with a twelve (12) months’ ineligibility period commencing on 18 May 2019, a date fixed by the Panel pursuant to FINA DC 10.11.1, and ending at the conclusion of 17 May 2020, for his first anti-doping rule violation.

According to the Wiki page for this substance: “In 2011, it was reported to cost $1,000 for 10g”. At those prices it’s hard to believe any accidental ingestion

Emm…. Well considering you take about 10mg in one capsule, and prices have dropped a lot since 2011, it is actually quite cheap, cheaper than legal PPARs. Even in 2011, $1000 for 10000000mg or 1000000×10mg is quite a lot. 10mg in of itself is significantly performance enhancing. Most report using 20-30mg at most. These figures that you give are meant to mislead the general public into thinking PEDs are actually expensive. Unfortunately this is not true. Quite a few work out as expensive a month(or only slightly more expensive) as good quality protein powder.

He should have tried visualization instead.

LOL a doping masters swimmer, that’s pathetic. Maybe he was just getting a head start to try and set some 40+ records :). Sadly I know that doping is an issue in other sports for masters athletes!

This is rife in Masters swimming as 99% of masters swimmers never get tested. I stopped masters swimming because two guys on my team were juicing and it was super obvious swimming reps of 100s/200s just how much benefit they were getting. Having said that one of them did end up in hospital with gall bladder problems due to steroid abuse so I do wonder if they think it was worth it gien they still couldn’t hit times we could do when we were 16.

Doubt swimming masters is any different. At least track and field tests.

39 year old taking steroids = stuck in the past

He didn’t get caught taking steroids.

This is yet another example of how unjustly Swimming Australia was treated with respect to waiting until the end of Worlds to make the positive test public. FINA waited until the appeals process had concluded before making this positive test public and that’s perfectly by the book because if the appeal annuls the violation it doesn’t need to be revealed at all! I’ll also add that making public at the end of Worlds is still far far sooner than the end of the appeals process. Swimming Australia did absolutely nothing wrong but were held to a much higher standard than so many others.

The treatment of Swimming Australia was probably magnified by Mack Horton, who was representing Swimming Australia and was protesting Sun Yang. Fellow Dolphins had their Instagrams get bombarded with Chinese trolls even if they’ve never talked to Horton much less agree with him because people automatically associate all of them together as one unit. People also forget that he was protesting to FINA specifically for letting dinged athletes competing not a specific individual.
I don’t understand why Swimming Australia, USA Swimming, etc keeps listening to their FINA management especially when they keep getting blamed for FINA’s mistakes. As shown here, they could easily run things more effectively.

^^^I agree that the Mack Horton effect has a lot to do with the blowback that Shayna Jack faced. While Mack and Shayna aren’t directly linked, given the rhetoric that was coming out about Sun from Australians, the response from the Chinese about Jack was fairly predictable.

A lot of the backlash didn’t come from the Chinese but from those who also agreed with Mack Horton. You only had to have a peek at the comments here to see all the Americans bashing Jack in a way they would never bash an American and there definite shades of sexism mixed in too.

Absolutely. It isn’t fair that Jack gets worse press because she is Australian but it is clearly due to how outspoken Swimming Australia has been on the issue of PEDs. They banned Sun Yang and other drugs cheats from all Aussie funded pools I think?

it bothers me after looking back on Shayna Jack and Conor Dwyer’s cases that people were for the most part so quick to torch Jack while defending Dwyer and Schoeman. I looked up to all these athletes, and hate to see something like this happen with any of them. But it bothers me that the sexism is clearly apparent in the case of Jack with people making fun of her and being cruel, while getting upvotes for the terrible words they said about her

The Cocaine Kiss defense didn’t exactly help her. But (I hope to God unintentional) misogyny is rampant on these boards and always has been. McKeever got pulverized more than any male coach years back. Hosszu has a particularly vocal critic. Many, many cases. But if you “look up to athletes” as some sort of moral compass, you’re often going to be disappointed. Jack Roach had a great comment on the Brett Hawke podcase. He said, when these true elites lose, they “grieve.” They’ll do anything to avoid grief. That’s not exactly psychologically normal.

The case has not been heard yet .so everybody jumped the gun . Fact is there have been cases esp in the US whete ‘ transference’ defence has worked .& the same substance received only a 3 month ban ( alleged contamination ) & another 6 mths . We shall have to wait . I think the comments are ot so much misogyny as just a dig at the 4×100 success .