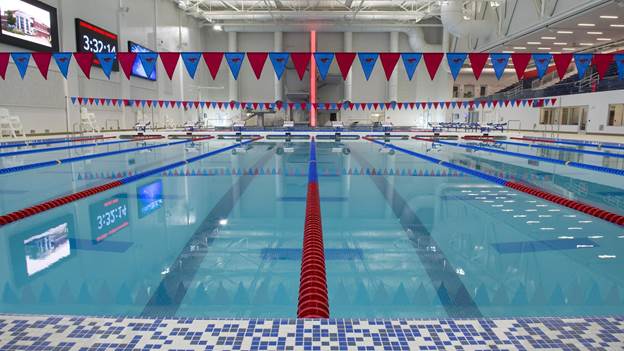 SMU will play host to the 2022 AAC Swimming and Diving Championships in February, as the Houston women and SMU men look to defend their 2021 titles. Current photo via SMU

The American Athletic Conference (AAC) has announced that the 2022 Men’s and Women’s Swimming and Diving Championships will return to the Robson & Lindley Aquatics Center on the SMU campus in Dallas, Texas. The Championships will be held February 16-19, and marks the second consecutive year that SMU will serve as host for the meet.

The AAC includes women’s only programs at Tulane, Houston, and ECU, along with men’s and women’s programs at SMU and Cincinnati.

The Robson & Lindley Aquatics Center opened in 2017, replacing the school’s legendary Perkins Natatorium. It is a state of the art, 8 lane 50-meter facility with movable bulkheads and spectator capacity for 800 people. The facility also includes a full 10 meter diving tower, as well as one and three meter springboards for the diving competition.

The 2022 AAC Championships will carry several interesting storylines into the meet. The five-time defending women’s champion Houston Cougars will be competing in their first season with new head coach Tanica Jamison after former head coach Ryan Wochomurka was hired to lead the Auburn program in April.  The women’s meet will also include a reinstated East Carolina program, which returns to the conference after not participating in the 2020-2021 season. In the men’s meet, SMU will look to defend their title after winning their first AAC championship in 2021.

The championships will also take place under a cloud of uncertainty for the conference’s swimming future, as both Houston and Cincinnati have accepted invitations to join the Big 12 by the 2024-2025 season. Barring new additions to the conference, the departures would leave SMU as the only men’s swimming and diving program in the AAC, and would leave the conference with only three women’s programs.

With only two men’s teams remaining in the conference, there has been speculation on SMU and Cincinnati trying to find other swimming homes for their men’s teams, but for this season, both schools still list the AAC Championship meet, essentially a grand dual meet.